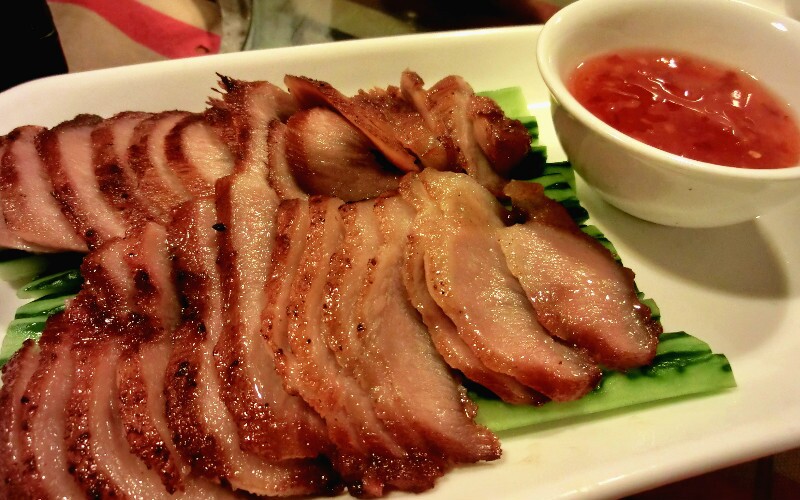 Guilin food is a combination of Cantonese and Hunanese cuisine. It is characterized by its sweetness and the delicate use of spices, particularly chili. Many foods are have a sour or spicy taste. Stir-frying and steaming are the most common cooking methods of Guilin food. Wild plants and animals, which are rarely eaten in the West, are sometimes found in Guilin Cuisine.

The following dishes are considered to be traditional dishes in Guilin.

Lipu Taro and Pork Loaf is a famous traditional dish of Guilin. This dish, which is popular at weddings and other celebrations, gets its name from Lipu (a county in the south of Guilin Prefecture). It is made with taro and streaky pork with meat, fat and skin. The meat is first cooked, then steamed with the taro, pepper, mashed onion, preserved Guilin bean curd, cooking wine, sugar and other condiments.

Snail shells are stuffed with minced pork and a small amount of vegetables and mint, and then cooked in a light sauce. They’re often a little spicy.

The most important feature of steamed Li River fish is its tenderness. When you put the fish in your mouth, you don’t even have to chew because it will melt itself and give you the best taste of fish you’ve ever eaten. Accompanied with a special sweet sauce, the steamed fish appears to be the best choice for people who prefer lightly flavored food.

Fish from Li River cooked in a local beer with some local vegetables is very popular in Yangshuo. The fish will contain bones and is served whole, but the meat tastes delicious. Read details on Yangshuo Beer Fish

This is one of the most famous and popular dishes in Guilin, and it often appears on family dinner tables. The most important ingredients are old duck and gingko (baiguo), which is a famous Chinese medicine. Stewing makes the soup tasty and nutritious.

The ingredients include a young chicken, two geckos, some lichee, and several pieces of ham. The gejie is a large nocturnal gecko, which eats insect, birds and small snakes. It is on the secondary national protected species list.

Deep-fried duck covered with a fresh lotus leaf, then braised, served with some pork, shrimp, mushroom and preserved ham.

Taking pride of place as the most popular local snack (or breakfast, lunch or dinner) in Guilin, mifen is pliable but strong, fragrant and mellow, and cheap (2.5 yuan for a bowl). Guilin rice noodles can probably be found within 100m of any town or city area. Read more on Guilin Rice Noodles

Oil Tea is a distinctive flavor of Guilin. Every county of Guilin has people who regularly drink oil tea; however the most famous oil tea drinkers are the Yao people of Gongcheng.

Oil tea is prepared by frying tealeaves with garlic, salt, ginger, chili, possibly other ingredients and of course oil (usually peanut oil) in a wok. Water is then added and the mixture boiled. The tea, which is more like a broth, is poured through a wickerwork sieve (or tea strainer). The leaves in the strainer may be pounded with a hammer-like wooden pestle to release the flavor. Oil tea has a greeny-gray color and a strong taste.

It is good for waking one up in the morning due to the caffeine content. It is drunk or spooned from bowls, and what in the West might be regarded as breakfast cereals – puffed rice and cereal balls, along with crispy fried dough sticks and peanuts - are added to the broth. Read more on Guilin Oil Tea.

Pickled vegetable often means pickled Chinese cabbage or pickled white radish, but carrots and chilies may also be served up pickled with vinegar and sugar. Pickled vegetables have a sweet and sour taste and are served as an appetizer at some restaurants.

It is a traditional snack in Guilin. They are usually eaten at happy events to represent best wishes and blessings for a happy life. The Chinese fa gao (sponge cake) has the same pronunciation as words that mean to grow taller or become higher, which again has the deeper meaning of becoming more successful and prosperous. The main material of the sponge cake is sticky rice and polished japonica rice. They are soft and delicious, with a pleasant fragrance.

The cakes are shaped like a horse’s hoof, which is another meaning of mati (water chestnut). They are made of water chestnut, flour, sugar and milk, with cocoa as dressing. They are usually sold in the cool season.

It is mainly made of sticky rice flour, polished japonica rice flour and brown sugar. The bright food coloring is like a flower at the top of the cake.

You can request to eat any one of the above tasty dishes, or anything else you would like to try, when customizing your tour with our travel advisers.

Based on your dietary requirements, our guide can give you some recommendations accordingly. He/she will lead you to find the authentic food hidden in the back-street.

Here are some sample itineraries for Guilin for your inspiration.