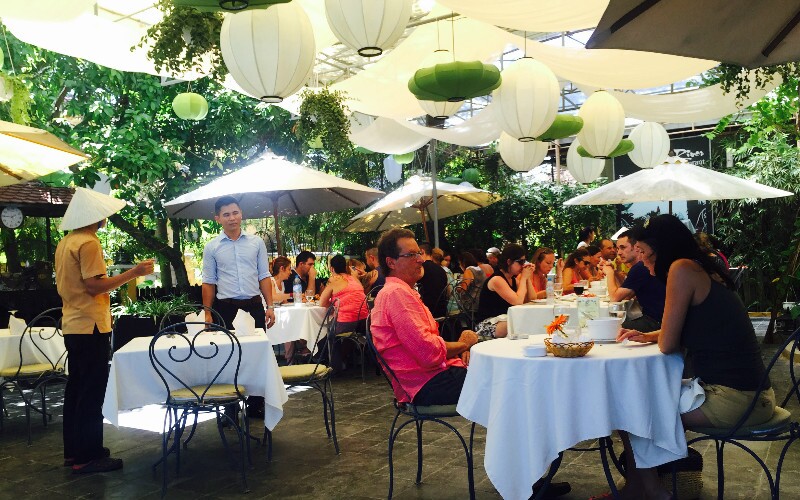 Hong Kong's multicultural. The stock Chinese culture is accented with British, and combined with tastes of South Asian, African and Filipino since there are big populations of people from those areas. Here is where to go for tastes of some sights, people, and food of these 5 different cultures.

For a Taste of Filipino On any Sunday morning or afternoon, you'll be amazed at the masses of Filipino woman who flock to chat and rest at their favorite area near the World Wide Mall in Hong Kong. There may be about 200,000 Filipinos living in Hong Kong, almost 2% of the population, and tens of thousands seem to gather around here every week.

The Filipino domestic helpers and laborers get just one day off during their week, and this is where they often go. They sit by the thousands grouped together on the sidewalks and pedestrian areas to enjoy their day off, or browse in the shops.

The World Wide Plaza Mall is opposite the Four Seasons and IFC Mall, and it has dozens of Filipino owned or staffed shops selling Filipino food and other articles and shops for money transfer. There is also a Filipino National Bank office there, and a Jollybee, the country's favorite Filipino-style fast food chain, is adjacent to the mall.

So if you want a taste of the sweet, sometimes salty, but bland Filipino food or get information and tickets for traveling to the Philippines, that is the place to go.

A Taste of African It is the favorite place for traders in China to go when they come back with suitcases full of clothes or other products. Unlike the South Asians, the African presence is relatively recent, spurred mainly by the past fifteen years of economic boom of China becoming the factory of the world. It is cheaper for Africans to buy Chinese consumer products than for them to make them themselves across the continent.

Professor Adams Bodomo estimated the city's African population to be about 30,000. But crises in Eritrea and Nigeria are bringing in hundreds of refugees from those areas recently.

Africans congregate primarily in Chung King but also in the Mirador that is about 100 meters north of Chung King. The Mirador is similar to Chung King, but smaller and more Chinese oriented with less foreigners.

Shopping: There is a little African store on the second floor of the Midador building that is something like 100 meters north of Chung King. It has been there for decades, and the shop owner say that it is well known even in Africa as the place to go when in Hong Kong. It has been there for decades. They sell some imported from Africa vegetables along with a lot of personal care products (shampoo and hair conditioners) along with canned or packaged food imported from Nigeria.

African dining: Unlike for the South Asian food, Africans and daring tourists have almost no places to choose from around Chung King and Kowloon as a whole except for the small, several small table sized African Restaurant on the first floor of Chung King. Don't go for breakfast though because it opens late and is still empty around noon because according to the owner, the Africans don't get out until the afternoon and evening. They serve West African food primarily. In the 1800s and before WWII, along with the British, Indians and other South Asians were the biggest foreign population. They came as workers for the British and military and police personnel. Some prospered as merchants and shop owners. Many settled around Tsim Sha Tsui and Kowloon where the army base was.

According to the 2006 census, there was a total population of about 70,000 South Asians (30,444 Indians; 20,864 Nepalis; 16,776 Pakistanis) but due to recent crises in the South Asia region, there has been an influx of asylum seekers and refugees to Hong Kong. Many South Asians are also doing business in China and use the Chung King Mansion/ Mirador Mansion area as a comparatively cheap place to stay.

Some stay at Chung King and Mirador where the South Asian influence is heavy. They make up perhaps the majority of hotel owners and staff in those buildings and have dozens of shops and businesses in them. So there is a mixture of temporary South Asian visitors, refugees, merchants, tourists, business people, and native born South Indians including many Sihks, Nepalese, and especially Pakistanis to see in the area. Dozens of Indian, Halal South Asian, and even Nepalese restaurants are in and around Chung King to choose from. There are dozens of South Asian owned food stores, electronics stores, and tailors, travel agents and money exchangers.

Special food buys: Food in Hong Kong is quite expensive, but in Chung King you can get good buys for Indian or Sri Lanka produced products such as bulk tea (half kilo (~40 HKD) and kilo bags), bulk spices (curry powder, tumeric, red pepper, etc.), ghee (the Indian canned butter product), and bags of dried fruits and nuts. Buying products there will not only spice up your diet with some tangy tastes but keep your wallet or purse bulging.

A Word of Note about Chung King Dangerous? Chung King became infamous about ten or fifteen years ago as a place for illegal and dangerous activities, and for slum-like conditions. Some of that remains, as well as some trash in the alleys surrounding, but much has changed fueled partly by the recent Hong Kong economic boom caused by a huge influx of cash spending Chinese tourists and shoppers and tens of thousands of Chinese involved in buy and carry trade over the border.

There was also a recent change of management, so there are many newly decked out hotels with small rooms but decent conditions and new ownership. Prices have doubled and tripled since a decade ago.

The Taste of Chinese Culture in Hong Kong? Two Chinese cultures: Chinese people raised there often live and travel abroad, and the older ones were raised under a British government. So most of the Hong Kong raised people think and act differently than Mainland Chinese. The difference in often stark when you see a noisy Chinese tour group clustered around a loud tour guide among the quieter, more independent Hong Kongers.

The local Chinese culture is Cantonese primarily. About 90 percent of Hong Kong's residents are considered Cantonese. So Cantonese food, language, and traditions are what you'll find in Hong Kong.

You can experience the Cantonese culture by eating, sightseeing, and going to a festival event.

Most of the Chinese restaurants around the world serve up something more akin to Cantonese food than any other regional cuisine of China. This is because so many of the restaurant owners and cooks come from Guangdong Province or Hong Kong. So foreigners are familiar with the style of cooking and like the local Cantonese food.

For everyday Cantonese food, just stop into any of the local noodle shops in side streets and residential and village areas. Noodle soups are popular as is dim sum.

We suggest Temple Street for new tourists for the local food and drinks and some souvenir shopping. It is easily accessible near Nathan Road in Tsim Sha Tsui.

For the best: Of course, the best Cantonese restaurants in the world are in Hong Kong. You can taste it as made originally, and the seafood is the forte. See our recommended Hong Kong Cantonese gourmet restaurants>>

Some small towns and areas are known for local cultural sightseeing. Among these, Kat Hing Wai, a walled farming village, and Tai O, a fishing village, stand out.

Kat Hing Wai (吉慶圍) is a noted Punti walled village in Yuen Long. The Punti were said to be the first people to settle in the region, and they speak Cantonese. It is home to about 400 descendants of the Tang Clan that founded the village in the 17th century.

Tai O is well known in Hong Kong as a place to sightsee the little stilt houses in the bay, eat, and go out in the ocean looking for the pink dolphins. The dolphins there have an unusual color, and people go out to where they frequent to spot them. The site gets a Certificate of Excellence from TripAdvisor in 2016.

Festivals are a way for tourists to savor the local people and culture. The most celebrated ones are Chinese New Year, Ching Ming Festival, Dragon Boat Festival and Mid-autumn Festival. Most of these are public holidays. Of all of these, the team competitions of the Dragon Boat races might most interest tourists.

Taste of the Proper Western Culture

The British founded the colony, but now the Caucasian British population are a tiny minority, below the number of non-Chinese Americans. You can taste the British influence in the street names, ferries and trams, and the in old architecture, as well as hear the British accent when the local Hong Kongers speak English. There are about 35,000 British nationals in the region. About a fifth of these are of Chinese descent.

The biggest number of Western expats by nationality are Australian with about 90,000 people. There were about 60,000 Americans in 2009.

Where To Go for a Taste of British Culture?

British architecture: There are old British buildings and forts scattered around the city. The Museum of Coastal Defense is a big old British fort where you can learn some about the local British history, and there are notable old buildings in Hong Kong Park.

Discovery Bay: Up until recently, Discovery Bay was the preferred residence of many English-speaking Western professionals and their families. But that is changing due to the influx of Asians. It is a private residential resort area. The enclave is difficult to access on foot since it is surrounded by rough country park hills. This makes the community of about 20,000 feel isolated from the rest of Lantau Island. Automobiles are not allowed, and road access is limited too.

The place is quiet and isn't actually all that "Western" feeling. It has a Hong Kong Chinese hi-rise apartment complex feel and look to it. But is probably the most Western area in Hong Kong now.

Tasting the Cultures of Hong Kong

If you want to taste the local flavors and try to cuisine of these ethnic groups, we can arrange a private tour for you! That is our forte, and we can serve up private drivers and vehicles and guides per your order!

Most tours won't take you to Discovery Bay, the African store and restaurant in Chung King and the Mirador, or to a Dragon Boat event, but our Hong Kong area tours such as our Half-Day Hong Kong Island Tour are customizable.

If you want to go to Macau too, you can learn information on How to Plan a 1-Day Trip to Macau from Hong Kong.