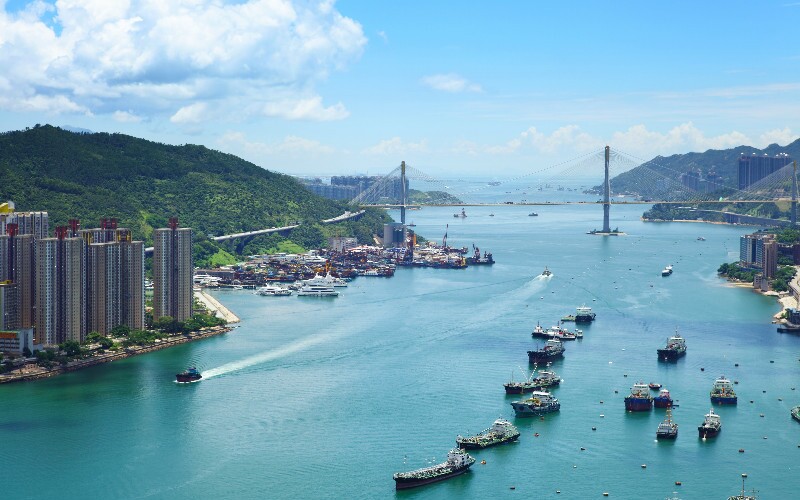 Hong Kong: Central is foreground, Victoria Harbor in the middle.

Hong Kong is in a league of its own.

It is the world's most popular tourist destination, Asia's best shopping destination, and China's most expensive city according to professional surveys and various news agencies. Hong Kong has the best Metro system in the world and many other other outstanding features.

Here is a list of 10 important facts useful for tourists and visitors.

1. HK's the world's most popular city for tourism!

Millions upon millions of tourists: The amazing little city beats out large London and every other city as a tourist destination by a large margin. 26 million tourists went to Hong Kong in 2014 according to Euromonitor International. In comparison, only 23 million went to second ranked Singapore.

The little region hosts almost half as many tourists as does all of China. About 26 million tourists came in 2014 compared to 56 million for all of China. The large majority come from Chinese mainland, but the city also gets millions of people coming from other countries.

What makes HK so popular?

Victoria Harbor and its surroundings are noted for being one of the most beautiful urban places in the world. For first-time tourists visiting for a day or two, the best places to go are around or near it:

According to Shopper's Survey in 2016, the city is the best city to shop at in the Asia Pacific Region. It is comfortably ahead of the other cities in their estimation with everything from entertainment and attractions to services to the quality of malls and shops to prices being among the best.

People from all over the world come to Hong Kong for bargains and high quality. They find Asia's best place to buy electronics, fashion, watches, and jewelry. The city's luxury stores do so much business that Hong Kong ranked first in the world for retail rental prices until the recent stock market crash in China. But Hong Kong still ranks second after New York in 2016. See 10 Shopping Facts>>

There is a less of a chance that products are fake in Hong Kong than in Chinese mainland, where there is still a stiff tariff on most kinds of items, so shopping in Hong Kong makes sense. For luxury fashion, buying in Hong Kong might be from 40 to 60% cheaper than in "China".

4. HK's one of the world's most expensive cities...

At the 5-star Mandarin Oriental Hotel in Central, room rates start at about 450 USD.

Beware tourists! The city has a gotcha. The hotels and rooms are quite expensive. Various news sources such as the Guardian ranks Hong Kong as first or second most expensive city to live in.

Pricey for rooms: The smallest and cheapest backpacker style rooms in dumpy Chung King mansions start from 250 HKD or 33 USD or so for four meter by four meter rooms with a hot shower. There has been a massive influx of Mainland tourists, shoppers, business people, and traders in the last five years. They are looking for bargains, so they've driven up the rates at the least expensive hotels.

Pricey for groceries too: In 2016, milk and other basic groceries cost 31 percent more than in New York. This is partly because most food is imported, but also partly because the Hong Kong currency that is pegged to the US dollar has risen.

5. You can see one of the world's most beautiful cities.

On most rankings, such as Buzzfeed's, Hong Kong makes it into the top ten of the world's most beautiful cities.

It is the jagged urban skyline of 300 skyscrapers, more than even New York, with the green Victoria Peak backdrop and the clean blue Victoria Harbor that is most memorable for tourists. The daily Symphony of Lights show also stands out.

6. And take advantage of the world's best metro system.

As a traveler, you can enjoy all the benefits of high technology, safety, cleanliness and fine planning to enjoy all the excellent highlights of this unique city. What's more, the cost for all the quality services and enjoyment provided is quite low compared to the rest of the world. It will whisk to you the airport from Central (13 USD) or Kowloon in 22 minutes or less. The MTR subway is a foreign tourist's friend to enjoy their time in Hong Kong.

7. It has one of the world's best airports too.

A tourist and business center such as Hong Kong needs one of the world's best airports. It was named Best Airport of the Year in 2016 by Air Transport World, and it has been named first by them and other organizations in other years over the last 15 years. More about Hong Kong Airport>>

The best time climate-wise extends from the end of April when it turns warmer and drier until the middle of December when it is cooler and usually dry.

Severe weather: But from May to September, there are occasional typhoons and violent thunderstorms. When typhoons approach, warnings are broadcast on TV and radio. Try to plan your trip around these.

The golden fall: For people from colder climates, the warm, dry, and often sunny days from October to the end of December will seem like a refreshing breeze. This is the best time for touring and sightseeing outdoors.

The best shopping season extends from the run up to Christmas and the after Christmas sales to Chinese New Year.

Avoid the major holidays such as Chinese New Year, May 1 holidays and the October 1 National Day holidays to avoid huge crowds and high prices.

The region has about the most relaxed visa policies in the world with visa-free stays for most nationalities. Citizens of about 170 countries enjoy visa-free access for durations of 7 to 180 days depending on the country. US citizens get 90 days. What's more, there is no visa stamp! It saves travelers valuable passport pages.

The city has a role as the Gateway to China with people passing through Hong Kong for easy access to China and Macau. See Top Chinese Mainland Tours from Hong Kong.

Macau, the sister region with Hong Kong, is 6th in the world as a tourist destination according to Wikipedia (15 million tourists), and tourists often like to visit both places and use the Hong Kong airport for transport. It is only an hour away by ferry. Get detailed information on How to Plan a 1-Day Trip to Macau from Hong Kong.

Shenzhen and Guangzhou are nearby on the other side of the border, and both cities rank near the top in China for people sourcing for products of all sorts such as electronics and clothing. Business people and tourists use the Hong Kong airport and hotels to get them on their way to Shenzhen and Guangzhou.

Air connections: It is located on the southeast coast of China on the South China Sea. People can take connecting flights to domestic Chinese cities. 3½ hours by air from Beijing and 2½ hours from Shanghai.

Train connections: Shenzhen is easily reached via the metro in an hour. From there, bullet train lines now reach Beijing in 10 hours and Wuhan in 5 hours. Perhaps in 2018, a new direct to Kowloon bullet train line will open. More about Hong Kong transportation.

Let us help you tour the amazing city of Hong Kong.

Do you want to tour Hong Kong with a local expert? Our professional guide will lead you to avoid the crowds, tell you the best places to take photographs, and explore the real Hong Kong.

Our most popular Hong Kong tours, for inspiration:

Do the above tours not suit you? See more Hong Kong tours. Just let us know your interests and requirements, and we will be glad to design a tour for you.