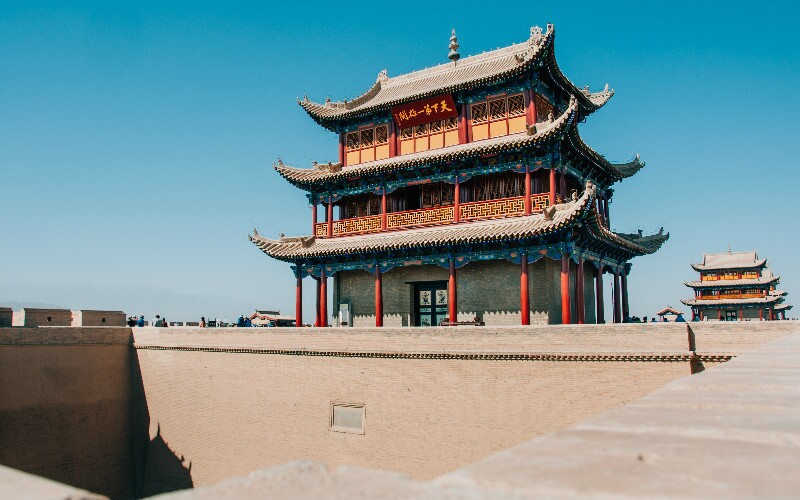 Jiayuguan Travel Guide - How to Plan a Trip to Jiayuguan

Located between Zhangye and Dunhuang, Jiayuguan is where the Great Wall and the Silk Road meet. It witnessed the passing of caravans and protected China’s medieval border from enemy invasion.

Jiayuguan was the western gateway to medieval China and marked the renowned western starting point of the Great Wall of the Ming Dynasty (1368-1644).

Top Things to Do

In today’s Jiayuguan, you can still find traces of the prosperous ancient Silk Road. The beacon towers on the ancient battlements are visible. You will see tall brick furnace chimneys pointing to the sky, large fort buildings standing side by side, and rows of poplar trees sheltering the wide streets.

In the Ming Dynasty, Jiayuguan was built across a narrow Gobi Desert pass and the pass fortifications were composed of defensive walls, gates, and army camps.

It gets its name "the First and Greatest Fortified Pass under Heaven" for its strategic, commanding position and grand presence.

The sunset at Jiayuguan Fort attracts the most people. The sunset glow tints the Gobi Desert red. The sky is usually as clear as a blue cloth without a cloud. The bronze-colored fortress walls look stately.

When you stand on the grand fort wall and look around, you may be able to imagine scenes of the past prosperity of the Silk Road — caravans moving slowly through the desert towards the fort.

Built on the steeply sloping valley mouth, seemingly hanging over its cliffs, the wall looks like a magnificent (exaggerated) Great Wall painting, hence the name.

The scenery is strikingly arid. To the north, the desert extends to the mountainous horizon; there are few oases north of Jiayuguan or to the east; to the south and west are steep dry mountains and gullies.

As the first Great-Wall-themed museum, dedicating itself to exhibiting the Great Wall culture comprehensively and systematically, Jiayuguan Great Wall Museum fully introduces the vicissitudes of the Great Wall from the Warring States Period (475–221 BC) to the Ming Dynasty (1368-1644) using schematic models, textual descriptions, and colorful pictures.

The best time to visit Jiayuguan is from May to October.

Jiayuguan City is in the Central Asian temperate zone far from any sea, and the climate is very dry. The temperature difference within a year or day is great.

The average annual temperature range (and that of middle season months April or October) is 3–15°C (37–59°F) and the annual rainfall is 80 mm. The coldest month is January with average daily low temperatures of around -13°C (9°F). Conversely, daily highs are around 30°C (86°F) in July.

How to Get to Jiayuguan

A few cities have direct flights to Jiayuguan, such as Lanzhou (1½ hours) and Xi’an (2½ hours).

Most flights departing from other cities such as Beijing, Shanghai, and Chengdu transit in Lanzhou.

High-speed trains are the most convenient way to travel between cities along the Silk Road. Urumqi, Turpan, Dunhuang, Zhangye, Xining, Tianshui, and Lanzhou have bullet trains to Jiayuguan.

Where to Stay in Jiayuguan

Jiayuguan is a small city. There are a few star-rated hotels, and most are economical. We recommend staying in the city center which is convenient for shopping and eating out at one of the following hotels:

It is said that, during the Ming Dynasty, there was a craftsman named Yi Kaizhan who was an excellent quantity surveyor. He could calculate exactly how much material should be used for construction.

The supervisor didn’t believe in him and asked him to calculate the number of bricks to be used for Jiayuguan Fort. Yi Kaizhan said that it would take exactly 99,999 bricks to build the fort.

Then the supervisor prepared 99,999 bricks and said if Yi Kaizhan had miscalculated, then all the workmen would be condemned to hard labor for three years as a punishment.

After completion, there was one brick left unused. The supervisor was happy at the sight of the brick and prepared to carry out the punishment. However, Yi Kaizhan said that the brick had been put there by a supernatural being to stabilize the wall and that even a tiny move would cause the whole structure to collapse.

The supervisor listened and dared not pursue the matter further. Therefore, the brick remained in place and was never moved. It can still be found there today on a tower of the fort!

Tour Jiayuguan with Us

If you are interested in traveling to Jiayuguan and don't want the hassle of planning and arranging transportation etc., you could just contact us with your interests and requirements, and we will tailor-make your ideal trip to Jiayuguan or a multi-stop Silk Road tour.