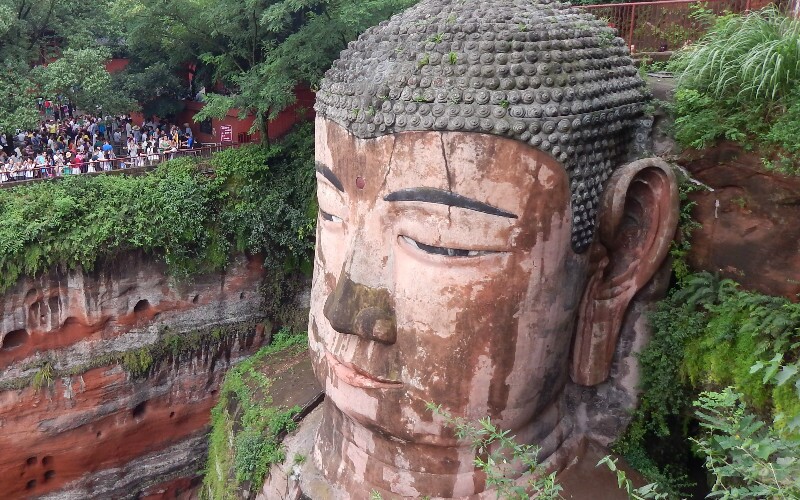 How to Get from Chengdu to Leshan (Leshan Giant Buddha)

Chengdu to Leshan by Train

Taking a train to Leshan from Chengdu is the best way to travel. There are over 20 bullet trains running between Chengdu and Leshan every day.

We have listed some bullet train schedules between Chengdu and Leshan above. You can use our Train Ticket Service to check all of the train schedules and to book your ticket(s).

Chengdu East Railway Station can be reached by Metro Line 2 and Line 7. It is about 30 minutes’ drive from downtown Chengdu.

Chengdu South Railway Station can be reached by Metro Line 1 and Line 7. It is about 20 minutes’ drive from downtown Chengdu.

Leshan Railway Station is about 14 kilometers away from the Leshan Giant Buddha. The best way to get to Leshan Giant Buddha from the station is to take a taxi, which takes 30 minutes. If you are traveling on a budget, you can take bus 3, 601, 605, or K1. This will take 40 minutes to 1 hour.Chengdu East Railway Station can be reached by Metro Line 2 and Line 7. It is about 30 minutes’ drive from downtown Chengdu.

Chengdu to Leshan by Long-Distance Bus

It is 2 kilometers southeast of Tianfu Square (which is in the city center), costing about 10 yuan to reach by taxi. It is near Exit C at Xinnanmen Station on Metro Line 3.

It is 8 kilometers northwest of Tianfu Square, which is a 30-minute journey. Chadianzi Bus Station is reached on Metro Line 2.

Note: There are many other long-distance buses heading to Leshan from Xinnanmen Bus Station, Chadianzi Bus Station, Chengdu East Bus Station, and Shiyangchang Bus Station in Chengdu. These buses will only arrive at Leshan’s bus station. You have to transfer to another bus or a taxi to reach the Leshan Giant Buddha after arriving there.

Chengdu to Leshan by Private Transportation

To help you create a hassle-free tour from Chengdu to Leshan and the Leshan Giant Buddha, we offer a private car to escort you directly to the destination, being efficient and comfortable. You will be accompanied by an English-speaking guide during the whole trip. Your ticket will be arranged in advance for you, and you can travel at your own pace.

Tour Leshan and See the Leshan Giant Buddha with Us

A private tour with a private guide and driver allows you to make the most of your time sightseeing without getting lost or needing to navigate. You can also control the pace of travel. Our local guide will show you the highlights and lead you to the best touring route. See our recommended Leshan tour:

Our tour can be customized. Just use our Create My Trip service to tailor-make your own tour.