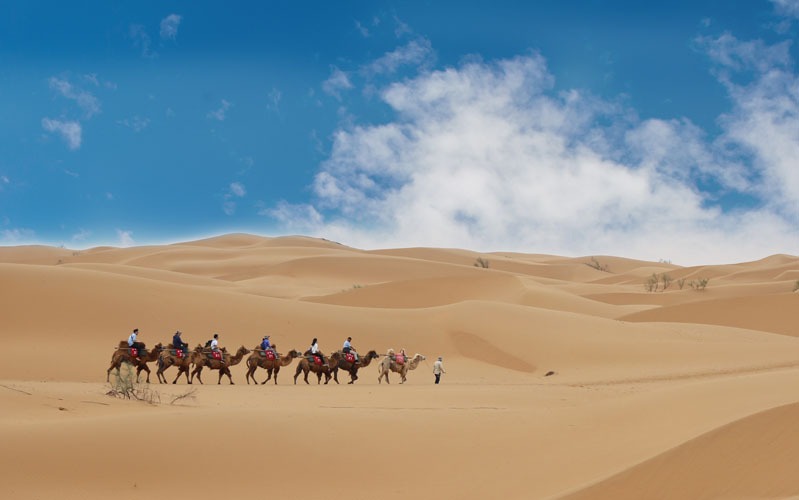 Top 10 Things to Do in Ningxia

Only 66,000 square kilometers (25,000 square miles) — the size of West Virginia or Scotland, Ningxia is one of the smallest provinces in China. China's three major climate zones converge there, which makes it enjoy a colorful range of landforms — desert, rivers, grasslands, mountains, plains, valleys… It also has many ancient ruins and colorful Hui culture to explore.

Find the top 10 things to do in Ningxia for some inspiration in planning a Ningxia trip.

Both adults and kids will have a happy time in Shapotou in Zhongwei. There are all kind of exciting activities including sand sledding, camel trekking, dune buggying, and more. You can also explore further northwest into the Tengger Desert, the fourth largest in China.

In Shapotou, you can work with sand wardens to plant wheatgrass squares. It could be one of the most unforgettable things in your trip. Contribute to making our world a better, less desertified place.

The Western Xia (1038–1227) was a dynasty established by the Dangxiang people in northwest China. The Western Xia Imperial Tombs in Yinchuan is the largest existing Western Xia culture site.

There are nine main mausoleums, which are said to be the burial places of the King of the Western Xia, his grandfather, his father and his descendants. But no one knows which grave they are buried in.

The tombs are in the shape of pyramids, hence its nickname: “the Pyramids of China”. There are many unknowns about them. Who ransacked the tombs? Why was the area of the Western Xia Royal Cemetery never hit by mountain torrents? Why were the tombs built in pyramid shapes?

Until now, no one has been able to decipher their architectural form and cultural connotations.

3. Learn about Hui Culture in Wuzhong

Wuzhong's Hui population accounts for half of the prefecture’s total population — the highest proportion of Hui in China.

There you can visit a Hui family, learn how to cook Hui cuisine, and enjoy morning tea with a full selection of Hui food.

The eastern foot of the Helan Mountain Range is located in the 37–39°-north-latitude zone, which is recognized as the best grape growing zone. There are 3,000 hours of sunshine per year (over 8 hours/day) and the soil is rich in minerals.

By 2020, there were 211 wineries in the eastern foothills of the Helan Mountains. They each have their own characteristics with beautiful scenery, stories, innovative winemaking, and more have gold medals for their products.

5. Experience a Desert Hotel in Zhongwei

Jinshahai Scenic Area (‘Gold Sand Sea’) has a special steam-train-themed hotel. The hotel was transformed from a steam train. It was a first-generation train traveling on the Baotou–Lanzhou Railway, China's first desert railway, in 1958. Each carriage is a room.

In addition to carriage room, there are wonderful desert tents. In summer, staying in the desert will give you an opportunity to see an amazingly starry sky.

You can also try many desert activities there such as sand sledding, camel trekking, and dune buggying.

Rock Paintings in the Helan Mountains

In ancient times, Helan Mountain Range was a place where the northern minorities such as Huns, Tujue, Tubo, and Dangxiang grazed and bred their herds and hunted.

There are around 600 pre-historic and ancient rock paintings on both sides of the ravine, which record the life of ancient mankind 3,000 to 10,000 years ago including their herds’ grazing, hunting, rituals, wars, entertainment, and copulation.

7. Visit the Ruins of Shuidonggou

Shuidonggou is the earliest paleolithic cultural site excavated in China. The Shuidonggou Ruins have fossils that date to the Later Paleolithic Age over 500,000 years ago as well as other ages. More than 30,000 stone tools and 67 ancient animal fossils were unearthed there.

The ruins were discovered by a Belgian archaeologist in 1919 and contain three main sites, the Shuidonggou site, the Great Wall of the Ming Dynasty, and the ‘Hiding Soldiers Cave’ site.

The Hiding Soldiers Cave (Cangbingdong) was used for hiding Tibetan soldiers and as a base for surprise attacks on invaders. You can also see the maze of tunnels in the cave, which were used as living quarters for soldiers during the Ming Dynasty (1368–1644).

56 kilometers (35 miles) from Yinchuan, near the Helan Mountains, Sand Lake is a little oasis set amid the sand dunes. The clumpy reed marshes that dot the clear waters of Shahu Lake are home to tens of thousands of birds.

Sand Lake is a theme park that revolves mostly around sand. It is divided into zones offering all sorts of sand-based activities. The most popular ones seem to be the camel rides and sand carving.

The Xumishan Grottoes are the largest grotto group in Ningxia with a history of 1,500 years.

Over the centuries, natural erosion had devastated the exterior appearance of these caves and grottoes. Treasured artistic contents in these caves had been mostly forgotten and abandoned since the decline of the Silk Road.

About 20 caves are in good conditions. These rival the renowned Yungang Grottos and Longmen Caves in artistic achievements.

These grottoes are distributed on 8 peaks that stretch for 2 kilometers. The fifth grotto (Giant Buddha Tower) is the highlight and also the symbol of the Xumishan Grottoes. The 20-meter-high Buddha statue in one of its niches is one of the few surviving large Buddha statues of the Tang Dynasty (618–907).

10. Visit the 108 Pagodas of Qingtongxia

The 108 Pagodas of Qingtongxia

Built in the Western Xia Dynasty, the 108 Pagodas of Qingtongxia is one of the largest and most neatly arranged Lamaism stupa sites in China.

These brick pagodas were all painted white but are now a pale earthy color. It is one of the few medieval Buddhist stupa complexes in China.

Seen from a distance, the giant triangular complex is quite spectacular.

Tour Ningxia with Us

All our tours are customizable. Contact us to create a trip according to your group size, time, budget, interests, and other requirements. Or see our most recommended Zhongwei tour for a starting point: