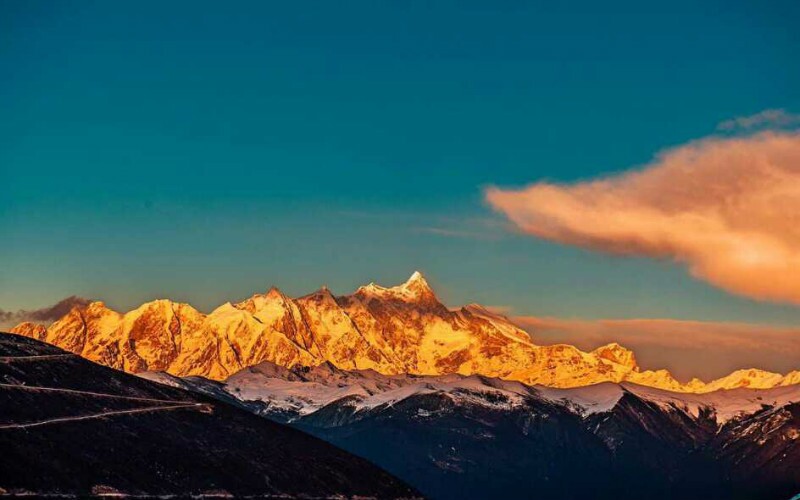 Difficult to get to and climb, Namchabarwa has only been attempted a handful of times. Unspoilt rugged scenery, snow-capped peaks, and hot springs, however, make  Namchabarwa a destination that most people, not just climbers, can dream of reaching one day.

The Meaning of “Namcha Barwa ”

The Tibetan Namcha Barwa (Chinese Namchabarwa) has many different meanings. One meaning is, “burning thunder and lightning.” Another meaning is, “the spear that shoots upright to the heavens.”

The Location of Namcha Barwa

Namchabarwa is a mountain in the eastern Tibetan Himalayas. The mountain is located inside the Great Bend area of the Yarlung Tsangpo River (later the Brahmaputra), at the part where the river enters the gorge across the Himalayas.

Namcha Barwa 's  main peak is 7,782 meters high. It’s called the Father of Icebergs. This peak is the highest of the Nyingchi Prefecture peaks. It’s also the 28th highest peak in the world.

The Namchabarwa peak is the tallest peak on the east of the Himalayas. Namchabarwa’s sister peak, Gyala Peri, rises up 7,294 meters.

The peak’s huge, triangular shape is covered with mist and deep snow all year round. It’s difficult for people to view the actual peak because of its snow cover. The foot of this peak has several hot springs and plentiful vegetation. The peak’s foot is a prime place for exploring and relaxing.

In 1912, British surveyors located Namchabarwa. However, the mountain was unvisited until Chinese climbers started trying to make the ascent in the 1980s.

In 1976, the 7,795 meter high Batura Sar mountain in the Karakoram was climbed. Mount Namchabarwa was then the highest independent mountain in the world that hadn’t been climbed.

Today, Namchabarwa is a popular location. Professional mountain climbers who are both local or from abroad have a difficult time making the ascent.

Since Namchabarwa is in such an isolated area, it doesn’t get many visitors. It’s not often that people from outside of Tibet make their way to this area.

Our Tibet tours don't cover Namchabarwa, but if you would like to go there contact us and we can arrange a visit. We have experience arranging mountaineering tours.