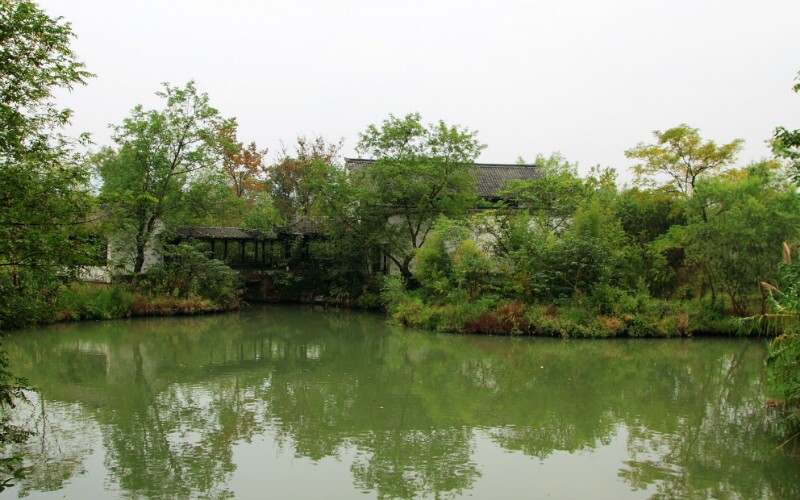 Top 7 Things to Do in Sanmenxia

Sanmenxia (三门峡 Sānménxiá /san-mnn-sshyaa/) is an inland city opening up to tourism. Its main highlights are a big dam on the Yellow River, some scenic park areas along the Yellow River and in the mountain gorges above, and particularly its museum.

The city is relatively far from more popular tourist cities such as Xi'an, so though the historical sites and sightseeing places are interesting, relatively few foreign tourists have gone there. But the recent completion of a bullet train line connecting Xi'an with Sanmenxia and Lingbao and Beijing might spur tourism. Here the our top 7 recommended tourist places:

The city's unique tourist attraction is this museum (三门峡虢国博物馆), built on the site of a major archeological discovery. The Guo State (1046–687) was a small one, but the treasures and a burial chariot that was found are major discoveries. It is one of China's best museums. The contents of the tomb date from about 900 BC. There are excellent quality bronze vessels, and the jade artifacts are striking. One of the main discoveries is 19 chariots.

According to TripAdvisor, it is the city's main highlight in 2016. It is on the north side of the city near the Yellow River which is another attraction to see.

The Yellow River is one of the longest in China, and at the site of the first dam on the river, a scenic park area attracts sightseers. The dam is 30 kilometers (19 miles) from the city's downtown area. At this point, the river is unusually broad, and the sunset reflection scenery is striking.

Many people want to tour the dam itself and learn about the history of its construction in the Cold War era. The dam caused a lot of controversy.

This scenic area (陕州公园 in Chinese, Shǎnzhōu gōngyuán) is a local favorite for its size, a Swan Lake where swans from the north winter, and the Baolun Pagoda (see below).

Near the pagoda, there are petrified tree trunks, an arch built in 1623, an ancient city wall, the city's municipal museum, and the China-Japan Friendship Arboretum. The variety of things to do in the park is quite broad.

Many go to the Shan Zhou park just to see the Baolun Pagoda (宝轮寺塔 Bǎolún Sì Tǎ 'Baolun Temple Tower') that was first built way back in the Tang Empire (618–907) era, rebuilt in the Jin Empire era in 1177, and reconstructed recently. It is considered only a small tower by the Chinese who generally appreciate far larger towers of a similar lengthy history in other cities.

Every city has a shopping street, and this one called 'Women's Street'  (女人街 Nǚrén Jiē) has both food stalls and clothing stores (mainly for female clothing and fashion clothing). If you are looking for a local place to shop and eat, this is where you can go.

Swallow Mountain Park (燕子山 Yànzi Shān) is a large Chinese mountain park. It isn't in the city urban area, but far out in the countryside in Lingbao (灵宝), a district of Sanmenxia. It is about an hour's drive on highway G30 from Sanmenxia and about 2½ hours east of Xi'an by highway G30. Alternatively, you could take a bullet train to the town.

It is the largest natural reserve of Henan and has rare wild animals. The peak is the highest in Henan Province.

This commercial pedestrian shopping street is more upscale than Women's Street. It has many sit down restaurants to eat that serve good food.

Silk Road travel is easy with us

About three hours east in Zhengzhou, Henan Province, there is another Yellow River Scenic Area you can visit.

Onward Tours to Xi'an and Beijing and the Silk Road.

Sanmenxia is now quite close to Xi'an and Beijing via the Sanmenxia South bullet train station. It is a fine idea to use the bullet train to travel along the Yellow River basin and to see Silk Road sites.

sanmenxia Sanmenxia Travel Guide - How to Plan a Trip to Sanmenxia