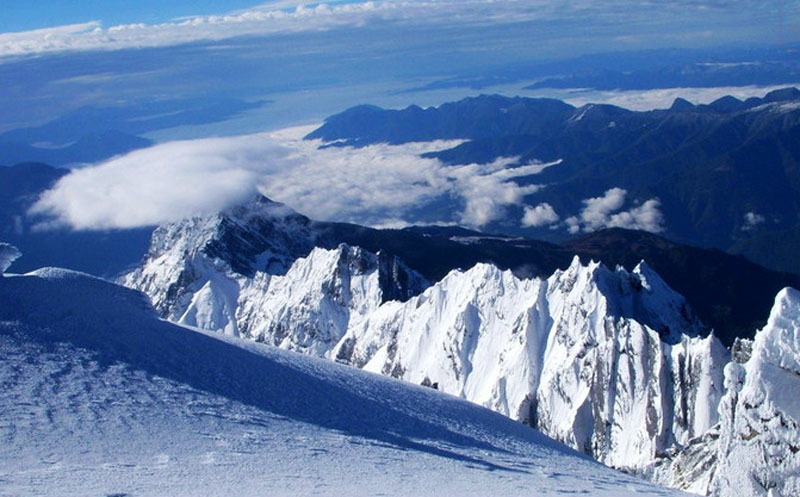 Haba Snow Mountain is located in the south-eastern part of Shangri-La County, 120 kilometers away from the urban area. It was sharply raised by the Himalayan orogeny and the subsequent Quaternary tectonic movement. The upper part of the mountain is gentle but the lower part is filled with cliffs, which makes the snow mountain precipitous, magnificent and mysterious.

Haba means 'the golden flower' in the Naxi language. In local folklore, Haba Snow Mountain and Jade Dragon Snow Mountain are considered to be brothers. The Golden Sand River — the upper reach of the Yangtze River — runs between the two high mountains, forming the Tiger Leaping Gorge which is the most spectacular site in this area.

The vertical alpine climate is formed because of the mountain's elevation, and thus the climates, such as subtropical, temperate, cool temperate and polar are distributed in ascending order. The difference in temperature between the top and the foot of the mountain reaches 23°C (75°F).

Such climates create a fine environment for many vegetation belts covering the mountain: alpine vegetation, meadows, shrubberies, conifers such as firs and spruces, evergreen broad-leaved forests, and shrubberies in the Dry-Hot Valley, supporting many species of plants and animals.

On the top of the main peak of the mountain snow persists throughout the year. The upstanding main peak, together with four little peaks around it, seems to be a shining crown on a fine day in the distance.

At about 4,700 meters above sea level, there are hanging glaciers resembling frozen waterfalls that flow down steep slopes. Those hanging glaciers are classified as maritime temperate glaciers in the southern latitude limit in China.

It is said that the strange horns, arêtes and U-shaped glacial valleys are the vestiges of ancient glaciers. The melted ancient cirques have formed many moraine lakes that are distributed over the elevation of about 4,100 meters. Among them, the Black Sea is the most famous one.

The Black Sea there is not the same as the Black Sea in south-eastern Europe. Actually, it is a lake that gets its name from the color of its water which is as black as ink. The deep Black Sea is mysterious and changeable according to the seasons.

What will really surprise you is that if you howl standing by the lake, it will drizzle and even rain heavily, drenching you. Such a strange phenomenon adds mystery and charm to the Black Sea.

An abundance of Chinese giant salamanders (娃娃鱼) will swim together forming a ring in the shallows of the Black Sea with an appropriate temperature is reached, which makes it more attractive.

In addition to snow peaks, lakes and azaleas, there are hanging springs and waterfalls in the scenic area.

Jianshan Waterfall is about 40 meters high. The sufficient water flow makes it spectacular. The water falling down the cliffs turns into a light misting rain. Then the seven-color rainbow appears in the sky as the result of the refractive dispersion of sunlight.

From April to June, when the azaleas are in full blossom and you visit Haba Snow Mountain, you will be surprised to find that there are so many varieties of azaleas. More than 200 hundred kinds of azaleas are distributed from the bottom to the top of the mountain, accounting for 70% of those in Yunnan.

The colorful azaleas, strange azalea trees, and petals in different sizes make a mass of color in the scenic area. When the azaleas come into bloom, the red azaleas and the white snow add radiance and beauty to each other. Moreover, the fallen petals are scattered here and there so that tourists can walk on the petal road, which is a unique experience on Haba Snow Mountain.

The main activity there is climbing and Haba Snow Mountain is the ideal destination for skillful backpackers or travel fans. However, a common tourist can climb up Haba Snow Mountain at the elevation of nearly 5,400 meters if he or she is well equipped and prepared adequately.

Affected by the monsoons, fresh gales blow in January and February. But the force of the wind falls in November and December, which makes them the best times to visit the mountain. May and June are also the best months because the azaleas are in full blossom at that time, and the mountain turns into a beautiful sea of azaleas.

Tourists can take a bus from Lijiang or Shangri-La to Haba Village and it will take about five hours.

Tourists can stay in Yunshang Haba Inn (it means 'Haba Inn above the clouds'), and go to the base camp by foot or by riding a horse the next day.