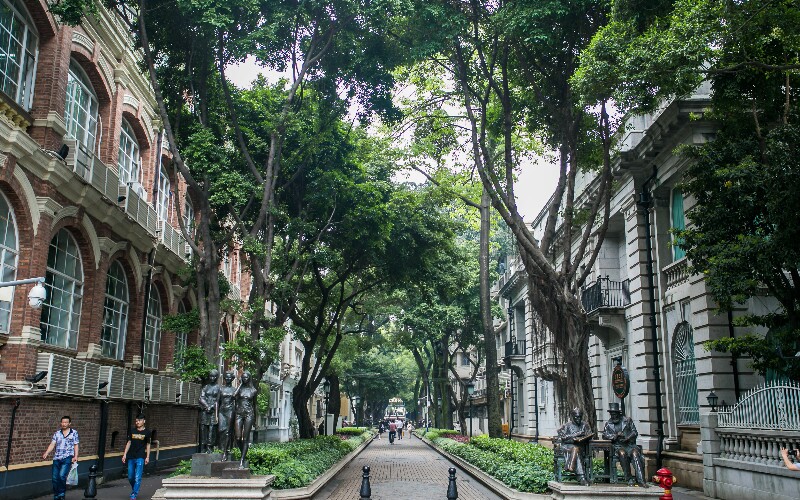 Guangzhou is a huge metropolis that is the capital of Guangdong Province with a background of Cantonese and Hakka settlers. Four touring routes are suggested if you want to see interesting sights. These four routes cover interesting sights in the city. The first route is in the central and eastern parts of the city along Metro Line 1, the second route is in the northern part of the city at a former European colony at Shamian Island, the third is for seeing cultural spots, and the fourth is for hiking a mountain park with temples and scenic sights. There are some special Guangzhou-style scenic spots along Metro Line 1 (广州地铁1号线) such as the Chen Family Ancestral Hall and the Shangxiajiu Pedestrian Street. These two places belong to the old urban area of Guangzhou that used to be called "Xiguan." The last stop on the route is the Tian He Sports Center is in the newly developed area of Tian He. Tian He is where the Guangzhou East Railroad Station is located. Metro Line 1 is a long subway route that starts at the Guangzhou East Railroad Station and goes directly south. So by taking this route, you can see both historical and traditional places and a modern part of the city.

Chen Clan Academy and Shangxiajiu are fantastic places to learn about the history of Guangzhou, and it won’t take you much time to visit these two places. First, you can take about half an hour to visit the Chen Clan Academy (Metro 1, Chen Clan Academy, the 10th stop from the Guangzhou East Station). It was an academy that was established during the Qing Dynasty times for people of the Chen clan. Then continue taking Line 1 south one stop to go to Shangxiajiu Pedestrian Street (Metro 1, Changshou Lu) where you can enjoy many traditional and special Guangzhou snacks. You can buy products economically on the pedestrian street. If you want, you can have lunch on the pedestrian street. Then go back north 9 stops to the Tian He Sports Center (Tiyu Xilu, Exit C). Walk about 290 meters to the sports center and see its saddle-shaped design. There is a square called Zhongxin Square, and you can see the new buildings and skyscrapers in the area. There are some important scenic attractions in the northern part of the urban area. You can take Bus No. 2 to visit Renwei Temple, a Taoist Temple that was first established in the Song Dynasty about 1,000 years ago. Then take Bus No. 181 to Shamian Island. It has a long history and was made leased as a concession area to France and Britain by the Qing Dynasty. Along with seeing the European buildings, you can eat typical Guangzhou cuisine, walk on the sidewalk of Shamian Island, and grab a cup of coffee leisurely when you are tired. In the end, you can go to Xiguan Residence to see the traditional old architecture in Guangzhou. If you want to learn about the unique history and culture of Guangzhou, here is a route to take. First visit the Shishi Sacred Heart Catholic Church that was the greatest in Guangzhou Parish by taking Bus No. 4. It is open on Sunday. The architectural style is Gothic. Then take Metro Line 2  (广州地铁2号线)  to visit Museum Of Nanyue King (Metro 2, Yue Xiu Park Station Exit B1). It is a historic and unique scenic spot of Guangzhou, and there are many cultural relics on exhibition in the tomb. Then you can get off at the Station of Sun Yat-sen Memorial Hall to visit the hall. The hall memorializes the man who is called the "Father of Modern China" who led the early 1900s revolution. In the afternoon, you can visit Guangxiao Temple and have a look at some precious Buddhist relics. There is the earliest iron tower in China named Xi Tower. In the evening, you can enjoy the beautiful scenery of the Pearl River (Zhujiang) by ship, or you can go to the Grand World Scenic Park to watch some dramas. White Clouds Mountain is a small mountain that is considered to be one of the symbols of Guangzhou. There are thirty or so peaks on it, and the highest measures 382 meters or 1,253 feet in height. It is the highest place in Guangzhou. You can do some walking and overlook the whole city from the top of the mountain. To get there, take Bus No. 199 to the south gate of White Clouds Mountain (Admission ￥5 RMB or about .80 USD). You can take a cable car to the mountain (25 RMB to go up and 20 RMB to go down, or 45 RMB or 7 USD for the round trip). You can choose to walk and climb stairs. There are some sights to see at Nengren Temple and Mingchun Valley (an extra 10 RMB). After getting down the mountain, if you still have enough time, you can take Bus No. 175 to see Yuntai Garden. There are many beautiful flowers all the year round in the garden.

China Highlights is your China travel expert. We can help you customize a walking trip around Guangzhou, or just see our Guangzhou Tours.