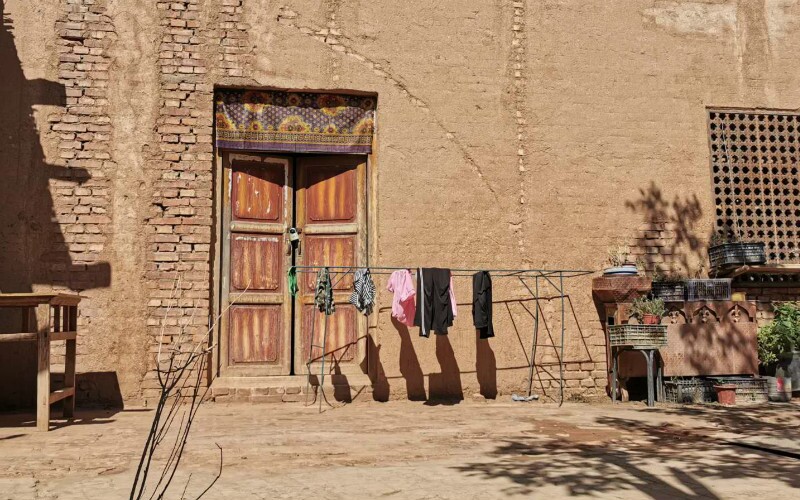 Xinjiang Uygur Autonomous Region has the largest area in China. There are a lot of hiking trails and spots in the region for adventure travelers to explore.

The great Tuyugou Valley is 47 kilometers to the west of Turpan City. The canyon clefts the Flaming Mountains north to south, from Subeixi Village of Shanshan Town to the Maza Village of Tuyugou. There are colorful mountains on both sides, and the highest peak of the Flaming Mountains is on one side. The canyon averages 1 kilometer in width. A stream runs at the bottom. Though the Flaming Mountains have a maximum altitude of a mere 851 meters (or 0.52 miles), it is still magnificent when you walk down in the canyon and look up to the sides hundreds of meters in height. It has some of the flavor of the Grand Canyon in America.

And the Thousand-Buddha Cave of Tuyugou Canyon (or the Milbudha Kavernaro) adds some mysterious atmosphere to this canyon. The Thousand-Buddha Cave is one of several Buddhist grottos in Xinjiang. People started carving it sometime around the Jin Dynasty (265 – 420 AD), and it flourished during the Tang Dynasty (618 – 907). Maza Village at the southern end of Tuyugou has a special Muslim holy site.

The Flaming Mountains are interesting. They are creased with canyons opening up north to south. These sun desiccated mountains have been whipped into flaming shapes by howling desert winds. Under the heat of the relentless sun, with evanescent desert mirages and with a dash of imagination, they may appear to be on fire.

Bogda Peak or Bogda Feng (博格达峰) is the highest mountain in the Bogda Shan range in the eastern Tian Shan Mountains. It is 5,445 meters or 17,864 feet tall, and it can be seen from Urumqi. Its sides slope at angles of between 70° and 80° near the top, and climbing to the top is very dangerous and takes mountain climbing skills. However, people can enjoy themselves walking around the base of the peak.

A possible route is the Daban to Bogda Mountaineering Base Camp to Mt. Tianshan Crossing route. In the south, this route starts from three villages of Daban on the southern slope of Mount Tianshan. From Daban, go to the Bogda Mountaineering Base Camp where you can see Bogda Peak directly. This is the place where people who want to climb the mountain usually camp at before starting out at dawn or before dawn to dare the peak. Near the Mountaineering Base Camp, you’ll see some gravestones of the climbers who died there including those of Dong Wuxin who was the leader of the Mountain Climbing Expedition Association in Urumchi and a Japanese woman.

If you go along the Dadong Ditch or the Jiangjun Ditch, you can go directly to Mt. Tianshan within a day. It takes three days to finish the whole hiking route. You can see grassland, glacial landforms, glaciers, alpine lakes, rocky peaks, alpine meadows, forests, valleys, and desert during the trek. At the end of the route, there is a famous scenic spot of Xinjiang called Tian Chi or Heaven Pool.

Nanshan is located in Tianshan Mountain south of Urumqi. It is about 70 kilometers or 40 miles south of Urumqi. The transportation is convenient. There is a highway that goes there. So Nanshan hiking is the most popular hiking area among the outdoor walking routes around Urumqi.

Nanshan is the southern Tianshan Mountain. It starts at the Torrey Township in the east, and then it stretches to the Tuen Mun River in the west. From east to west, it spans more than 40 kilometers (24.9 mi). After crossing the Tuen Mun River and continue walking to the west, you will find that the elevation increases. From west to east, Nanshan has many north-south gullies. Urumqi River that flows south to north is there. To the east of the Urumqi River, there are the Sheep Pen Ditch, Dadong Ditch, Shuixi Ditch, Banfang Ditch, East Baiyang Ditch and other valleys. To the west of the Urumqi River, there are the West Baiyang Ditch, Jinquan Ditch, Chrysanthemum Platform, Small Ditch, Xiejia Ditch, Miaoer Ditch and other valleys. The forests in these valleys are thick. Streams flow on the bottom of these valleys. Vast grasslands are on the slopes. In summer, the flowers flourish, and there are herds of cows and sheep on the mountain. Kazakh nomadic ranchers have lived here for generations.

Among those valleys, there are four east-west routes you can choose from. They are the Small Ditch to the Chrysanthemum Platform route, the Chrysanthemum Platform to the West Baiyang Ditch route, the East Baiyang Ditch to the Dadong Ditch route, and the Shuixi Ditch to the Dadong Ditch route. These are relatively easy routes for visitors. The elevations range from about 17 meters to 2,300 meters (0.01 mi to 1.4 mi). The slopes are modest, and the paths are clear. The scenery is very beautiful. Along the way, there are herdsmen grazing. You can hike for a day or two.

There are three popular hiking routes in Kanas.

The first hiking route is the eastern Kanas route that starts from the Jaden Valley and goes to Kanas. Along the path, you can see the beautiful Kanas River, the quiet Hemu River, the misty Hemu Village, the mysterious Black Lake, and then finally get to Kanas Lake. The whole distance is 78 kilometers (48.4 mi) on foot, and it takes three to four days to hike it. The hiking isn’t difficult, but it takes a longer time to finish the hike.

The second hiking route is the western Kanas route. It stretches from White Haba to Naren Ranch to Double Lake to Kanas Lake. It is a new hiking route. Along the way, you can go through the primitive forests and the mysterious Double Lake. The whole distance takes four to five days. It is a more difficult hike than the eastern Kanas route. So it is hard to cross over and takes a long time.

The third hiking route goes from Kanas to White Lake. It is very hard to cross over. It is suggested that suggested that tourists don’t hike this route.

Apart from the Kanas area, the Keketuo Lake and the Eerqisi River have indescribably beautiful scenery.

China Highlighs are your China travel expert. see Why Choose Us? We can help you customize a trip to Xinjiang including a walking experience.