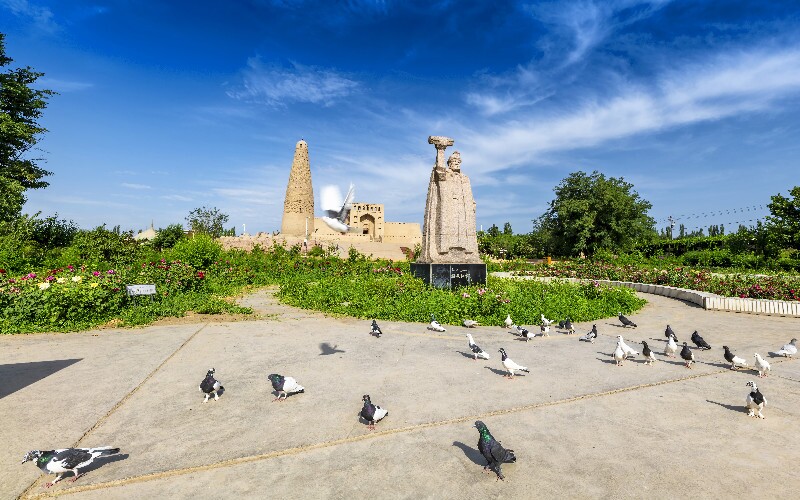 Turpan Travel Guide - How to Plan a Trip to Turpan

Turpan is a mostly Uighur city of about 300,000 that is quickly being developed as a "model" city in China. It is a Xinjiang travel highlight because the culture is still mostly Uighur, there are several historical sites and places of unusual natural scenery close by it, and travel to it is relatively easy because it is close to Urumqi and along a rail line and highway.

Turpan is interesting because the city is in the Turpan Depression that is either the 2nd or 3rd deepest depression on the planet. The city of Turpan itself is at the edge of the depression to the south of Bogda Mountains.

In the vicinity, you can see and climb big sand dunes without vegetation, and see the Flaming Mountains, the ruins of two ancient cities called Gaochang and Jiaohe, a tall minaret called the Emin Minaret that was built in 1778 , the ancient karez water system, and lots of fruit trees, grape fields and Uighur houses.

The interesting sites, except for the salt sea to the south, are all nearby on roads that go east and west.

The Jiaohe Ruins dating from 100 BC to the 13th or 14th century are to the west of Turpan following a road 10 kilometers or about 6 miles.

Within the Turpan city area is the Karez Wells and Karez Museum tourist site.

Going east out of the city on a road for about 1.6 kilometers or a mile, there is the Emin Minaret that dates to 1778 (almost as old as the United States).

Following this road about a kilometer north, there is a road called G312 that goes east along the foot of the Flaming Mountains. The Flaming Mountains is a ridge of hills that runs east and west. After going east for about 30 kilometers, G312 turns left. At the place it bends, there is a bus station called Huoyanshan Bus Station. At this point, three main sites can be found aligned north and south.

Following G312 turning northwards and then turning left on a side road, after about 7 kilometers or 4 miles there are the Bezeklik Thousand Buddha Grottoes.

Roads going south from near the bus station go to the Astana Tombs and then further onwards to the Ruins of Gaochang in Erbaoshang that are about 6 kilometers or 4 miles south of the bus station.

Near the southern edge of the Turpan basin is Lake Aiding that is the lowest point of the depression. Its water level varies, but it averages about 154 meters or 505 feet below sea level. This makes it the world's second or third lowest salt water lake. The lowest salt water lake is in Israel, and there is one is Africa that is at the same negative elevation as the Aiding Lake.

One cool thing about Turpan is that it has unusual weather. It is very sunny and dry, it hardly rains, and the summer temperatures are high. But because it is so dry, it makes the weather more comfortable.

The basin is known as about the hottest place in China. In the summers, the temperatures in Turpan sometimes hovers about 45 degrees Celsius or about 113 degrees Fahrenheit. Because it hardly rains, the old architecture of the ancient cities and the minaret are preserved. The old cities were made of mud and clay.

Turpan is said to get about 3,200 hours of sunshine a year which means that it is usually sunny during the day. This is so sunny that China is turning part of Turpan into a model modern city that uses mainly solar energy or other types of renewable energy sources for electrification.

The weather is so dry that people can often see the moon during the day. Unless the new construction stirs up too much dust or causes too much pollution, people may find this clean and dry environment interesting and refreshing.

Much of the area around Turpan is farmland with vegetables and fruit. It is a very lush irrigated area. Water flows via underground viaducts that are thought of as one of Asia's big ancient construction projects. They are worth a visit and are part of what makes visiting Turpan a travel highlight.

Uighurs are unusual people. They are a mixed people that speak a language that is related to Turkish. Visitors may not feel that they are in China.

The food is very good because the vegetables and fruit in the region is said to be about the best in China.

One interesting thing about Uighurs in Xinjiang is that an unusually high percentage of them are older than 100 years old compared to the rest of the population of China. They are Muslims and so don't eat pork and try to eat kosher food as a rule.

Despite of its extremes of temperature, Turpan is known for its grapes, watermelons of several colors, cantaloupes, apricots and raisins. Turpan produces about 80 percent of the raisins produced in China!

About 85 percent of the grapes are green grapes that are air-dried. The hot and dry weather makes them sweet. There is as yet little use of pesticides, so you may find them unusually delicious.

All this fruit can be eaten fresh. You can buy it from the Uighur farmers directly from their carts or stalls. They are known for fair and low prices and for sometimes giving fruit away. The fruit is also made into fruit juices and wines. The wines often taste unusually good though wine connoisseurs may think that the wines are primitive.

How to go there

During the summers in July and August, the high temperatures average about 39 degrees Celsius or 101 degrees Fahrenheit, but the dry climate makes the weather feel more comfortable than it sounds. In the evenings, the weather is warm or perfect. A lot of fresh fruit and vegetables are harvested from July to October. You might want to go then when it is cooler and eat the fruit.

Turpan Uyghur food is generally like Moslem food in the rest of China, but they use fresher ingredients. They also eat more diary products.

Uighurs like dried fruits and nuts, and a typical breakfast might be bread and tea with yoghurt, almonds, olives, honey and raisins. All over China, Uighurs are known for big nutty fruitcakes that taste really good if it is well made.

One good thing about Turpan's agricultural practices is that they still haven't started to use as much pesticides on the grapes, vegetables and fruits as farmers apply in the rest of the world. So the fruit and fruit products may taste unusually good to those who are not used to eating organically grown food.