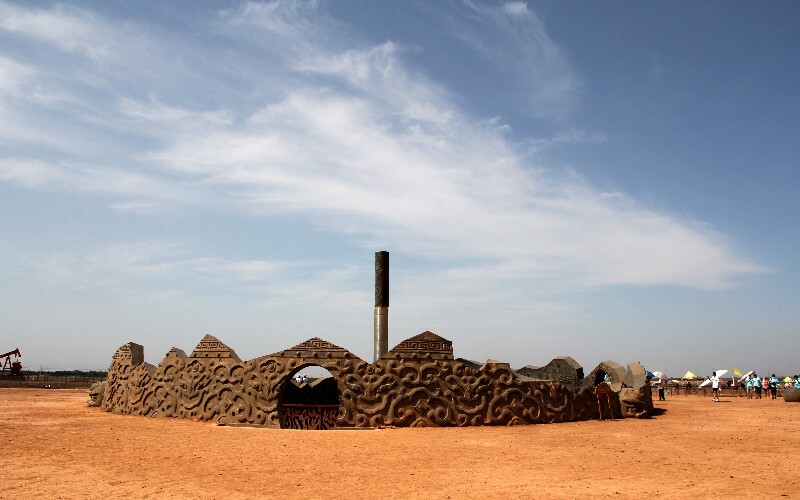 The Journey to the West is a famous story written in the 1500s by a writer named Wu Chengen during the Ming Dynasty. It is now a children's fable, and in China it is shown in cartoons. A Buddhist monk on his way to India runs into a wall of flame. The story is based on an account of a monk who went to India in the 7th century and passed by the red sandstone ridge that is about 9 or 10 kilometers wide. There are about 8 canyons that go through it. One of them is called Tuyugou Valley or Toyoq Valley and another is Grape Valley that has become a theme park. Turpan and northern Xinjiang is an interesting area for scenery and touring, and the Flaming Mountains is one of the sites you'll see in a trip to Turpan.

The Flaming Mountains are hot. In the summer, the ground surface temperature can reach 80 degrees Celsius or 175 degrees Farhenheit. In the summer, the waves of desert heat and mirages dance on the red ridge that is furrowed by parallel gullies. So it does look like a wall of flames especially in the afternoons in a red sky. That is quite interesting to see. You can see the big ridge from anywhere, and if you are driving along Road G312 that follows the Flaming Mountains at the base going east and west, you can ask your driver to stop at some quiet place where you can have a walk and take photographs in some solitude.

There is a Flaming Mountain museum with a big thermometer, and a lot of Chinese tour groups go there. There are camel rides and kids excited about the Journey to the West and the characters like the Monkey King. The fee for the museum is about 40 RMB or about 6 USD. There are other tourist places and tourist traps as well. Grape Valley is only about 11 kilometers or 7 miles from Turpan by road. A lot of tour groups go there for a place to rest in an oasis-like area and to eat a lot of freshly picked fruit. There are 220 hectares of grapes (more than 500 acres of grapes) and 200 acres of other fruits. Plus lots of raisins of different varieties and freshly made wine and ethnic handicrafts such as Chinese Persian Uighur rugs. A more primitive Uighur theme park area that has a lot more authentic Central Asian culture and a lot of important historical sites is only about 70 kilometers east of Turpan. It is called Tuyoq or Tuyugou Valley. Comparatively few tour groups go there though the southern part of the valley where Mazar Village is is only about 15 kilometers east. Besides having meals at Uighur houses, and seeing ancient places, people can hike above the town on the Flaming Mountain sides of the Tuyoq canyon and take interesting pictures of the surrounding desert and Mazar Village from above.

Since The Tuyoq Valley had water and was a pass for travelers into the basin area, there were settlements of a of Celtic-like people who until recently were unknown at the Subeixi Village area in northern Toyoq Valley and near Mazar Village from about 3,000 BC to at least 177 BC. These people also  lived at Gaochang and Jiaohe.

During very ancient times when caravan traders passed through the area as they went to or from China, the Turpan area was a place to trade, get provisions and rest. Nowadays, people tired after touring the sites in the desert may enjoy these two small valleys that are like oases in the desert.

China Highlights is your China travel expert. We can help you customize a tour to explore Turpan and other places on the ancient Silk Road, or just have a look at our Silk Road Tours

2) Season: Fruit is harvested between July and October The Turpan area is cold in the winter with high temperatures around freezing.

3) Sunburn: The Flaming Mountains have no vegetative cover. There are few clouds. Just rock that reflects the sun. So if you want to spend time on it, cover your skin.

4) Fee: The museum at Flaming Mountains costs about 40 RMB or 6 USD. Unless you go to a ticketed area like Tuyugou Valley or Grape Valley, travel is free. If you come to an inhabited place, respect the people's properties though.

The Bogda Mountains that are about 120 kilometers to the northwest in a straight line and the Tianshan Range and the South Pastures greatly contrast the deep and flat Turpan Depression and the hot Flaming Mountains. The peaks are very tall. Bogda Peak goes over 5,200 meters or 17,000 feet. There are even glaciers on the mountains. You can hike and ride horses in forests.