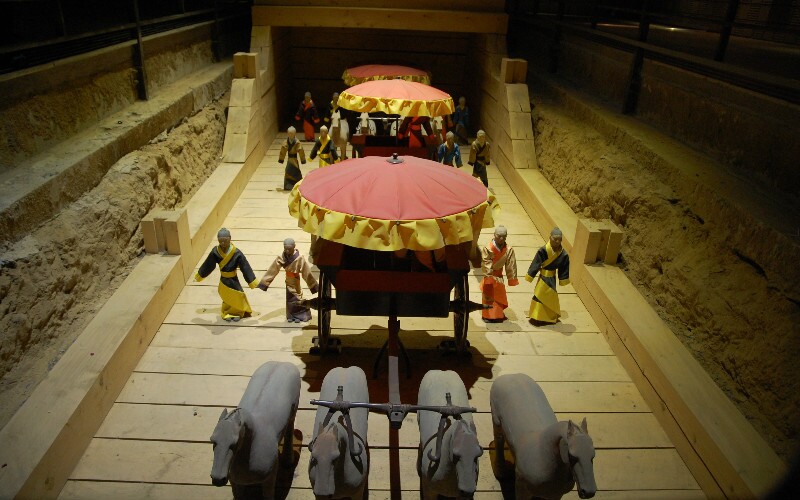 The Han Empire (206 BC – 220 AD) was the longest lasting dynasty in the last 2,200 years. Its population tripled, it became more Central Asian through Silk Road trade, was remarkably similar to other large empires, and was finally devastated by huge natural disasters and battles as it divided into the Three Kingdoms.

1) The mighty and huge Han Empire was conquered by a peasant.

Liu Bang (256 BC – 195 BC) was a peasant in the tyrannical Qin Empire. Their massive wars of conquest and expansion, vast construction projects that killed almost half the population, and high taxes made the Qin court very unpopular. There were murders and conflicts within the court, and their mistreatment of the people caused people to rebel all over the empire.

Liu Bang led an army that captured Xianyang, the Qin capital city, in 206 BC and ended the Qin Empire. Then he conquered territories and defeated rival armies to emerge as the Emperor of the Han Empire in 202 BC.

2) The Han Empire was the longest lasting empire in the region.

The Han Empire had the longest duration of any empire in a 2,100 year era of imperial rule. It lasted 426 years or about 100 years longer than other long lasting ones such as the Tang and Qing. Even though the dynasty was interrupted by a coup in the middle called the Xin Dynasty (9–23 AD) and divided into two eras called the Western Han (206 BC – 9 AD) and Eastern Han (25–220 AD), after the division, stability returned and the same dynastic clan continued ruling.

The Silk Road wasn't a road, but various paths followed by traders and travelers.

From about the year 120 BC, the Han court under Emperor Wudi (156–87) conducted much regular trade with countries west of China.

The Han major export was silk, and they imported horses, glassware, and precious metals. The trade usually involved large caravans that traveled to Chang'an (today’s Xi'an) that was the capital city. The trade made the empire wealthier, and the empire became more like Central Asia culturally. Central Asian Buddhism was adopted.

A court eunuch during the Eastern Han era innovated the standard paper-making process in AD 105. The oldest known piece of paper with writing on it was found in the ruins of a Han watchtower that was abandoned in 110 AD. Before his invention, a rougher kind of paper was in use.

5) The Western Han and Tang Dynasties were strangely alike.

Though separated by 800 years, the empires of the Western Han and the Tang were similar in many ways:

6) The Han Empire was much like the Roman Empire in size and population.

The Western Han Dynasty lasted about 215 years. During this time, the population grew from 18 million people to the census record of about 57,700,000 million people in 2 AD. By the end of the dynasty, some of the cities had grown to be among the largest in the world though none were the biggest.

8) The latter Han Empire was devastated by natural catastrophes!

The Yellow River is now shallow and tamed due to damming, but in the late Han era, flooding brought famine to a large area.

In the last decades, famine in the north and flooding along the Yellow River forced the migration of large numbers of peasants and others off their farmland, and they starved. In the year 194, there was a great famine due to a plague of locusts. There were outbreaks of plague in AD 151, 161, 171, 173, 179, 182, and 185.

9) The corruption at the end of the Eastern Han Dynasty was so bad that the people revolted.

In the last decades, two emperors named Emperor Huan (132–168) and Emperor Ling (156–189) lived decadent lives. It was said that they spent their time with hundreds of concubines and let the eunuchs rule the empire. Assassinations and fighting between rivals for power was common all over the empire, and the empire's money was wasted for luxuries during this time of crisis.

The peasants were oppressed by high taxes and believed a series of devastating natural disasters were a sign that Emperor Ling was corrupt and had lost the Mandate of Heaven. So the peasants and others rebelled in various places. The widespread Yellow Turban Rebellion and the Five Pecks of Rice Rebellion in Sichuan both started in 184. The first rebel armies were defeated in most of the empire except Sichuan.

The Battle of Red Cliffs was one of the 10 biggest battles in world history. The Han Empire was dividing into three warring kingdoms. The northern kingdom led by Cao Cao attacked the southern kingdoms led by Zhuge Liang among others. Between 270,000 and 850,000 personnel participated in this battle according to various estimates.

Cao Cao chained his invasion fleet together on the Yangtze River, and the southerners with only 50,000 men were able to defeat the vast northern army by sailing blazing ships into them and burning them. Then Cao Cao retreated, and the retreat turned into a deadly rout of the famished and sick northerners who were chased down by the Southerners.

Our tours are fully customizable — tell us your interests and requirements, and we'll help you to design a personalized Xi'an tour.