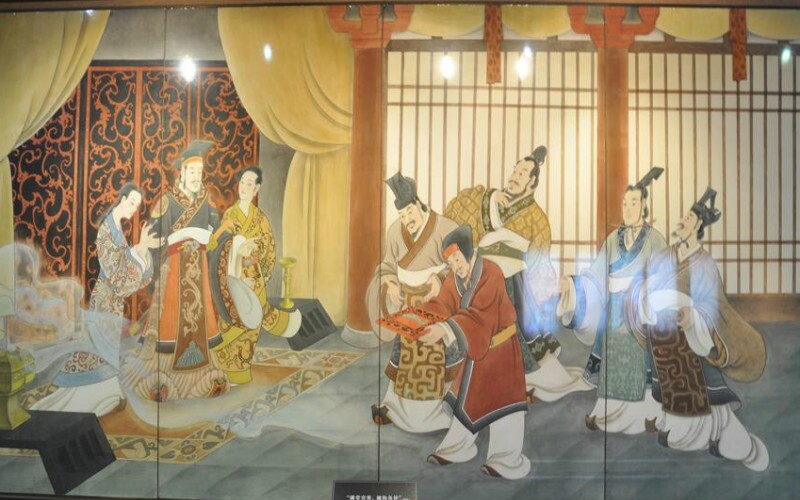 Liu Bang (256–195 BC), also called Emperor Gaozu when he ruled, was the first emperor of the Han Dynasty from 202 BC till his death. Rising from a humble peasant background, he become an outstanding politician, strategist, and finally emperor. He made great contributions to the development of the Han people and its culture.

Liu Bang was born to a peasant family in 256 in Fenyu Village (枌榆社), Zhongyang Township (中陽里), Feng County (豐邑) in the state of Chu during the late years of the Warring States Period (475–221 BC).

The young Liu Bang was outspoken, charismatic and of great generosity and forbearance. However, he enjoyed loafing, disliked reading, didn’t show any interest in farming and manual labour, and frequently ran into trouble with the law.

Later he became a low ranking official and started to become well-known among the neighborhoods. He happened to see Emperor Qin (The First Emperor) in his gorgeous carriage one day and it impressed him so much that he started to develop strength in his own character also.

The Qin Dynasty (221–206 BC) that ruled at that time had an oppressive and cruel regime. Maltreatment of the people made the Qin court very unpopular and provoked rebellion all over the empire.

Liu Bang rose in rebellion against the Qin Empire in the late Qin Dynasty. He conquered territories and defeated rival armies to emerge as the Emperor of the Han Empire in 202 BC. He established the Han Dynasty (206 BC – 220 AD) that lasted for over 400 years, the longest dynasty in the history of China.

The Han Empire has the honor of being the dynasty with the longest duration in the whole 2,100 year era of imperial rule in china. It lasted 426 years or about 100 years longer than other long lasting dynasties such as the Tang and Qing. The rule was interrupted by a coup in the middle by the Xin Dynasty (9–23 AD) which divided the whole period into two eras called the Western Han (206 BC – 9 AD) and Eastern Han (25–220 AD). After the division, stability returned and the same dynastic clan continued ruling.

After the tyrannical rule of the Qin Dynasty, Liu Bang’s rule allowed more freedom. He showed particular concern for reviving the rural economy and for lightening the tax burden on the peasants.

Though generally humane in civil matters, he dealt harshly with those who threatened his reign from within China. He tried to win the support of the common people by treating them less harshly than the Qin rulers before him.

He allowed other leaders to have kingdoms in the eastern part of the empire, and they spread over most of the territory of the empire. The imperial court had direct power over the western third of the empire.

Cultural Values of the Han Empire

Liu Bang inherited a large empire and the foundation of imperial rule laid by the Qin court. He utilized a standardized written language for the whole empire that had been promulgated by the previous system.

Liu Bang also inherited the military technology and tactics that had enabled the Qin Dynasty to form their empire.

He laid great emphasis on Confucianism. In his early days, he disliked reading and scorned Confucianism. After becoming the emperor, he still held the same attitudes towards Confucianism but his favorite Confucian teacher convinced him of the need for the philosophy, which he then accepted and promoted.

The Legend of the Dragon (Liu Bang)

Liu Bang was often thought to have the semblance of a dragon. The dragon is an important symbol in China. In the Chinese zodiac, it symbolizes power, nobility, honor, luck, and success.

Liu Bang was wounded by a stray arrow during the campaign against Ying Bu. He became seriously ill and remained in his inner chambers for a long period of time. He died in Changle Palace (長樂宮) on June 1, 195 BC and was succeeded by his son Liu Ying, who became historically known as Emperor Hui.