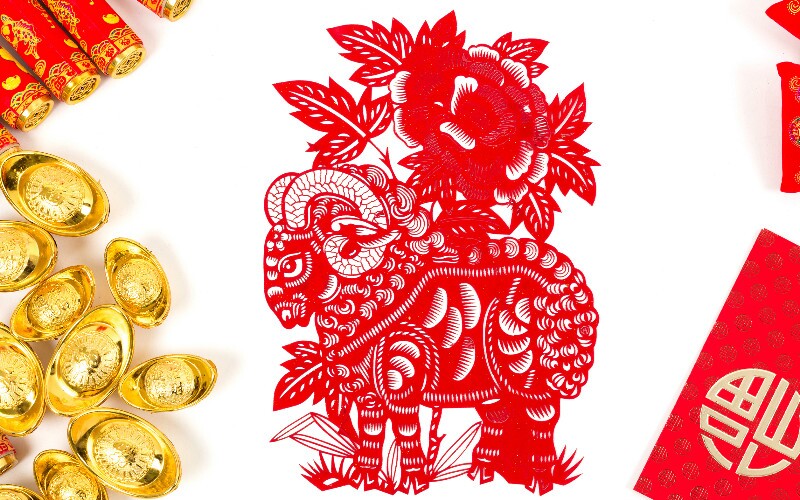 Serving as the Main Food for Health Preservation

The legend of "the Five Goats Bringing the Grains" has spread since the Zhou Dynasty (1100 – 221 BC), when the ancient Chinese people had just entered a civilized society from the primitive times, although animal husbandry was well developed then.

A material base was necessary for the ancient Chinese nation to become a civilized society and progress was first made with animal husbandry, solving the problem of hunger for the people due to the tamed goats.

After mastering the methods of taming wild animals, the ancient people had surplus food, featuring meat from the five domestic animals (horse, ox, goat, chicken, and pig) as the staple food, and mutton has been considered a healthy food since then.

The traditional Chinese character "犧" (written as "牺" in simplified Chinese) also has the radical of "羊" on the upper right part, and it literally meant an animal of a uniform color for sacrifice in ancient times. Nowadays, it means making sacrifices for others, which fully symbolizes that the goat has made a great sacrifice for the progress of the Chinese nation.

The Goat symbolizes pureness and preciousness due to its natural beauty. The original meaning of beauty originated from eating delicious food, so it was with this aesthetic sense from the ancient people that the form of the character "美" (meaning "beauty" or "tastefulness" in Chinese) is inferred.

The simplified Chinese character "美" is composed of the radicals "羊" on the upper part and "大" (meaning "big" in Chinese) on the lower part, and it literally means that "the big goat is beautiful", so the initial aesthetic sense of the ancient people came from the taste of mutton. In this sense, the adoration for the taste sensation is the source of the aesthetic activities for human beings.

According to the form of the character "美", another version of the origin of the Chinese character "美" comes from the people who wear goat horns while singing and dancing during their work or festivals.

From the perspective of the ancient people, the Goat symbolizes goodness, and a small goat was used as a comparison to the noble qualities of the ancient scholar bureaucrats in an ancient poem from The Book of Odes, The Goat.

The ancient people usually hung goat heads on their door lintels at the beginning of the Spring Festival, and also sent goats to one another as gifts. Goats even served as the dowries for brides in ancient times, and it was said they would bring good luck to the couple.

Both fish and goats are suitable for cooking because neither of them have an odor when used in cooking, which was something the ancient people had learned in their daily lives.

The simplified Chinese character "鲜" (meaning "freshness" in Chinese) is composed of the radical "鱼" on the left and the radical "羊" (meaning "food" in Chinese) on the right, and it means that the newly-cooked fish and mutton are very fresh. As a result, the ancient people's initial understanding for freshness started with fish and goats.

Chinese people often use the phrase "鲜美可口" (literally meaning "fresh and tasteful to the mouth") to describe delicious food; therefore, the characters "鲜" and "美" were often used together by the ancient people.

The simplified Chinese character "羹" (meaning "the mutton blending with five flavors" in the ancient Chinese language, namely sour, sweet, bitter, spicy, and salty flavors) is composed of the radicals "羊" on the upper part and "美" on the lower part, which refers to strong soup with meat, vegetables or both combined together as raw ingredients. Therefore, modern soup is derived from the ancient mutton soup in its initial meaning.

The ancient Chinese people learned the essence of seasoning when cooking the mutton soup by blending the five flavors perfectly as one; therefore, the attributes of delicious food and soup originated from the goat.