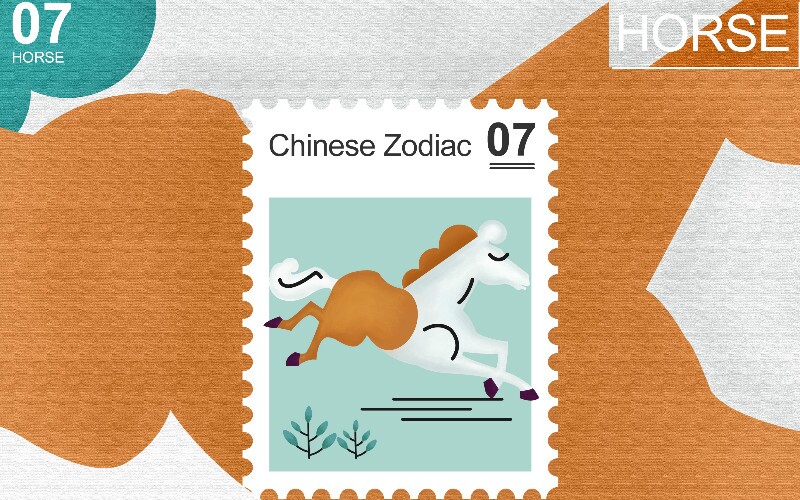 The Horse ranks the 7th position among the 12 traditional Chinese zodiac signs. The Horse usually ran and neighed wildly at noon before being tamed, therefore, it was also known as the "Noon Horse" in ancient times.

Symbolizing the Subjective Spirit of Men

It was believed by the ancient people that the Horse was an elf in the Yellow River and the incarnation of descendants of the Yellow Emperor, and it now symbolizes the subjective spirit and moral standards of the Chinese nation.

The Horse symbolizes Qian (referring to Yin, heaven or a male in the Eight Diagrams) in the worldview of the ancient Chinese people, and it means vigorous and prosperous.

The Book of Changes records: "Qian represents the Horse", therefore, the Horse not only represents heaven, a king, a father, and a well-educated man, but it also represents a man of honor in traditional Chinese culture.

The Most Faithful Partner of Mankind

The spirit of the Horse is faithfulness, speediness, nobleness, and the inability to be conquered. The charm of the Horse lies in its utterly devoted spirit, particularly as it shares all ups and downs with men, going through thick and thin together in danger.

Throughout the history of mankind, the Horse has run through the flames and smoke of ancient battlefields with its strength and faithfulness, and it now symbolizes the unyielding spirit of the Chinese people.

It's better to track the spirit of the Horse back through the history of mankind, which helps us to understand that the Horse is the most intimate and the most faithful partner of mankind. The Horse galloping across the battlefield symbolizes the hero who protects his home and defends his country, punishes evil-doers, and fights for justice.

The spirit and charm of the Horse are valuable spiritual benefits for posterity, which play a crucial part in the development of human psychology and even society, and the bold and unrestrained spirit of the Horse can still stimulate a man with great enthusiasm to overcome nature, his enemies, and even himself.

The Horse has become an assistant of humankind due to its tameness. It drew carts instead of men and people seldom rode horses before the Warring States Period (475 BC-221 BC). It was not until then that the ancient people living in the Central Plain of China started to learn riding skills from the Huns, and the Horse served for hunting and killing purposes in the battlefields.

It is in the battlefield that the Horse brings its talent into full play, because it's very competitive but faithful to its master.

The Horse also symbolizes competence, saints, and talent in traditional Chinese culture. The ancient people often compared talented people by calling them a "Thousand-Li Horse" (meaning a horse can travel 1,000 li per day).

The legend went that King Zhoumu had eight fine horses, each of which played an important part in the battlefield. As a result, the eight horses were compared by the later generation to the eight talents, who assisted the king in managing the whole kingdom.

Legend of the Horse and the Talents

The most famous legend about comparing horses to talents is "Purchasing Horse Bones with 1,000 Taels of Gold". The legend went that the kings vied with one another in recruiting the talents to enhance their kingdoms during the Warring States Period, particularly the King of Zhao (335–279 BC) of the State of Yan (11th century BC to 222 BC).

The King of Zhao planned to recruit talents with a modest attitude and favorable reward, and one of his officials, Guo Wei, told him a fable about the Thousand-Li Horse:

‘Once upon a time, there was an old king who wanted to buy a thousand-li horse with 1,000 taels of silver, and he was very unhappy because he still didn't have it after three years. An official volunteered his services to search for the horse, and his request was granted by the king. The official finally found a thousand-li horse after three months, however, it was dead.

The official took the bones of the horse for 500 taels of gold, and then went to see the king. The king was angry with him, saying: "What I want is a thousand-li horse alive, how dare you buy a pile of horse's bones with 500 taels of gold?"

After hearing the fable, the King of Zhao appointed Guo Wei as chancellor to take charge of recruiting talents with a favorable reward, and talents from near and far gathered together in the State of Yan, making it the strongest kingdom in the early Warring State Period.

The fable about the Horse and the talent is an excerpt from the Strategies of the Warring States, which fully demonstrates that the king sought for men of worth and ability with great eagerness.