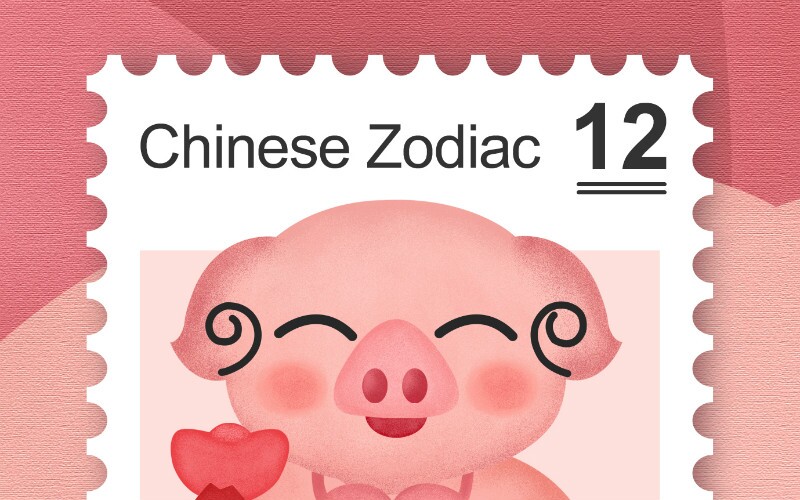 The Pig is the most docile of livestock in people's minds, having a round and fat face, and doing nothing other than eating and sleeping all day long.

Unlike the quick-witted Dog, the Pig doesn't understand what its owner wants, therefore, it has no need to follow or curry favor with its master.

Symbolic Meaning in a Derogatory Sense

The Pig is very famous for its laziness, and it grows fastest among all the livestock due to its lack of activity. The Pig barely takes any exercise despite continually eating, let alone worrying or being overworked.

The Pig is also known for its dirtiness, which is largely due to spending all of its life in a pigsty, so it's rather disgusting for men to see its living environment.

The Pig symbolizes foolishness, laziness, greed, and ugliness due to the above-mentioned characteristics, and its name is always used in a derogatory manner in traditional Chinese culture.

The Pig was also used in a disdainful sense, referring to the Chinese who were sold abroad as slaves and laborers during the late Ming Dynasty (1368 – 1644) and early Qing Dynasty (1644 – 1911), who were unlikely to return to China throughout their lives.

Symbolic Meaning in a Commendatory Sense

People use the symbolic cultural meanings of the Pig in a derogatory sense largely due to their prejudiced surface observations, but this is not always the case.

The cultural meaning of the Pig was not used in a derogatory sense at all in ancient times; instead, the Pig served as the gauge of bravery.

Not only did the ancient people raise pigs in their houses, but their social activities were also centered on the issues related to the pigs. For example, in terms of the font style, the ancient Chinese character (referring to the inscriptions on bones or tortoise shells) "事" depicts a man catching a pig with a long handle in his hand.

What's more, the quality of men was also measured by the pig (actually the wild boar) hunting activity in ancient times. For example, in terms of the font style, the ancient Chinese character "敢" depicts a man catching a pig with his bare hands. As a result, the Chinese character "敢" means bravery, and those who couldn't catch a pig were considered to be cowards in ancient times.

The Pig seems docile due to having lost its original nature after being isolated from nature and tamed for such a long time. On the contrary, the wild boar is very violent and well-versed at striking violently; therefore, the Pig symbolizes marching fearlessly onward in the ancient Chinese culture.

Due to the brave features of the Pig, the Japanese often give their children names containing the word "pig". They do so not because the pig is easily raised but because they appreciate the brave spirit of the pig.

Europeans have a similar cognition to the Japanese, and they consider that the wild boar is the fiercest and toughest animal among beasts, though it has no horns. The boar has sharp and hard buckteeth to stab its enemies easily, and it has armor-like skin due to continuously rubbing it on the tree trunks.

The pig pattern is extensively carved on badges in Europe, symbolizing bravery. For example, the badge of Richard III of England has the pattern of two pigs surrounding and protecting the shield. The badge of Campbell Clan in Scotland has the design of a pig's head which fully highlights the dignity of the pig.