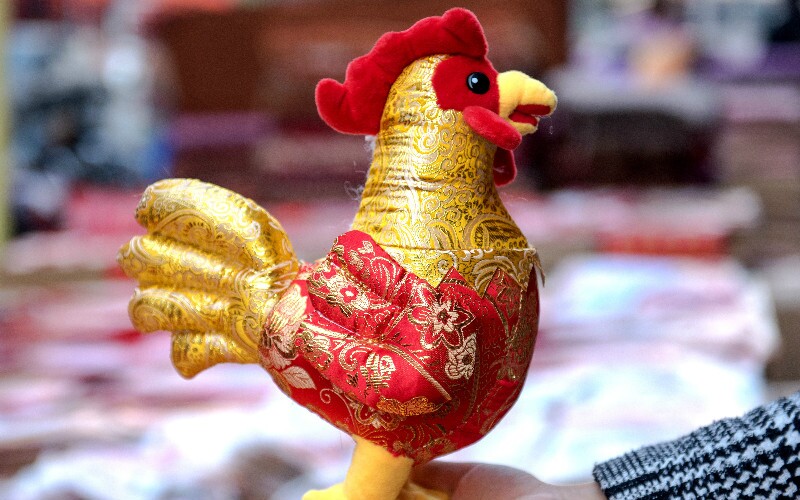 7 Things Roosters Symbolize in China - From Punctuality to Prosperity

Besides being the tenth sign of the Chinese zodiac (popular in the year of the Rooster 2017), the rooster is symbolic of seven things in China.

In traditional Chinese culture, the rooster's most obvious symbolic meaning was punctuality and honesty.

In ancient times, even though you could calculate the time roughly using some simple timers, there was no tool like an alarm clock to help you wake up in the morning.

People could hear roosters crowing every dawn. Thus the rooster's crow was taken as signaling the beginning of a new day.

The second thing roosters symbolize is bravery and competitiveness.

This originates with the gamecock. Fighting is in the rooster's blood. It's common to see two roosters fighting each other.

In order to set up the fierce fights, people feed their fighting roosters a special diet. Many people learn bravery and competitiveness from the roosters' heroic struggles.

The origin of this belief was very early. People living in the lower reaches of the Yangtze River paste a rooster picture to the door every Spring Festival. They believe this deters all ghosts from dropping in.

Older people teach children to imitate a rooster's crow. Then the children are instructed that if they ever encounter a ghost, they should crow like a rooster to scare the ghost away.

Fourthly, the rooster symbolizes the Sun God. Ancient Chinese people thought roosters represented the sun since they crowed every day when the sun rose.

So they believed that roosters had a kind of divine power. In ancient times many Chinese people would use the rooster and its blood to worship the gods and protect people against evil.

As early as the pre-Qin period (2100 BC – 221 BC), there were many ritual activities involving sacrifice of roosters to honor the gods. Nowadays, this custom is still prevalent in many regions of China.

The fifth thing roosters symbolize is luck. The word "rooster" (鸡, jī) in Chinese has pronunciation similar to that for "luck" (吉, jí).

It's believed that before it was domesticated by people, the rooster belonged to the same family as the phoenix.

Roosters are beautiful, with red comb, colorful feathers and golden tail. So at first people called them ji (吉, meaning luck) and believed this animal would bring people luck like the phoenix.

The rooster represents the ordinary in China. Roosters are the most common poultry and meat in China.

At the same time, Chinese people thought that though roosters really work hard to find food every day, they find just enough, with nothing to spare.

In Chinese culture, roosters suggest prosperity. They reproduce very fast. Chinese people understand this to represent prosperity in terms of both population and wealth.

In ancient China, there used to be a tradition that when a groom couldn't be present at his wedding, people would take a rooster to represent him, and place it alongside the bride while conducting the wedding ceremony.