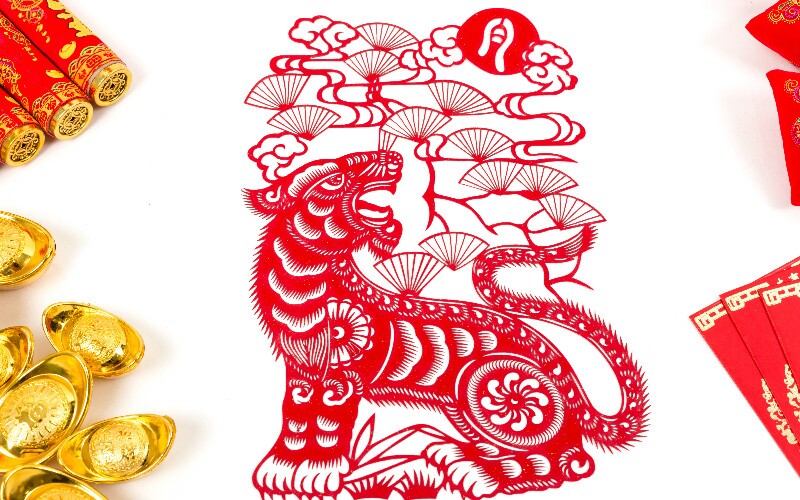 The Tiger is known as the king of all beasts, not only because the Chinese character "王" (literally meaning "the king") is displayed on its forehead, but also because it is the symbol of bravery and power.

Tigers originate from China and have had a close relationship with the Chinese people since ancient times; therefore, the ancient Chinese people greatly admired tigers, especially in areas such as South China and Northeast China where there were dense tiger populations.

Image of the Tiger in Chinese Culture

The Chinese people express their adoration, sentimental attachment, and wishes by using the image of the tiger, even placing their spiritual sustenance on the tiger. The tiger has become a very important theme in the 5,000-year history of Chinese culture and art.

According to traditional Chinese culture, the ever-victorious general, who rolls back the enemy in the battlefields, is called the Tiger General due to his martial bearing. The official, who is staunched with moral integrity in his temperament and never practices favoritism or commits malpractice, is called the Tiger Official. The kid, who studies hard with an ambitious goal, is called the Tiger Kid.

The Tiger and Chinese Art

The Tiger has a close relationship with traditional Chinese art. We can understand the evolution of the Chinese character "虎" from the ancient inscriptions on oracle bones. We can appreciate the charm of the Tiger artistically from the bronze wares of the Shang (16th century–11th century BC) and the Zhou dynasties (1100 – 221 BC).

We can feel the power of the Tiger from the tiger-head-shaped belt hooks and tiger-shaped tallies (the ancient emperors issued these to generals as imperial authorization for dispatching troops in ancient China) of the Spring and Autumn Period (770 – 476 BC) and the Warring States Period (475 – 221 BC). We can also admire the tiger patterns on the bricks and stones of the Han Dynasty (206 BC – 220 AD).

The seven–colored tiger painting, well preserved in the Mogao Grottoes in Dunhuang, Gansu Province, is a masterpiece of Chinese art.

The Tiger and Chinese Culture

The tiger is the most representative animal in nature, and it is admired as a god by the whole Chinese nation. Not only has the tiger become a symbol of bravery, happiness, and power, but it is also said to drive away evil spirits.

What's more, the totem of admiration and the legends about the tiger have become a link connecting nature, God and man perfectly as one, having a substantial influence on traditional Chinese culture.

The Tiger for the Yi Ethnic Minority People

Up until now, the Yi ethnic minority people still call both men and women "Luoluo", which they also call tigers, and they call the male tiger "Luopo" and the female tiger "Luomo".

The Tiger for the Bai Ethnic Minority People

The tiger is widely adored by the Bai ethnic minority people in Yunnan Province, for whom hunting tigers is strictly forbidden.

The Tiger for the Tujia Ethnic Minority People

The Tujia ethnic minority people, living in Hunan Province, west of Hubei Province and east of Sichuan Province, consider themselves to be the descendants of white tigers, and lots of intriguing legends of white tigers can be heard in their living areas.

The Tiger for the Hezhe Ethnic Minority People

For the Hezhe ethnic minority people in northeast China, the Tiger is called the God of the Mountain, and there are numerous temples with sacrifices regularly offered by the local people.

The villagers of the Nianduhu Village, Tongren County, Huangnan Prefecture, Qinghai Province, hold a ceremony to drive away evil spirits and diseases from the fifth to the 20th day of the 11th lunar month, during which time they dance the Tiger Dance to pray for peace and happiness from the Tiger.

The Tiger for the Taiwanese People

A memorial tablet for the Tiger is available in every temple of the Earth God in Taiwan, and the locals believe that it will bring good fortune and peace to those who offer sacrifices to it. The locals also carry the memorial tablet during parades through the streets when the large-scale ceremony is held annually to celebrate the birthday of Goddess Matsu of the Sea.

Chinese people have honored, praised, loved, and even feared the Tiger throughout the history of China, and the Tiger has become a unique cultural phenomenon in China, which will forever live in the spiritual life of the Chinese nation.