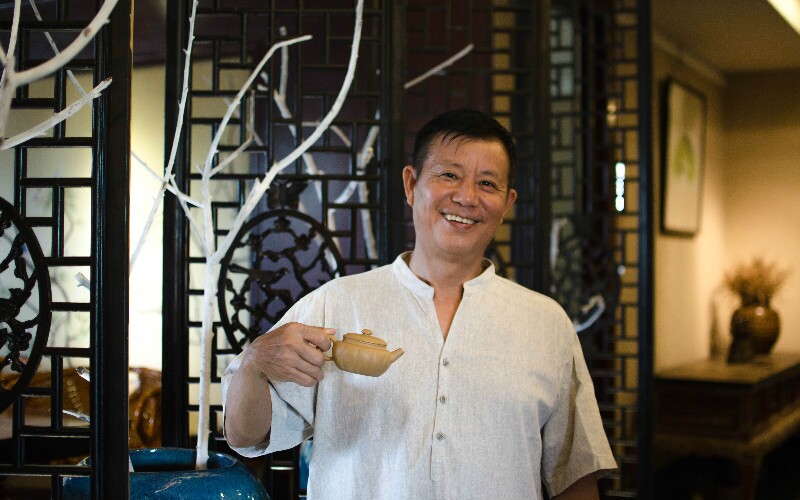 Tang suit often refer to a type of Chinese jackets. The word of Tang suit (Tangzhuang) was created by the overseas Chinese people.

As the most prosperous and powerful dynasty in the history of China's feudal society, the Tang Empire (618-907) was so famous in the world that foreigners call the overseas Chinese people 'the Tang people', the places where they live 'Chinatowns' (literally meaning Tang People Streets) and the clothes they wear 'Tangzhuang' (Tang suit).

A Tang suit (or Tangzhuang) has two varieties in Chinese culture, which are strikingly different from each other in style. One refers to the authentic Tang-era clothes evolving from Hanfu, and it features a button-less yi overlapping the right border to the left and is tied with a sash and an ankle-length shang, giving a free and easy and elegant impression.

The other refers to the Manchu male's jacket evolving from Magua of the Qing Dynasty (1644-1911), which is made by absorbing a Western-style suit cutting method, featuring a Mandarin collar, a frog (a knob made of intricately knotted strings) and a duijin (a kind of Chinese-style jacket with buttons down the front), and it's also nowadays known as Pseudo-Tangzhuang.

International Influence of the Tang Suit

The Tang suit has had a great influence on the clothing styles of Japan, North Korea, South Korea and Vietnam in history. The Japanese kimono is made on the basis of pao of the Tang Dynasty (618-907), and it has become the national clothing of Japan.

The Korean traditional dress also evolved from a combination of Hanfu of the Han Dynasty (206 BC-220) and pao of the Tang Dynasty (618-907).

The host, Jiang Zemin (the former Chairman of the PRC), presented silk-embroidered Tang suits to the heads of foreign countries at the Asia-Pacific Economic Cooperation summit in Shanghai in 2011, setting off a rush to wear Tang suits across the world.

As an integral part of traditional Chinese culture, Tang suits are worn by overseas Chinese people during the Spring Festival each year, attracting many foreigners to wear them out of curiosity.

If you have interest to learn more facts about Chinese traditional clothes, just contact us to tell your interests and requirements and China Highlights will create a China tour to you.