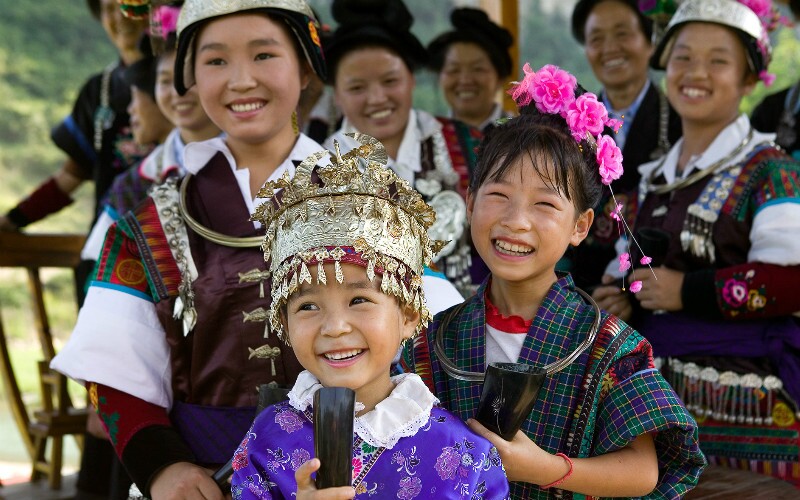 China is a multi-ethnic nation. Besides Han Chinese, who make up over 90% of China's population, there are officially 55 minority ethnic groups living in China. Their costumes, festivals, and customs can be unique and colorful and are some of China's unique attractions.

The 10 Most Popular Minorities with Tourists

Most of the 10 most popular minorities in China live in unusually beautiful countryside or natural areas. Tourists like to see that as well as enjoy their distinctive cuisines and entertainment. Some such as the Tibetans, Manchus, and Uyghurs have notable ancient architecture, while others such as the Zhuang and Yao are noted for their beautiful terraced fields.

The Zhuang ethnic group is the largest of the 55 minorities in China. About 18 million live in the south and southeast. Their main homeland is in the Guangxi Zhuang Autonomous Region and Yunnan Province. Others live in Hunan, Guizhou and Sichuan provinces.

2. Mongolians - The Most Famous Ethnic Minority

The Mongolian ethnic group is best known for conquering most of Eurasia and establishing a large empire almost 1,000 years ago. The Mongolian Yuan Empire lasted about 100 years until 1368. Now, 6 million remain in China in Inner Mongolia, Jilin, Heilongjiang, Liaoning, Xinjiang, Hebei, and Qinghai Provinces.

Ethnic traits: They love hearty meat dishes, wrestling and horseback riding. Their annual Naadam summer sporting events are popular highlights you can visit with us.

3. The Hui - Chinese Muslims, the Most Widespread Minority

Lanzhou Hand Pulled Noodles Soup with beef is served in Hui restaurants all over China.

The Hui ethnic group is China's most widely distributed ethnic minority who are distinguished mainly by being ethnically Muslim. There is a sizeable population of 11 million. They live in the Ningxia Hui Autonomous Region in northwestern China and in many cities and villages in the provinces of Gansu, Xinjiang, Qinghai, Hebei, Henan, Sichuan, Yunnan and Shandong.

Ethnic traits: Though they are culturally like the Han, they are distinguished by being converts to Islam or being descendants of Muslims. They don’t have a language of their own, and most keep almost no Muslim customs. They are unlike the Uyghurs who retain their own language and culture. Hui are known across China for their popular Lanzhou noodle restaurants.

A Miao girl dressed in their silver clothing and jewelry.

The Miao ethnic group consists of about 10 million people in China, and their traditional homeland is around the area of Guizhou where 4 million now live. But they were scattered widespread by persecution .

Ethnic traits: The Miao are quite interesting to visit. They prefer silver, and the women clothe themselves in silver suits and jewelry, and these make good souvenirs. They were fiercely independent, and love music. They have a distinctive style of music and architectural style that tourists can appreciate.

The Dong live mainly in the provinces of Guizhou, Hunan, and Guangxi. Their villages are often located near Miao villages in Guizhou, and there are about 3 million of them in China. Their language is related to Thai.

Like the Miao, the Dong are known for fine Lusheng music. They are famed for distinctive polyphonal musical concerts, and their architecture and craftsmanship as exemplified in Chengyang Bridge in the Sanjiang Village area is distinctive and appreciated by tourists.

The Uyghurs are a distinctive minority whose homeland is Xinjiang. About 11 million live there and in other parts of China, especially in Hunan and Henan.

Their language is related to Turkish. Around China, they are known for their "Lanzhou noodle" restaurants and delicious Xinjiang-style food. They have a long and colorful history on the Silk Road. Turpan, for example, is an excellent place to see their ancient culture and architecture such as the Jaiohe Ruins.

7. Manchu - The Creators of the Qing Empire

The Forbidden City is where you can see how the Manchu dynastic clan lived together.

The Manchu ethnic group in China are the descendants of the Manchus and Mongolians who invaded the Ming Empire and created the Qing Empire (1664–1912). Now about 11 million live in China. They now live mainly in their ancestral territories in the provinces of Liaoning, Heilongjiang, and Jilin.

After the founding of the Qing Empire, the Manchus were assimilated with the majority Han. Now, only a small percentage speak the traditional language. You can learn about their history and empire at the Palace Museum.

8. Tibetans - Descendants of a Powerful Empire

The Tibetans once ruled the mountains of southwest China, and they had a vast empire from the 7th to the 9th centuries. Now, about 6 million live in China, and 3 million of them live in Tibet that was their former stronghold.

9. Yao - Famed for Their Rice Terraces

The Yao ethnic group has a population of over 2.6 million. They live mainly in Guangxi, Hunan, Yunnan, Guangdong, Guizhou and Jiangxi Provinces together with the Zhuang.

Ethnic traits: Most of the Yao people are farmers who live in small villages and towns that are distributed widely in mountainous areas. To see them at work and visit their villages, you can take a trip to Guilin to the Dazhai Village area to the see their beautiful Jinkeng Terraced Fields.

10. Naxi - Noted for the Unique Culture and Waterworks

The Naxi are a comparatively small group of people who mainly live in Yunnan Province. The city of Lijiang is where most of their 330,000 population live. The government designates the distinctive Mosuo people of the Lugu Lake area outside of Lijiang as Naxi as well. About 50,000 Mosuo live there.

Ethnic traits: The two groups are quite different. The Mosuo are noted for a heavily matriarchal social system. The Naxi are more cosmopolitan. They have their own distinctive writing system and literature. They were historically traders who built intricate waterworks for their towns exemplified in the Ancient Town of Lijiang.

Some Other Ethnic Groups in China

We also have information about these 10 interesting ethnic groups in China:

Your whole family can have a fascinating and memorable visit in an ethnic village.

If you want to explore China's ethnic villages. See our China's Festival Tours and our China Minority Tours of southwestern China and Tibet, or simply contact us for a tailor-made tour.