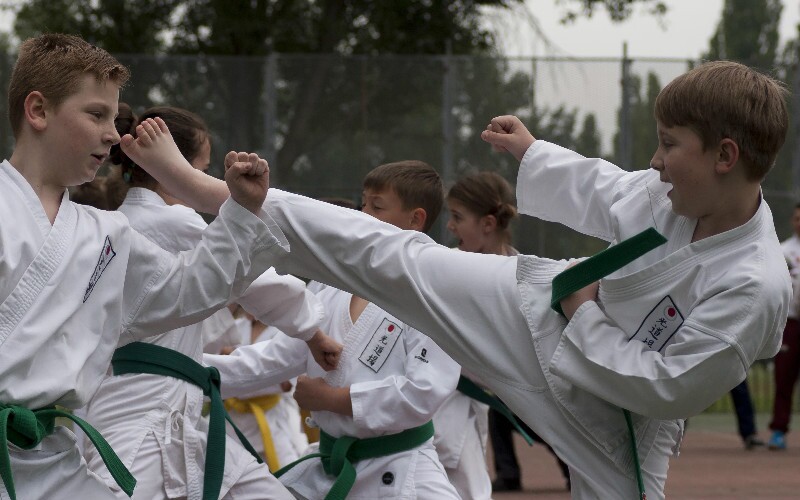 Chinese kung fu, also known as wushu or Chinese martial arts, is an important part of traditional Chinese culture. It is probably one of the earliest and longest lasting sports, which utilizes both brawn and brain. Different from self-defense and boxing, kung fu is more holistic, developing internal discipline with external technique.

The theory of kung fu is based upon classical Chinese philosophy. Over its long history it has developed as a unique combination of exercise, practical self-defense, self-discipline, and art.

It is estimated that Chinese Kung Fu can be dated back to primeval society. At that time people used cudgels to fight against wild beasts. Gradually they accumulated experience in self defense. When the Shang Dynasty (1600–1046 BC) began, hunting was considered as an important measure of kung fu training... More on kung fu history.

The Theory of Kung Fu

Chinese kung fu is a large system of theory and practice. It combines techniques of self-defense and health-keeping.

In sports like track and field, ball sports, weightlifting, and boxing, an athlete typically has to retire from full participation in his 30s. Injuries sustained during years of active sport participation at a young age can affect our ability to continue exercising in later life.

You too can practice tai chi in China!

Taijiquan (/tie-jee-chwen/), i.e. tai chi, is a Taoist internal martial art. One account of the history of taijiquan credits its development to the Taoist immortal Chang San-feng, who is said to have drawn the inspiration for the art by watching a fight between an snake and an aggressive eagle. More on taijiquan

"Qi gong" (literally 'breath exercise') is an invaluable component of traditional Chinese medicine that has its origin in ancient times. Its primary stimulus was the search for longevity, with the ultimate aim of immortality, which has so enchanted the Chinese mind for centuries. More on qi gong.

Because of kung fu TV series in the 1970s and movies about Shaolin Kung Fu, this Buddhist temple in Henan Province became known around the world. The temple has a long history. It was destroyed or closed and reopened and rebuilt over and over. Read more on Shaolin Temple

Zhonghua Martial Arts School of Shandong Laizhou is located in the beautiful Jiaodong Peninsula, in East China's Shandong Province. The famous Mantis and Wu styles of taijiquan originated there.

The school is a large international civil and military school with world-class facilities and excellent coaches, and one of China's top ten martial arts school.

Songjiang Martial Arts School of Shandong Yuncheng was founded in 1985. The school has over 3,600 students from China, America, Australia, and South Korea. From primary school to high school there are 50 arts classes and 60 martial classes.

The school is also a domestic and international film shooting base.

Zhao Changjun Martial Arts School of Xi'an is a full-time (boarding) martial arts school, providing both martial arts training and normal education. The school has a number of martial arts and education experts.

Zhao Changjun Martial Arts School of American was set up in New Jersey. The school has established friendly relations with more than ten well-known foreign colleges, and attracted more than 20 friendly groups from countries like Britain, Canada, Germany, and France to visit in the past.

Dongling Shaolin Martial Arts School of Shenyang was founded in December 1, 1990. In the first 15 years 4,500 students graduated there. It has 600 students and 62 martial arts coaches.

Dongling Shaolin Martial Arts School of Shenyang is also the training base for sports colleges in Beijing, Shenyang, Wuhan, Chengdu, Guangzhou, Shanghai and other cities. It has fostered more than 400 undergraduates, including some professional athletes. It combines normal eduction with kung fu training, with typically half a day spent on each.

"The Legend of Kung Fu" Show in the Red Theater, Beijing.

The Legend of Kung Fu

The show "The Legend of Kung Fu" tells the story of a young boy who dreamed of becoming a kung fu master, and how he overcame difficulties and temptations on the road to enlightenment.

The actors are excellent kung fu artists found from all over China. The actors do not speak, and the narration is shown above the stage with English subtitles.

This spectacular show is a combination of kung fu, acrobatics, and dancing, and is produced to international standards by China's leading performing arts production company. It is a show not to be missed for kung fu fans, or families with kids.

10 Movies to Watch Before Going to China

The History of China: Dynasty/Era Summary, Timeline
We are here to help you...
start planning your tailor-made China tour with 1-1 help from our travel advisors. Create Your Trip