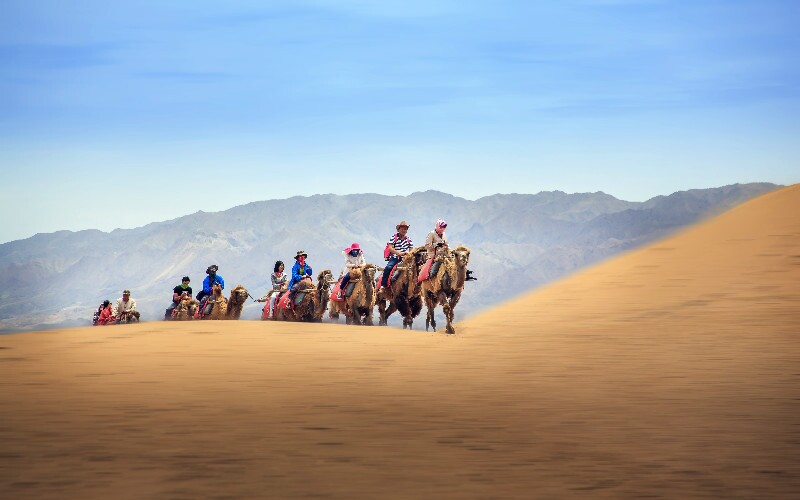 Xinjiang Silk Road Museum (新疆丝绸之路博物馆) is a large museum with emphasis on Chinese civilization on the Silk Road and local ethnic cultures.

It is easy to find since it is located right next to the Grand Bazaar at No. 160 Shengli Road. The Grand Bazaar is also called Erdaoqiao in Chinese. It is on the fifth and sixth floors of a very large European-style building that also houses a shopping complex.

Most of the exhibits have English signs. The emphasis is mainly on the history of ancient Han (202 BC-220 AD) and Tang (618-907) Dynasty civilization along the Silk Road in Xinjiang and on the present cultures of the various ethnic groups in Xinjiang. In the Silk Road Museum, visitors can gain an appreciation of the civilizations of the ancient desert region, understand the influence of China in the area, and get acquainted with the customs of the people presently living in the region.

The museum includes a historical section, a nationality section, a pastoral arts section, a jade section and other halls. One of the museum’s aims is to instruct on the ethnic groups along the ancient Silk Road and the precious cultural heritage created by these people in Xinjiang. If you visit the museum, you can see pieces of art and artifacts from the Khitan Kingdom, the Han Dynasty and Tang Dynasty, some silk art and even some rock art.

The Silk Road, the northern trade route between East and West, played a role in the development of the civilizations of Eurasia. The Xinjiang Silk Road Museum instructs on the history of the Silk Road. Traffic from the west passed through the Gansu Corridor to the heart of inland China from about 200 BC to the fall of the Yuan Dynasty (1279-1368 A.D). The Yuan Dynasty was the Mongolian Dynasty of China. The Mongolians conquered China and many other countries and made a big Eurasian empire from Korea to Hungary. It was the biggest Empire in the world until the British Empire. But when their empire collapsed, regional conflicts interrupted trade. After the 1500s, merchant ships made the northern Silk Road routes mostly unnecessary for long-distance trade.

The Grand Bazaar (also called Erdaoqiao in Chinese) is a place to get and look at regional products, and there are also imported products from nearby Russia and Mongolia and the new states to the west. It is a popular tourist destination and somewhat of a tourist trap. It is in the city’s Uighur district. That makes the place interesting. Try Uighur fruitcakes and dried fruits.

Nearby in Urumqi, there are two other historical and cultural museums and a geological museum. If you are interested in learning about Xinjiang and its ancient history, one of the highlights is the Xinjiang Uygur Autonomous Region Museum. It is famous for having the artifacts and mummies of Caucasians who lived in the region between 1,500 and 4,000 years ago. A whole culture and perhaps an entire civilization have been discovered in Xinjiang in the past twenty years. It wasn’t known that the Caucasian settlements existed, and historians have had to rewrite the history of Eurasia because the artifacts and clothing are more technologically sophisticated than was thought possible for the Bronze-age in Asia. There is also a collection of silk artifacts from many periods of history and a collection of writing samples of many peoples and eras. But what most tourists want to see are the mummies and their artifacts.

The other historical and cultural museum is called the Urumqi Museum. It is located at South Nanhu Road 123 (南湖南路 123). The Xinjiang Geological and Mineral Museum is located on Youhao Road, and it is one of China’s largest geological museums. If you are interested in rocks, fossils, minerals and crystals or in understanding the geology and natural resources of Xinjiang, that is the place to go. It has four exhibition halls. One deals with the minerals of Xinjiang where you can see beautiful crystals and minerals, one deals with geological science, and one deals with how minerals are used.

If you want to go on short excursions in the area of Urumqi to understand the ancient history of the desert region, the mainly Uighur city of Turpan is only about three hours away and around it are several major ancient sites including those that relate to the Tocharians. To experience the various ethnic cultures, you can go to the South Pasture area on Nan Shan to see Kazakh shepherds with herds and the Kazakh tourist industry or go to Turpan to see Uighurs and the karez underground irrigation tunnels that they maintain to make Turpan a rich agricultural region.

Travel Urumqi with Us

See our Urumqi tours below for inspiration. Our tours can be customized.

Or you can just tell us your interests and requirements, we will help you create your own tour.