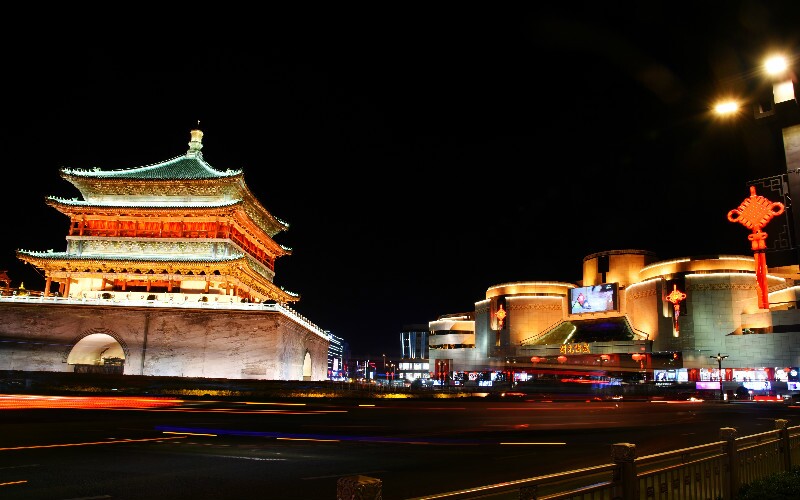 The Most Popular Night Markets in Xi'an

In their vibrancy and in their variety, night markets are popular with locals and visitors both for an evening meal and for socializing. There's much to be learned about a city, and about China in general, from an evening spent selecting different dishes and snacks from a wide range of tempting and intriguing options.

With different kinds of food from different localities, you can take a journey around Chinese cuisine by walking a few dozen meters down one of these streets. Here are the most popular night markets in Xi'an.

Located downtown in an area that plays host to a large population of China's indigenous Muslim Hui people, this market specializes in halal foods. Not only the food, but also the architecture and activities of the area and the dress of its inhabitants pay tribute to their Islamic origins, making a visit to this particular night market a cultural feast. With many of the emporia here open 24/7, Barley Street Market is immensely popular.

Hui food tends to be strongly flavored compared with traditional Chinese dishes, and meat is to the fore. Amongst the specialties are Laoma-cured and Laotong-cured mutton and beef, marinated bean jelly, tamale and clysters buns, fried peanuts, fried melon, and ox-marrow stir-fried noodles.

Particularly famed for its Zenggao snacks, many people come to North Guangji Street specifically to visit Laoma Zenggao King emporium. However, there are other emporia here dedicated to a wide range of Hui cuisine. Wander around and select from such dishes as Liu roast chicken, five-styles cured beef-mutton, meaty steamed buns and tamale.

Unlike Barley Street Market, North Guangji Street is not open 24/7, but open from dusk to dawn it's the perfect place for night owls.

Brightly lit and vibrant, North Gate night market is situated in downtown Xi'an, close to Bell-Drum Tower Square. Not exclusive to one particular style or region, this is the place to explore a variety of different cuisines. Particularly recommended are the barbecues, spicy hot pot, many varieties of steamed buns and traditional Chinese cakes. The lamb basin is another dish to be found here which is worth seeking out

This is another dusk to dawn night market for those who want a long and lively night out.

In Dapiyuan, Hui cuisine vies with traditional Xi'an food for your attention and delectation. Laoqi-style barbecue, steamed buns in many varieties, tamale, enticing lamb and beef dishes all ensure that you're in for a good night out and will leave with an overfilled stomach.

Dapiyuan is another dusk-to-dawn venue.

Catering to a wide variety of tastes, the Eastern Street Night Market is large, with over 50 outlets. The particular specialty of Eastern Street is Shangxi-style food. Look out too for a wide variety of snacks, casserole dishes, vermicelli, dumplings, grilled fish, steamed shrimp, tripe and other forms and styles. If you want more familiar items, the usual barbecues, steamed buns and noodle dishes are also available.

Opening hours are relatively short; so don't put it off until too late to get there. The outlets are open from 6:00pm to midnight.

One of the largest of the night markets in Xi'an, Nanshaomen is a particularly lively, bright and crowded destination given its popularity. Less focused on any particular style, this night market is one of the better places to sample food from all around China. To list the dishes available would be pointless. Rest assured, if there's something you want you may well find it here and, if you don't, you're very likely to find something even better.

As with Eastern Street, opening times are relatively limited. Aim to get there between 6.00pm and midnight.

Another night market with its eye to a wide variety of dishes from around the Chinese nation, the Yaxin food stalls are particularly highly recommended, as is Wangji barbecue, casseroles and grilled fish dishes, all reasonably priced.

Once more, open from 6.00 until midnight, don't leave this one too late.

Expect a big student turnout here from 6.00pm until midnight when the Ercun night market closes, given that it's handily located for the Xi'an Jiaotong University. A youthful place to have dinner and, reflecting the wide variety of locales from which the students come, it has a wide variety of food from all around China so everyone gets a chance for a taste of home while you're given the chance for culinary exploration without leaving the area.

Before you head out, prepare yourself for the night markets by studying up on Xi'an's popular fare in advance. Heading to a night market with a broader range? Check out our article on China's Top Food Cities and see what else you can find from other parts of the country. Spice up the evening still more by checking out some of Xi'an's nightlife before or after you settle down for your meal.

How about letting us arrange your evening out?

Our Xi'an tours are fully customizable. If you'd like a Xi'an night out to remember with your own guide and private transport, just let us know and we'll make it a part of your own personalized tour.

Here are our most popular Xi'an tour for your inspiration: