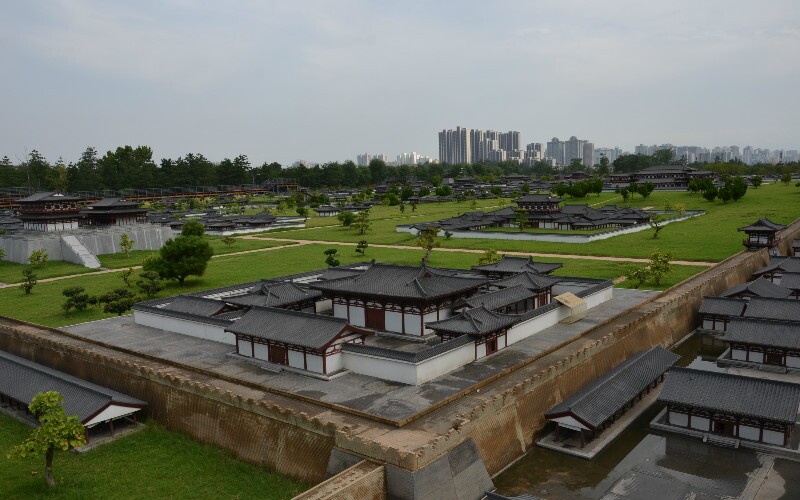 The Daming Palace (大明宫) area was first built by Emperor Taizong (599-649) of the Tang Dynasty. It was built in the northeast corner of Changan that was the Tang capital city. At its height, Changan was a very big walled city. People say it measured 8 kilometers by 9.5 kilometers or about 5 miles by 6 miles. The city was rectangular, but on the northern face of the city near the northeastern corner, the Daming Palace area that contained a park and recreation area and a palace area jutted out from the walls.It too was walled and had gates leading back into the city, and in its northern area there was a small pond and stream. This addition to the city stretched about 2 kilometers or 1.3 miles north and was about 1.5 kilometers or .9 miles wide at the widest part. The area was destroyed, and currently there is a section with archeological discoveries, and the rest is a park.

In 2007, the government and the municipal committee of Xi'an launched a project to turn the historical Daming area into the Daming Palace National Heritage Park to preserve the area and allow people to enjoy the area that was once the royal grounds of the Tang Dynasty. The park opened in October of 2010. The natural pond at the site called Taiye Pond is a prominent recreational feature that has walking paths, bridges, and flocks of birds that people can enjoy. Certain key buildings were planned to be constructed to recreate the grand ambiance of the Tang era. A wide plaza was planned with special effects and lighting so that the park can be enjoyed both day and night. There is a sports field, and archeological discoveries are exhibited in a portion of the park.

The Daming Palace Site National Heritage Park is currently under construction. But most of the park is free. The natural pond site can be visited, and people can enjoy the park. A section of the park displays some old ruins and archeological discoveries. There is a fee for this area. There is also an auditorium and eating places. A large ancient-looking building has been built.

There is a lot with miniature models of ancient architecture. There are a lot of models of traditional-looking buildings that are about a meter or a yard tall that people can walk around and look at.

In 662, another emperor named Gaozong added a lot of gardens and constructed a lot of buildings, and the Daming Palace area became his clan's dwelling quarters. He fortified the area extensively. The area was destroyed in war in the year 896.

At one time, the Daming Palace area had several palaces and temples. The biggest palace was called Huayuan. Other palaces were used to meet officials or foreign ambassadors. There were gates leading both into the main city and out to other sides. There was also a big pond called Taiye pond and a garden that people enjoyed. There was an archery hall, a bathhouse, storehouses, a drum tower, a bell tower, a Cuju (the ancient football) sports filed, and a separate entertainment ward.

Fee: a part of the park has archeological discoveries and old ruins, and the fee for this part is about 60 RMB. The rest of the theme park is free. China Highlights can help you design a trip to this and other places.