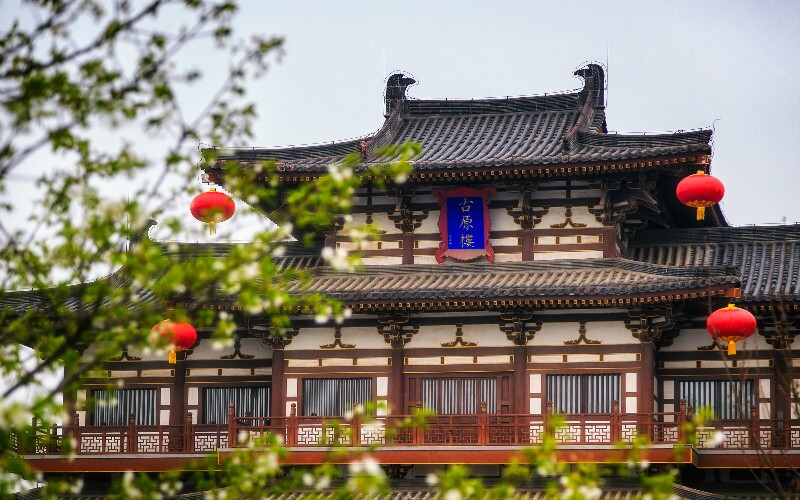 The Qinglong Si (Green Dragon Temple) was a famous temple of the Tang Dynasty (618-907). It was known as a place where Buddhist monks were trained, and it was a favorite destination in China for Japanese monks to learn Buddhism. The temple's history is well known in Japan because a Japanese monk named Kukai studied there and brought back his Buddhist teachings to Japan in the year 806. His influence was part of what made Buddhism popular in Japan. The original temple was destroyed, but a new one was built in 1963. The temple and the surrounding garden and halls are a favorite attraction for Japanese tourists who much appreciate the cherry trees that bloom between about March to May depending on the year's climate. So if you go there when the cherry blossoms are blooming, you'll likely see Japanese tourists. Beside the Green Dragon Temple, you can see a recently-built monument to the Japanese monk Kukai, exhibition halls, some remaining Tang-era monuments, and beautiful cherry trees.

The temple has three sections. The first section has a pond and a garden with plum trees and cherry trees. The eastern section has a memorial to Kukai that was built in 1982 to commemorate the 1178th anniversary of Kukai's arrival in China. To the west of the garden is another section that contains a replica of the temple's main hall. The construction of the main hall began in 1984 as a collaboration between Japan's Shingon Sect and the city of Xian. The Shingon religion that was started by Kukai is still a major religion in Japan. The builders tried to recreate the look of the original Tang-era hall as determined by archeologists.

During the Tang Dynasty era, Xi'an was the capital of the Tang Empire, and Buddhism that was taught by Western Asian travelling monks was reestablished in the empire to be a major religion. The Western Asian monks taught a kind of Mayahana Buddhism that had developed there during the centuries before north of India. They travelled along the Silk Road eastward, and settled and taught in Xi'an. Many temples were built, and at the time, the Qinglong Temple was considered relatively small and unimportant, and it is said that the monks had little influence on Buddhism in the Tang Empire or afterwards.

But the monastery had a big impact on Japanese religion. A monk named Kukai (774-835) travelled around to look for a teacher who was willing to teach him some of the teachings of the Central Asian monks. He found a monk named Huiguo at the Qinglong Si who had studied under a famous travelling monk named Amoghavajra (705-774) who had been influential. At the temple, Kukai and other Japanese monks studied the scriptures and the system of rituals. Kukai returned to Japan in 806, and was very influential there. In 824, he was appointed to be the chief architect of the imperial Buddhist temple at Toji in the new capital city that the emperors were building. After that, he became tutor to the crown prince. His "Shingon" teachings became very popular and had the support of the emperors of the time.

Nearby Attractions: The Green Dragon Temple is surrounded by several of Xi'an's major attractions that are all within about a three kilometer distance away. Only about 3 kilometers or 1.5 miles directly north of Green Dragon Temple are two of Xi'an's other attractions: the Drum Tower and the Bell Tower. These two sites can easily be reached by walking north on Nan Da Jie (South Big Street). The Xi'an Beilin Museum is about 3 kilometers to the northeast. The Big Wild Goose Pagoda is about 3 kilometers to the southeast. And the big and informative Shaanxi History Museum is about 2 kilometers or a mile south.China Highlights can help you design a trip to visit this and other sights in Xi'an.

The restaurant is located near Qinglong Temple. Jiaozi or dumplings with meat and vegetable fillings are very popular during New Year Festival. It tops the list of delicacies preferred by people in Northern China. Our teacher will share some basic skills of dumpling making and then enjoy the fruits of your labor. What happens during the class? 1. Full illustration of dumplings making by your tour guide. 2. Demonstration by the chef. 3. Learn to make different types of dumplings. 4. Taste dumplings prepared for you.