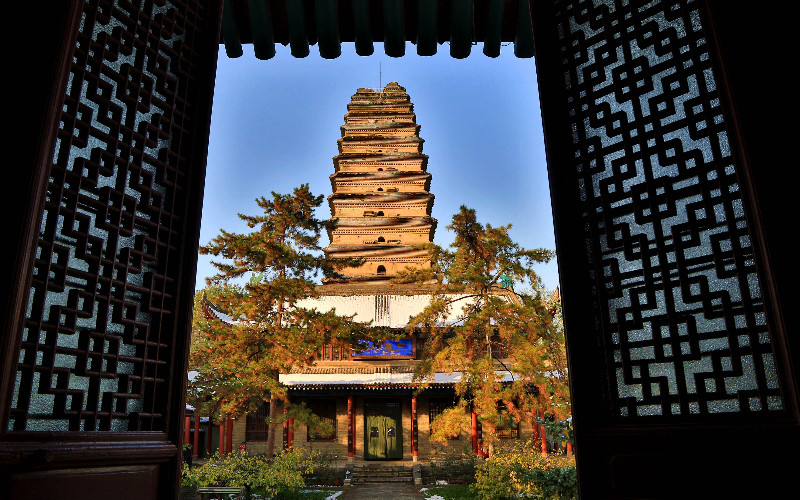 The two pagodas were a symbol of Chang'an (Constant Peace) city. Xi'an (West Peace) was called Chang'an until the Ming Dynasty (1368-1644), when Beijing became the capital of China. Chang'an had served as the capital for ten dynasties. Jianfu Temple was first built in 684 AD in honor of the second emperor of the Tang Dynasty, Emperor Lizhi (named Gaozong on his accession), on the hundreth day after his death. It was then named Xianfu (Dedicate Blessing) Temple, but renamed Jianfu Temple by Empress Wu Zetian. She won Lizhi's favor as a concubine and siezed power after his death. Her ruthless reign interrupted the Tang Dynasty for a period of 15 years. The famous pilgrim Yijing, a great Buddhism translator at that time, once lived in Jianfu Temple to translate Buddhist scriptures that he brought back from India.

Small Wild Goose Pagoda was erected in the period 707 to 709 AD. It was named after its larger predecessor, Big Wild Goose Pagoda, five kilometers away. The building was originally a multi-eave, square-brick 45 meter-tall structure, with 15 storeys. A big earthquake in 1556 reduced it to the present 13 storeys. A crack opened from the top to the base and the upper two tiers toppled off.

Though the crack was later repaired, the top two storeys were never replaced. The 13-storey structure later suffered countless other earthquakes, yet it is still remarkably well-preserved. Inside the pagoda, there is a staircase that allows visitors access to the top. Small Wild Goose Pagoda is part of Xi’an Museum. The museum exhibits about 130,000 pieces of precious relics introducing the splendid history and culture of Xi’an and China as well, including jade articles, seals, Buddhist statues, stone carvings, porcelains, calligraphies and paintings. There is also a small exhibition hall beside the museum displaying some Huxian County farmers’ paintings (famous for portraying the ordinary aspects of country life on blackboards and newspapers and in large murals) and collections gathered from among the folks.