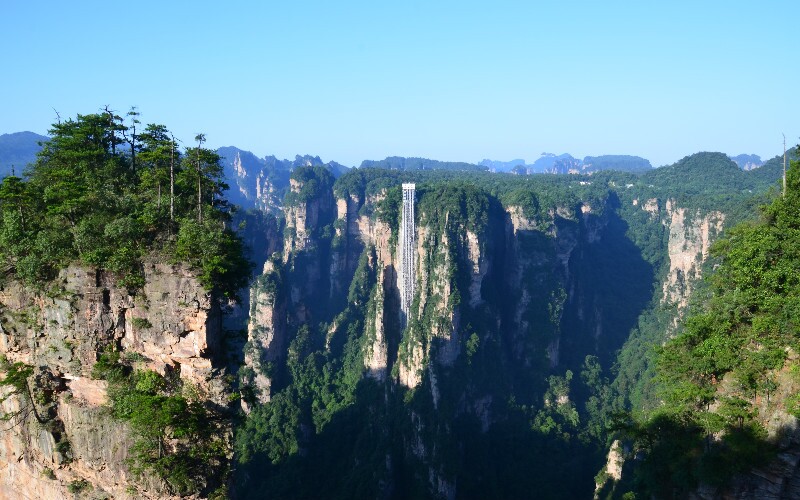 Zhangjiajie's Bailong Elevator: Do You Dare Ride It?

Bailong Elevator is the highest and fastest outdoor elevator in the world with 3 cars clinging onto a mountainside in Zhangjiajie.

It sits inside Zhangjiajie National Forest Park in Wulingyuan Scenic Area in China's Hunan Province, and rides up 326 meters (or 1,070 feet) high in under 2 minutes. It's definitely a tough one for those with a fear of heights!

One of its Chinese names (百龙天梯) means 'hundred dragons sky ladder', because (with imagination) it looks like a giant dragon soaring up to the sky. Its official name is 百龙旅游电梯 'Hundred Dragon Tourism Elevator'.

Zhangjiajie's star attraction, Halleluyah Peak, is made easier to get to by nearby Bailong Elevator.

The elevator was built between 1999 and 2002 but wasn't recognized as the fastest and tallest outdoor elevator by Guinness World Records until 2015.

2015 also saw a speed upgrade on the elevator, decreasing the ride from 2 minutes to just 1 minute and 32 seconds, that's about  3 meters up per second!

It took an investment of approximately 20 million USD to build, after a carefully selected quartz sandstone cliff face was chosen to build tunnels and shafts into.

The 3 cars can accommodate 4,900 kilograms (or 10,803 pounds), to fit about 50 people in each car. This also makes it the passenger elevator with the biggest carrying capacity in the entire world.

And some Bailong Elevator controversy...

Between 2002 and 2003, the Bailong Elevator was actually shut temporarily as a result of safety concerns. Because Zhangjiajie National Forest Park is located in an earthquake-prone area, although there have been no significant earthquakes in the province in recent history, the elevator was fitted with detectors to allow quick evacuation just in case.

It also sparked a lot of debate about whether or not the construction would be an eyesore and would put pressure on the natural environment of the national park.

However, many say that the elevator has reduced damage to mountain trails and that visitors are able to visit and leave the park again faster, as they can take a quick elevator ride up instead of riding a bus/cablecar up to Tianzi Mountain and walking a longer circuit or hiking for hours up to Halleluyah Mountain.

Ride the elevator for a view of Avatar Hallelujah Mountain

Hallelujah Mountain, named after the floating outcrops of Pandora, as its middle is often lost in cloud.

From the plateau accessed by the elevator, you can soon get an amazing view over one of Zhangjiajie National Forest Park's most famous sights: Hallelujah Mountain.

Hallelujah Mountain, specifically, was film director James Cameron's inspiration for Pandora's floating mountains, at the time when artists were putting together the magical land as seen in the film.

As a result, Hallelujah Mountain is now the most popular spot in Zhangjiajie National Forest Park.

This mesa or slender stand-alone peak was initially actually called 'Southern Sky Column' or 'Southern Pillar of Heaven' (translations here differ), but it changed its name after the movie was released in order to reflect the impact it had on the film's landscapes.

When to Visit Zhangjiajie and Bailong Elevator

While Zhangjiajie is picturesque any time of year, we recommend visiting Zhangjiajie between April and October because winters are cold and the tourist areas are less accessible during this time.

Bailong Elevator is extremely popular, and as a result, the lines can get up to 2 hours long. This is especially the case during the most popular Chinese holidays and weekends. Avoid these if you can.

How to Get to Bailong Elevator

You can get to Bailong Elevator on two of the bus routes from Zhangjiajie National Forest Park's entrance and sights inside the park:

1. the 'Mountain Down Bus' to the elevator foot

These buses are all free to visitors with a valid national park ticket.

Option 3. Tianzi Mountain Cableway: You could also take the cableway from Suoxiyu up Tianzi Mountain, followed by an hour's walk to the elevator top.

Attractions in Zhangjiajie, including Bailong Elevator, are well spaced out. That's why we recommend planning your time in Zhangjiajie well.

We've also got plenty of Zhangjiajie accommodation recommendations to suit your itinerary.

The 3 Glass Wonders of Zhangjiajie: Plenty to do for daredevils!

Zhangjiajie is absolutely a once-in-a-lifetime destination! Apart from Bailong Elevator, the great glass elevator, it is also home to:

Tour Zhangjiajie with Us

We've got plenty of Zhangjiajie tours depending on how much time you have and how active you want to be.

We can take you around for four full days to explore everything these gorgeous mountains have to offer, or take you on a one-day tour of the glass bridge and Baofeng lake.

And of course, tours can be tailored to your needs. Please contact us here if you've got any special requests or requirements.