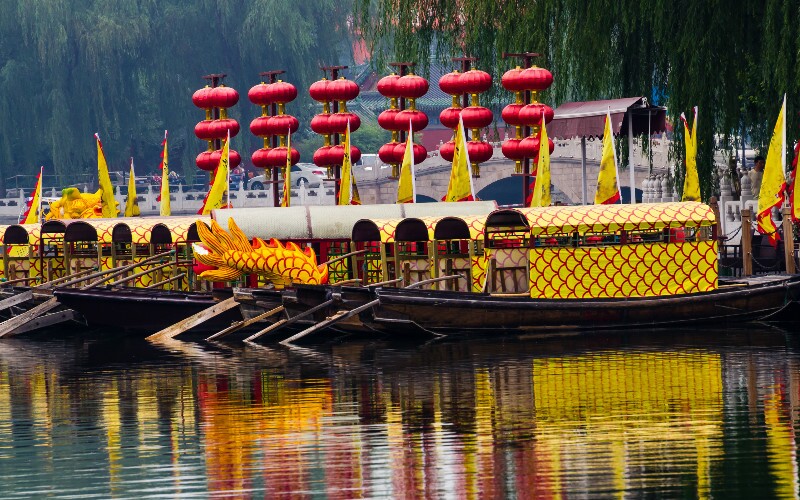 Houhai - a Nice Place for Relaxation Houhai has been a bustling commercial district since the Yuan Dynasty (1271-1368). Nowadays, Houhai is a place for Beijingers to relax and is known for its nightlife. Restaurants, bars, and cafés are dotted in the lakeside hutongs. The area is especially popular with foreign tourists and younger generations of locals.

What to Do in Houhai

There is a lake surrounded by willows. The scent of traditional Beijing snacks floats from the ancient lanes from time to time. People go there to see the willows, look for the epitome of the old Beijing courtyards and lanes, and to relax in a bar. There are many interesting things to do in Houhai. Houhai is an artificial lake, covering a total area of 87 acres (35 hectares). It formed part of the ancient waters of the Yuan Dynasty about 700 years ago and was exclusively for the royal family.

Houhai is in the center of Beijing, facing the Forbidden City in the distance. It is said that the waters of Houhai are connected with the “dragon vein” (an important and invisible artery that can keep things at peace, steady, and prosperous according to Daoism) of the Forbidden City and the lake is considered to be an awesome place. People sled on the frozen lake in winter.

Therefore, the monks built temples there, the officials and nobles built their mansions and gardens there, and celebrities also moved to the lakeside one after another.

In summer, the lotus flowers in Houhai come into bloom. You can take a boat out on the lake and admire the flowers. There are wild mandarin ducks in the lake. In winter, the lake freezes and becomes a natural ice rink where people can skate and sled.

2. Wander in Ancient Lanes in Houhai

The street structure of Houhai was first formed in the Yuan Dynasty. Many buildings are very old and have the typical characteristics of traditional Beijing architecture.

Yandaixie Street was known in the past as an artists’ and artisans’ street specializing in jade pieces, calligraphy, paintings, and tobacco products. Nowadays, it is a good place for anyone who is looking for delicious food, tobacco stores, watch stores, and antiques stores. Nanluogu Lane was built in the same period of the Yuan Dynasty and has a total length of 787 meters. It is one of the oldest neighborhoods in Beijing and has a history of more than 740 years.

It has the reputation of being one of the oldest hutongs in Beijing. This street is now a favorite shopping, bar, and restaurant street for tourists and expats, and some of the stores and restaurants are owned or staffed by expats.

Houhai Bar Street, or Shichahai Bar Street, is another feature. When it comes to bar streets in Beijing, many people may think of Sanlitun Bar Street. The bars in Sanlitun are bigger, more boisterous, and perfect for night owls.

The bars around Houhai are not very large and are decorated with simple old furniture, green plants, and special ornaments. You can enjoy relaxing in these bars as you listen to melodious music, read a book, drink a cocktail, and appreciate the scenery. Perfomance in the bar

Pass By Bar stands out among the bars. It opened in 1999 and was the first “travel” themed bar in Beijing. Abundant travel books are offered there. Many people who like traveling share their interests there. You can look at the pictures they took during their trips and listen to their stories. The bar is in an independent old courtyard. In summer, the yard will be covered with lush gourds and loofahs.

If you are a football fan, don’t miss Zoom Club, which is a British-style football bar. You can watch matches on large television screens. You can also indulge in the live jazz atmosphere at East Shore Live Jazz Café.

Some bars charge high prices. It is not as cheap as you might have found it to be 10 years ago. When you consume drinks in a bar, please be aware that some bars may have shills. They try to approach you to make you consume drinks at high prices. Make sure you confirm the price before ordering to avoid being overcharged. Read more on the 10 Most Hidden Scams in Beijing. Beijing has many attractions besides Houhai. Use our Create My Trip service to start planning your Beijing tour. We are happy to tailor-make your Beijing trip according to your interests and needs.