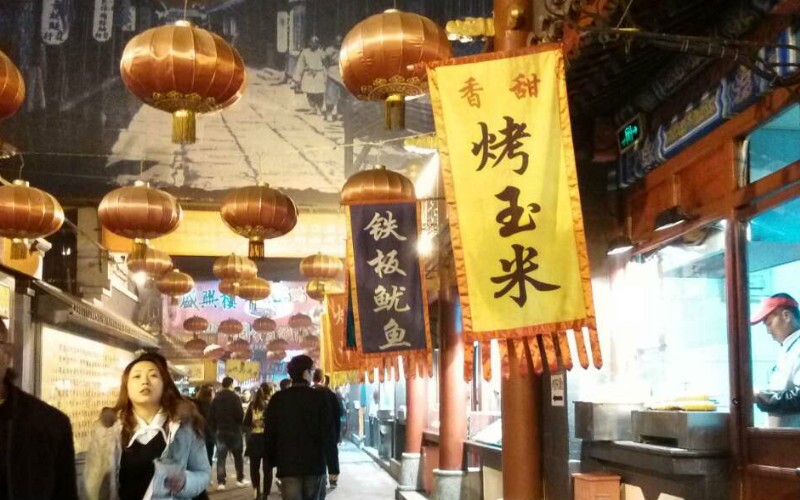 The modern metropolis of Beijing has hundreds of different types of snacks after thousands of years’ of development and the movement of a wide range of people. Beijing snacks combine numerous flavors and styles, such as Hui, Mongolian and Manchurian flavors, and imperial styles of the Ming (1368-1644) and Qing (1636-1911) dynasties.

Food streets or snack streets are always popular destinations for locals and tourists, especially at night. There are many such streets in Beijing, some have been around for a long time, while some are newly thriving. The following food/snack streets, or street snack shops, are among the famous in Beijing.

Wangfujing Snack Street is conveniently located just beside Wangfujing Street, the busiest shopping street in Beijing. It is a very popular tourist destination, and is especially busy at night. Besides street foods, there are also souvenirs and handicrafts for sale here, so you can kill two birds with one stone.

Common traditional snacks such as meat kebabs, dumplings and tanghulu (candied fruits popular in Beijing's winter) can also be found here. We've also put together snack menu help in case you need help figuring out how to ask for what you want.

Prices range from RMB 10 per snack to RMB 30-40 for the bigger portions.

Guijie (Ghost Street) is the earliest popular snack street in Beijing. The 1.5-kilometer-long Guijie is full of snack shops and restaurants, which serve snacks with different flavors at a cheap price. It is well-known for serving spicy food hailing mostly from Sichuan province.

Guijie is popular for all foods spicy: including hot pot

One food item that is undoubtedly high up on Beijing's favorites are hot and spicy crawfish. Guijie operates around the clock, and it's bustling every day between six in the evening until the early hours of the morning. This is also one of the best places to come for a meal very late at night as many of the restaurants continue to serve until approximately 4am.

Prices of the restaurants here start at approximately RMB 50-60 per person, and can go up to RMB 300 depending on whether you are looking for something fancy.

Niujie (Ox Street) is famous for its large muslim community and Niujie Mosque, which is the largest and oldest mosque in Beijing. Twenty-three ethnic groups live in the area, with Hui people making up the majority.

This area is the place to go for food items and snacks popular with the muslim Hui community, mostly made of beef and mutton, various pastries, and other traditional Beijing snacks.

Street snacks around here are relatively inexpensive, starting at a few RMB for pastries.

It is one of the more upscale food streets in Beijing, with nearly 50% of consumers made up of nearby business people. Dozens of upscale restaurants gather on this 3-kilometer-long street including Hunan cuisine, Sichuan cuisine, Jiangsu cuisine and many other famous Chinese regional cuisines. Several Cantonese restaurants featuring seafood here rank amongst the best in Beijing.

Restaurants in this area start around RMB 100 per person and can go up really high for the fancier Cantonese seafood restaurants.

As one of the most popular hutongs to visit around Beijing, you'll be right in thinking that there should be lots of snacks to try in Nanluoguxiang, because walking around makes people hungry!

While the snack shops there aren't necessarily the oldest and most traditional, you'll find more modern renditions of Beijing snacks here instead. Dumplings with crazy and fun fillings, bubble teas (which they did not have in the olden days, but which are delicious and great after a day of exploring), and lots of barbecue snacks on sticks, easy for walking.

Snacks here start off at approximately RMB 5-10 for barbecued snacks, and you will pay around RMB 15 for bubble teas.

As a famous commercial street in Beijing, Qianmen Street is well-known for its delicious snacks and food. There you can try Beijing’s most famous dish (Peking duck) in Quanjude Restaurant, which ranks number one among Beijing roast duck establishments in Beijing.

Suzhou Street is located near Zhongguancun, a high-tech hub in Beijing. Suzhou Street got its name from the city of Suzhou in Jiangsu Province because of its special design, imitating the streets and shops of Suzhou. It is said that the streets served as entertainment places for emperors and their concubines.

If you want to try the most traditional Beijing food, then you must visit Ping’an Street, which is also called Ping’an Avenue. Many buildings and shops of the street were constructed during the Qing Dynasty era. And many of the houses belonged to the Qing royal family.

Located in Chaoyang District, Xiaoyun Road is famous for its international cuisine. If you would like to try different countries’ food in Beijing, then Xiaoyun Road is a good place. Thai food, French cuisine, Italian pasta, and many other cuisines are offered in the delightful foreign-style shops and restaurants situated along the sides of the street.

With a history of more than 700 years, Huguosi Snack Street is the most famous snack street in Beijing. It is situated in the east of Beijing. Huguosi was a temple constructed in the Yuan Dynasty (1279–1368). It held temple fairs on the 8th day of each Chinese lunar month in medieval times.

Later, the area surrounding Huguo Temple became a street that sells snacks. Famous snacks and foods there include ‘snail rice noodles’ (thin spicy noodles with no snails), ‘cold noodles’, Beijing traditional yogurt, and beef wrapped in a pancake. You can also try famous snacks from Sichuan, Tibet, Yunnan, and Xinjiang on Huguosi Street.

If you have special food requirements, or are especially interested in trying any of the street foods you read about above, please let us know when you are booking your China Highlights tour. We can make the reservation for you and tailor your itinerary to fit your needs.

We also have some ready-made food tours to make things easy if you can't choose!