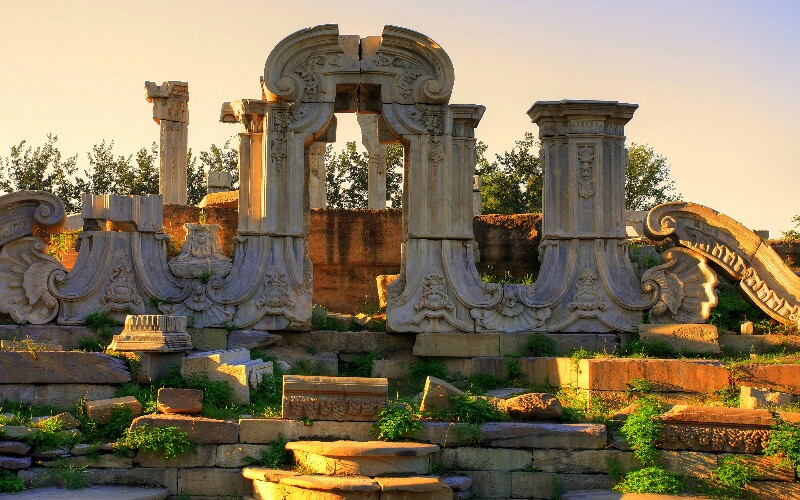 The Old Summer Palace, also known as Yuanmingyuan Park, used to be the most splendid royal garden, reputed as being the "Garden of Gardens". Victor Hugo once described it as: "In a corner of the world, it is one of the wonders of the world. The miracle called the Old Summer Palace." However, a fire destroyed the grand garden, taking away its glory and only leaving behind the ruins and history.

Yuanmingyuan was built as a gift for the Kangxi Emperor's fourth son, Yongzheng. He expanded the garden greatly after Yongzheng's reign in 1725. The waterworks, lakes, streams and ponds were introduced to the garden during the Yongzheng time. The famous 28 scenic spots were named at this time. The second expansion of the garden were underway during Qianlong emperor's reign. Number of the scenic spots increased to 50 during this period. In 1744, Qianlong Emperor's court painter produced an album to depict the Forty Scenes of Yuanmingyuan.

Yuanmingyuan is the biggest garden with three scenic areas: the northwest area, Jiuzhou, and Fuhai Lake. Most of the attractions are in Jiuzhou (Nine Provinces 九州).

Changchunyuan has the most famous attraction, the marbled ruins of the Western Mansions (Xiyang Lou). You can see the best-preserved relics there - the Great Fountain Ruins (Dashuifa ‘Great Water Way’), which used to be a fountain that was built in 1759, and the Guanshuifa (‘Watch Water Way’), a place where emperors appreciated fountains.

Qichunyuan is the smallest garden and it was the place where concubines lived. Flower gardens and pavilions are dotted around the area.

History of the Yuanmingyuan Garden

For Chinese people, the Old Summer Palace is not just an attraction. Its destruction was a heart-wrenching piece of modern China’s history. From 1709 to 1860, it was the grandest imperial garden with over 1,000 palaces, 100 viewing points, and thousands of treasures, covering an area of 350 hectares. It embodied the highest level of oriental fantasy art.

The Construction - Who Built the Yuanmingyuan

Yuanmingyuan was originally founded in the reign of Emperor Kangxi (1661–1722) in 1709 as a gift to his fourth son, Emperor Yongzheng (1678–1735). After Emperor Yongzheng ascended to the throne, the Old Summer Palace continued to expand. The construction and expansion lasted for 150 years. It was extolled as the "Versailles of the East".

It was just how you imagine a gorgeous palace to be: marbled palaces, stately temples, towers, an extensive collection of gardens, pools, and fountains plus swarms of swans, ibis, and peacocks. The whole palace was painted and decorated with gleaming marbles, precious stones, colored glazes, enamels, bronze and stone wares, statues, and sculptures. This grand palace was like "the thousand and one dreams of the thousand and one nights' built by "architects who are poets".

Who Destructed and Looted Yuanmingyuan in 1860

The Old Summer Palace was known as the "Versailles of the East", but its glory and magnificence ceased in 1860. During the Second Opium War, British and French troops invaded Beijing, ransacked the Old Summer Palace, and looted its treasures, which are now displayed in museums around the world.

After the looting, they set fire to the entire palace. It was said that the fire lasted for 3 days and nights. Almost all the buildings were burnt down. Only crumbling marble buildings remained. The splendor and magnificence of the Old Summer Palace disappeared in this fire.

Why the French and British Troops Burnt Yuanmingyuan in 1860

During the Second Opium War in 1860, British and French troops marched from the coast Tianjin and then went to Beijing for negotiation with Qing Dynasty empire representatives. Two envoys, Henry Loch and Harry Parkes and their escort were taken into prision by the Qing general Sengger Rinchen. After that 20 British and French captives were tortured to die in the prison. In order to revenge the Qing Dynasty government, the British High Commissioner to China, James Bruce, ordered the troops to destruct the garden completely. The garden is so large that it took 4,000 men 3 days of burning to destroy it.

In 1900, the Eight-Nation Alliance invaded and occupied Beijing. Yuanmingyuan was devastated again and the remaining treasures were looted. They destroyed buildings, sawing off pillars and reducing wooden bridges to piles, and pulled down the trees with large ropes. When they had finished, the Old Summer Palace was completely destroyed.

The Reconstruction of Yuanmingyuan

After the founding of the People's Republic of China in 1949, the Chinese government attached great importance to the protection of the Yuanmingyuan ruins. A park has been established on the site of the ruins. The facilities and landscaping construction in the park have been continually improved.

Although damaged, most of the building sites can be found and dozens of rockery stones are still visible. Visitors can imagine the former grandeur, and are able to learn about and remember the history through these ruins. What's more, the complete picture of the Old Summer Palace in its heyday is displayed in the exhibition hall.

Some of the reconstructed buildings and scenic spots offer a place for visitors to relax.

Twelve statues with Chinese zodiac heads and human bodies were originally on the fountain in front of the Hall of National Peace in the Western Mansions area. They were designed by Giuseppe Castiglione, who came from Italy and was a painter in the Qing Dynasty court. The 12 animals represented the 24 hours of each day. Each bronze statue took turns spraying water from its mouth every 2 hours.

Yuanmingyuan Palace vs. the Summer Palace

Map of Yuanmingyuan and Summer Palace in Beijing
Recommended Tours:

Things to Do in Yuanmingyuan

How to Get to the Yuanmingyuan Garden

A battery car service is available for the big areas:

Travel with us to discover more about Beijing and its attractions. We do private tours and are happy to tailor-make your tour according to your interests and requirements.