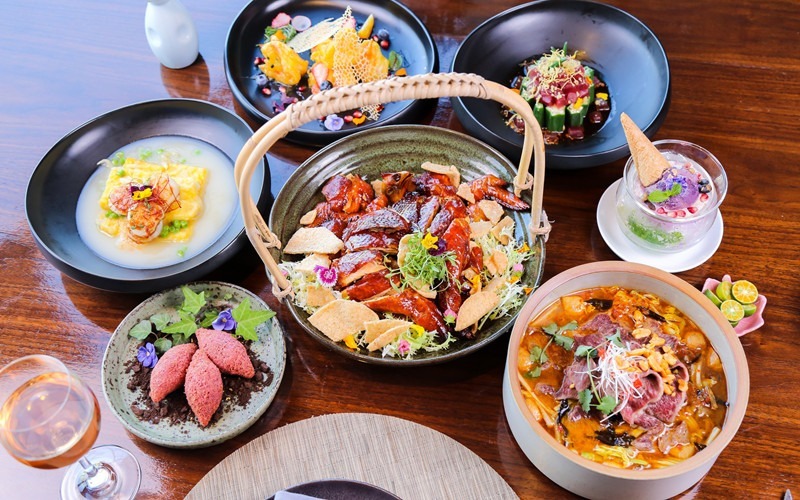 The Top 15 Beijing Foods You Must Try

Find out what to eat in Beijing. This Beijing food list has the top Beijing dishes and snacks with recommended restaurants and areas to find them in.

With the exception of Beijing's best-known culinary export, Peking duck, most of the city's most famous dishes have been adopted from surrounding areas. Regardless of their origin, all of the following dishes are now fully ingrained in Beijing life and can be sampled at restaurants throughout the city. Enjoy!

Beijing roast duck, or Peking duck, is the epitome of Beijing cuisine and the dish you must try when visiting Beijing. The dish is mostly esteemed for the thin, crispy skin, with authentic versions of the dish serving mostly skin and little meat.

While sauces and accompaniments will vary between restaurants (the most common being scallion and cucumber) it is difficult to go wrong with roast duck in Beijing. If you eat at one of Beijing's more famous duck restaurants it will also be accompanied by a short demonstration on the correct way to assemble a Peking duck wrap using chopsticks.

Jiaozi is another dish that can be found anywhere across Beijing.

While there are a number of better-known dumpling restaurants and chains, some of the tastiest dumplings (and most interesting experiences) can be found in smaller, less conspicuous family eateries where dumplings are the only thing on the menu. At these restaurants you can often sit and watch the next batch of dumplings being rolled and filled as you eat.

A plate of Jiaozi with a soy sauce, vinegar and chili dip is synonymous with Northern Chinese cuisine.

Jing jiang rousi is another dish incredibly popular with local Beijingers, and unlike many of the city's other popular dishes, it originated in the capital. Its popularity may stem from its simplicity: sliced pork cooked in a sweet bean sauce, served with soy bean wraps. Jing jiang rousi is a necessary component of any authentic Beijing dining experience.

Zhajiang mian is very popular when it comes to traditional Beijing cuisine, and is sometimes referred to simply as 'Beijing noodles'.

It has three main ingredients: wide hand-pulled noodles, vegetable pieces, and pork. Vegetables vary seasonally, but there are never less than seven kinds. It is an ideal lunch time snack for visitors short on time as it is usually ready seconds after you order. As an added bonus it is very inexpensive.

Mongolian hotpot, a dish that's history dates back over 1,000 years, is as much about the enjoyment of the cooking as it is the taste.

Traditional hotpot meals involve sitting around a large pot of boiling soup, in which you cook your own food. Although Mongolian hotpot usually involves a large amount of lamb, any number of meats, vegetables, and breads are available. These are sliced thin to ensure they cook quickly and evenly.

This northern-Chinese style of hotpot uses a soup that is less spicy and generally less flavored than its southern counterparts, with more emphasis being placed on the ingredients that are cooked rather than what they are cooked in.

Originating in the city of Baoding in northern Hebei Province, Beijing has adopted the donkey burger as its own. Restaurants offering this dish serve a number of different donkey meals, however the one to try is the donkey burger. Shredded donkey meat is served in a piping-hot, crunchy bun with a green pepper relish.

The contrast between the succulent meat, crunchy bun, and sweet relish make it incredibly tasty and you are unlikely to stop at one. Look out for a big 驴肉 ('donkey meat') sign clearly visible on the front of all restaurants offering this food.

The literal translation of this dish — 'dry wok potato wedges' — offers diners a fairly accurate idea of what to expect.

Slices of potato, crispy pork, and chilies simmer in an iron pot sat atop an open flame. As you are working your way through the meat and potatoes, the bed of sliced onions that is hidden underneath slowly caramelizes in oil, leaving you with a delicious snack to finish your meal on.

It is a dish best enjoyed during the colder months, but is popular with locals all year round.

This dish is another great option for potato lovers. Thinly shredded potatoes are stir-fried with green peppers and seasoning and can be served hot or cold. Don't be fooled by the plain look of the potatoes as they are coated in a sweet gloss which give the dish its flavor.

Unlike the donkey sandwich, this dish doesn't actually contain meat of any kind, let alone donkey. Rolling donkey refers to a kind of traditional Beijing snack with a soft skin made of glutinous rice flour and a red bean stuffing, also known in southern China as 'rolling horse' (马打滚 mǎ dǎgǔn).

Tuckahoe pie is a traditional paper-thin snack in the shape of a full moon, which is popular in Beijing. It consists of a basic pancake wrapped in sugar, honey, and an assortment of nuts.

According to a legend, tuckahoe pie originated in the Southern Song Dynasty (1127–1279), and the preparation method and the required equipment are well documented. The herb tuckahoe has many medicinal properties, and therefore it is popular with Chinese people, especially women and the elderly.

11. Tanghulu — Candied Fruit on a Stick

Candied Fruit on a Stick

Tanghulu, the "Chinese toffee apple", is an old Beijing-style dessert consisting of a skewer with fruits dipped in liquid sugar then dried. They are about 20 cm (8”) long and include many kinds of fruits coated in sugar, such as crabapples, kiwis, cherries, tomatoes, pineapples, grapes, strawberries, and so on. When you bite into a tanghulu, it has a wonderful crunch!

In Beijing, they are easy to buy from carts by the side of the street, and are popular with kids.

Pea flour cake is a traditional snack from Beijing. It is made of white peas. It used to be an imperial snack, and was one of Emperor Dowager Cixi's favorites. It has a yellow look, with a fine and smooth texture that melts in the mouth. Locals usually eat it in spring.

Aiwowo is a traditional dessert with a long history. It used to be served as a royal food. Its skins are made of glutinous rice flour, and the various stuffings are suitable for all ages and tastes. They include walnuts, sesame seeds, melon seeds, yam paste, and other natural ingredients.

The history of this food dates back to 1876. Locals usually eat dalian huoshao for breakfast. These deep-fried rolls of wheaten dough filled with minced pork and vegetables taste similar to fried dumplings, but more juicy.

A zhizi is an iron plate made of iron rods, which can be heated and used for roasting, so that the excess fat of the barbecue drips away through the gaps. It is mainly used for halal beef and mutton.

The firewood for the barbecue is mainly aromatic wood, such as pine, jujube, pear, and other fruit trees', so that the aroma is imparted into the meat. Side dishes are usually green onions and coriander.

We can arrange for you to eat all of the foods above in authentic Beijing restaurant or snack street settings. Our Beijing tours, almost without exception, include a chance to eat roast duck.

You can request to eat any one of these tasty dishes, or anything else you would like to try, when customizing your tour with our travel advisers.

If you are particularly interested in enjoying China's top foods in China, as well as the top sights, check out: