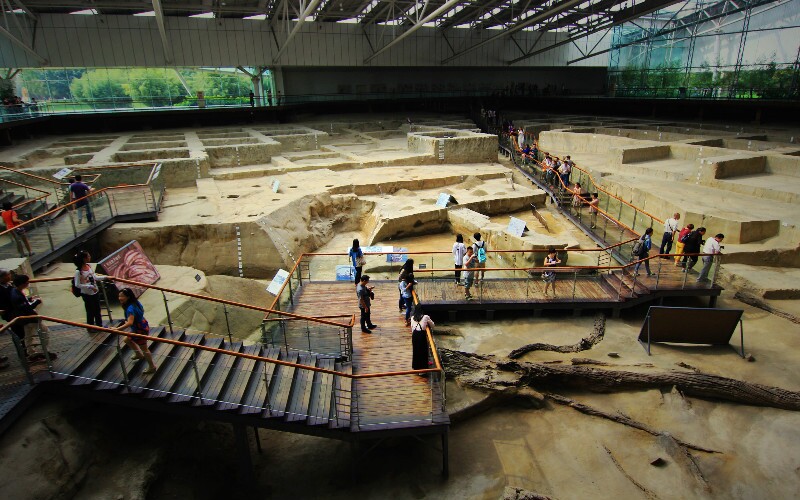 The Jinsha archaeological site and Jinsha Site Museum complex is located about 7 kilometers or four miles west of the center of Chengdu in the Qingyang District. So it is an easy place to visit. There is a big museum and park area that measures about 530 meters by 400 meters (.3 square kilometers) that highlight the discoveries of the Bronze-age site in Jinsha. There are three large buildings and the rest of it is park is parkland with a stream called the Modi River. So it is built to be a combination of a museum and a green park, and there are also entertainments and amusements for the visitors. It is thought that the people who lived there about 3,000 years ago and left the tombs and other remains were part of the same culture as the people of the earlier and more famous Sanxingdui site that is about 50 kilometers northeast. It is an archaeological highlight to visit in the Chengdu area.

Both the recently discovered Sanxingdui site that dates to about 1,200 BC and the Jinsha site that dates to about 1,000 BC surprised archaeologists. The large cast bronze objects that were found at the Sanxingdui site astonished archaeologists and historians because they didn't know that the civilization existed and because the objects showed an unusually high level of bronze technology. The bronze artifacts at Jinsha were not as large, but because objects looked similar, it was thought that the Jinsha people were of the same culture as the Sanxingdui people.

You can see many of the thousands of gold, bronze, jade, and stone objects at the museum building. In the 74 acre park complex, there are four main places of interest.

The Relic Hall
The Relic Hall is south of the Modi River. It has a semicircular shape and covers an area of
7, 588 square meters (1.87 acres). It is a steel frame with glass or plastic siding that covers over a wide area of excavation. The site was excavated in a pattern of square shallow pits. You can see the pits. The pits are mainly dirt, but you can see pictures of the artifacts that may have come of out of the pits and bones. A walkway was built so that people can walk in the midst of the pits and over them.

The Exhibition Hall
This exhibition hall is shaped like a trapezoid. It is located north of the Modi River. It has four floors. One is underground. This hall contains the specimens in many displays. It is a futuristic building also.

The Protection Center for Cultural Relics
This center is located in the western corner of the park. There is a lecture hall and theater, and entertainment is put on there.

The Tourist Receiving Center
The center is equipped with a variety of services and facilities for parking, visitor reception, rest areas and amusement.

The Garden
Besides the buildings, you can walk around in the park. You can see the sculpture and artwork.

Historical relics displayed in the museum

The Sanxingdui and Jinsha culture is enigmatic. There is no mention of them in the history of other countries, and their origins and history isn’t clear. What is clear is that they had advanced bronze metallurgy technology for their time. By mixing copper, tin and lead, they made a bronze alloy that was used to make the world’s tallest bronze human statue of the Bronze age that has ever been discovered. The material used for making their bronze came from the same source as was used by the kingdoms along the Yellow River, so it is believed that these people had extensive trade links. It is believed that the Sanxingdui site about 40 kilometers north of Chengdu was a main center of the culture about 3,200 years ago and that the Jinsha site was perhaps a later capital town of that culture 3,000 years ago. The remains of this culture surprised archaeologists. It was assumed that the basin of the Yellow River was the place of origin of civilization in East Asia. The Sanxingdui site was revealed in 1987, and the Jinsha site was uncovered in 2001 and turned into a museum complex.

Like the Sanxingdui site, the Jinsha site was discovered by accident. On February 8, 2001, construction workers noticed metal and stone artifacts in their construction site. Thousands of artifacts including stone daggers, elephant tusks, jade artwork and tools, gold masks and ornaments, and bronze objects have been discovered. Patterns on figurines and artifacts match those from Sanxingdui suggesting that the people were of the same ethnic group. However, no large bronze piece like those of Sanxingdui has been found. However, the stone statues are remarkable.

The Jinsha Site Museum was built between 2004 and 2006. Among the highlights to be seen are very beautiful multicolored jade jewelry, weapons and instruments. These were not made from simple green jade stones, but the colors and patterns in the stone are so rich that they look like pieces of opal. Some amazingly designed gold pieces are also a museum highlight.

The museum is about half a mile away east of the 3rd Ring Road about 7 kilometers (4 miles) west of the center of the city.