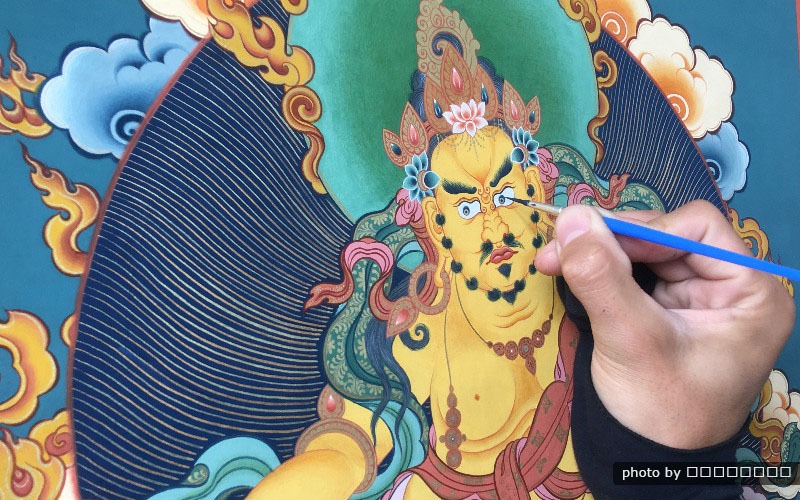 Where is Ganden Thangka Festival Celebrated

The Ganden Thangka Festival is an important festival at the old Ganden Monastery that was the leading monastery of the Geluk tradition of Tibet.

Every year, thousands of people circle the monastery ruins, enter inside to view the Buddha, pray, and get blessed, and then they go outside to sit on the hill or try to get close to the wall where the big and vividly woven thangka is displayed.

It is a major highlight of many Tibetan Buddhists' year, and some poor people walk for weeks to get to the place before sunrise that day. The scenery in the area, combined with the sight of thousands of people dressed traditionally, is amazing.

How is Ganden Thangka Festival Celebrated

The Gandan monastery is about 36 kilometers northeast of the Potala Palace in Lhasa. Many people line up for buses after midnight in various places in Lhasa to arrive before sunrise.

Hundreds of people first like to climb up a small nearby hill to watch the dawn. On a clear morning with only stars illuminating the sky; slowly, the sunlight emerges over the horizon and lights the landscape in majestic hues of gold and red and enliven the surrounding barren hills, the meandering river, and the green fields.

Westerners unused to the stark high-altitude scenery of Tibet are often mesmerized as people chant prayers and spin prayer wheels and do a ceremonial march around the monastery grounds.

Then the crowds head into the monastery complex. Much of the complex has been rebuilt, and people wander from one temple to the next with yak butter offerings in their hands.

Every room becomes packed with people waiting to glimpse Buddhas and receive the monks' blessings, and areas in the complex explode with exotic sights, sounds, and smells.

The smell of burning yak butter lamp smoke and yak butter offerings is amazingly potent. On such festive occasions, the pilgrims dress in their finest festival clothes.

Also, they elaborately decorate their animals such as yaks, horses, and donkeys who are scattered around the monastery. However, some of the wealthier and younger people who arrive on the buses wear modern clothes like jeans and t-shirts.

Then slowly the crowds inside disperse and drift over to the hill outside. The drifting crowds portend that the appointed hour has arrived. Thousands of people are scattered all over the mountain.

Most people compete to get close to the thangka. Then the young monks march out blaring horns, their drums beating, and yellow-crested figures continue the historic celebration for the new year.

iles of incense are fanned into flames spreading a sweet aroma, and pillars of smoke arise. People are filled with tension.

Then the older monks in their red and yellow robes take center stage. The crowds cheer and pray and spin their prayer wheels fervently. They yearn to see the new thangka unveiled.

Then as the presiding monks pray, a huge tapestry of hand-woven cloth is raised and covers the big wall. The people see hundreds of symbols and then the Buddha figure, and they pray even more vigorously.

The thangka is usually about 200 feet wide and 150 feet tall, and some are overwhelmed and swooned from the powerful sight. They push to try to touch their foreheads to the woven fabric and throw their white prayer scarves at it as a way to pray.

The old monks bless the thangka with yak oil and prayers. The mind-changing incense smoke, their hypnotic music, and the psychedelic colors are hypnotic.

Then the monks lower the thangka. Tentatively, some people start to disperse and drift away. Most people make their way to a mountainside where they gather with friends and family for a festive meal.

At its height in times past, thousands of monks lived there. During the Cultural Revolution, army artillery shelled the structure. The Dalai Lama moved to India where another monastery called Ganden monastery was constructed, and monks now live there.