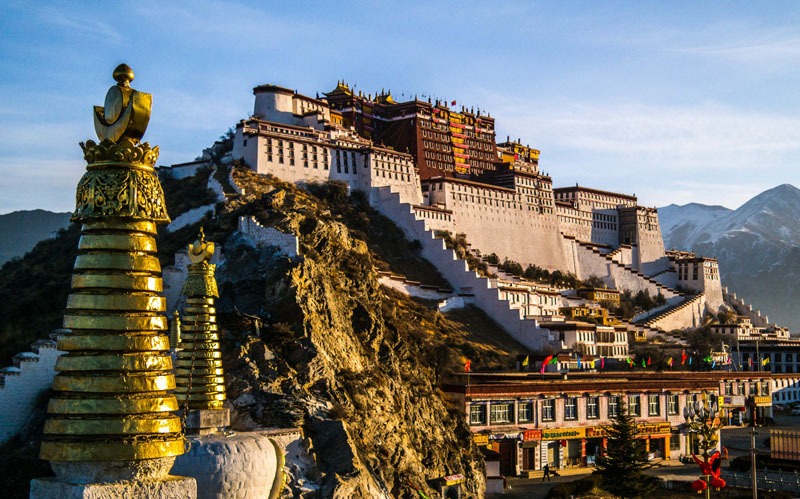 The Potala Palace is a Tibetan castle located on Red Hill with an elevation of 3,750 meters(12,300 feet) above sea level in Lhasa, the capital of China's Tibet Autonomous Region.

It was originally built in 631 AD by Songtsan Gampo (the first king of the Tibet kingdom) as a royal palace as well as a defensive fortress.

It has been the winter palace residence of the Dalai Lamas during the past dynasties meanwhile it also had become a ruling center of the politics and religion in Tibet.

The Potala Palace was listed as a world cultural heritage now. The open area of Potala Palace is the main building which consists of the White House and the Red Palace which contains a large number of cultural relics and treasures inside.

Why the Potala Palace is Remarkable

The Potala Place is considered to be one of the wonders of the world for its location, physical structure, and its importance in Tibetan history and religion.

The Potala Palace has more than 1,000 rooms with an area of 130,000 square meters. In terms of architecture, it is a palace holding ingenious Tibetan architecture with stone and wooden structures that have withstood centuries.

Contact us to know more about  World Wonders in China

Please scan the QR code to contact by WeChat

Who built Potala Palace and for What

The construction of a 'White/Red Palace' has a 1,300-year history. The first Potala Palace was built in AD 631 by Songtsen Gampo, the first king of Tibet, after uniting the kingdoms of the Qinghai-Tibet Plateau and choosing Lhasa as his capital city.

Although Red Hill's veneration as a holy site may have played a part, according to historical records, the first Potala Palace was mainly built there for military purposes, because it was an ideal location to defend against foreign aggression.

It is also said that the first Potala Palace was built for Princess Wencheng of the Chinese Tang Dynasty (618–907) who married Songtsen Gampo in 641, however, construction ended before the marriage and probably began before they first met.

Then, in AD 877, following the Tibetan Empire's collapse, the Potala Palace was almost completely destroyed by Tibet's warring tribes and only two houses of the Potala were left.

This structure was burned to the ground in 877 during a war that ended with Tibetan Empire's collapse， the Potala Palace was almost completely destroyed by Tibet's warring tribes and only two houses of the Potala were left.

A Winter Palace for Dalai Lamas in Tibet

The building of a second Potala Palace followed the rise of the Dalai Lamas in Tibet. The 5th Dalai Lama cemented lamaic rule with the Potala's construction in 1649 as a place of government and spiritual focus.

Red Hill was chosen as the site, first for its location between important monasteries and the city, but also its spiritual association with Potala, the spiritual home of Chenrezig, 'the Lord Who Looks Down', who the Dali Lamas are believed to represent on earth.

The 5th Dalai Lama Lobsang Gyatso, in the years 1645, organized the construction of a second Potala Palace, and he visited the site and participated in the architectural design in person.

After 3 years' construction, the Potala's White Palace was completed and it became the winter residence for later generations of Dalai Lamas. In the following 300 years, construction and renovation of the Potala Palace continued.

What is the Potala Palace Used for Today

The Potala Palace was listed as World Cultural Heritage in 1994. The majestic palace is no longer a symbol of political power but is still an important place for pilgrims. It is still home to Tibetan monks, and they chant there every day. A lot of Buddhists go there to light a lamp for prayer.

Today's Potala Palace is also known as one of the most popular museums in the world with a large collection of sutras and important historical documents inside. It is a good place to appreciate Tibetan culture, history, religion, and architecture.

What's Inside the Potala Palace

Murals are an important part of the artwork of the Potala Palace. The total area of murals is more than 2,500 square meters. The vivid themes of the murals include historical figures, historical stories, Buddhist scriptures, religious myths, architecture, folk customs, sports, entertainment, and so on.

The most famous mural in the palace is the one showing scenes from when Princess Wencheng was married to Tibetan King Songsten Gampo, the statue of twelve-year-old Sakyamuni Buddha was brought to Tibet, and the Tibetan people welcomed the statue devoutly and happily.

Thangkas, also known as scroll paintings, are most representative of Tibetan art. Painted on silk, cloth, or paper, the main theme is framed with colorful decoration.

The contents of thangkas are usually Buddha incarnations, Bodhisattvas, and Tibetan Buddhist masters, religious customs, and so on.

There are more than 10,000 pieces of thangkas in the Potala Palace amounting to about 340 square meters.

The most outstanding sculptures are the cast-iron Buddha statues, which can be over 10 meters tall, while the smallest one is only a few centimeters tall.

There are eight Stupas in the Potala Palace, occupying an area of 700 square meters. Each stupa houses an entire body of a Dalai Lama. The stupas are built in various sizes, from 10 meters (32 ft.) high. They are wooden structures set with gold and precious jewelry.

The most luxurious is the fifth Dalai Lama's stupa, which is 15 meters (50 ft.) tall and wrapped in gold. More than 15,000 jewels decorate it, including diamonds, rubies, emeralds, pearls, and agates.

Housed within the Potala's amazing stone and wood structure are articles and artifacts from Tibetan history, religion, and culture. Antiques that are centuries old and incredible works of art grace every area of this mountain top palace.

The elaborate works of art tell many stories of the Dalai Lamas and the history of the Tibetan people and depict different customs and traditions held dear in this beautiful part of the world.

The Potala Palace keeps nearly 40,000 volumes of antique texts in Mandarin, Tibetan, Manchu, Mongolian, and Sanskrit. 80% of the texts are Buddhist scriptures.

The most precious scripture is the Tibetan Kagyur of the Tripitaka, which was written with ink made of gold, silver, coral, iron, green diamond, red copper, white conch shell, and pearl powder.

The Potala Palace's shape gives it a magnificent appearance. The main building of the palace is 115 meters high with a total of 13 stories. The palace structures are made of stone and wood, and the palace walls are built with granite.

As the palace is built on a hillside and the terrain is uneven, the interior is an asymmetrical architectural layout. The outside layout of the Potala Palace is the two wings of the White Palace in the east and west with the Red Palace in the middle.

Outside Layout of Potala Palace

Contact us to find out more interesting facts about Potala Palace

The White Palace was home to ten successive Dalai Lamas and their courts. Also located there are the former offices of the Tibetan government, governmental assembly halls, and other official offices.

The fifth Dalai Lama completed it in 1649, and therefore, this structure pays homage to him in greater measure than previous Dalai Lamas or those that would follow.

White Palace in the evening

Contact us to create a festival tour in Tibet

Located in the center of the Potala Palace, the Red Palace was designed in a shape of Mandala (Sanskrit for 'circle') layout —an Indian Buddhist design idea with elements emanating from a central hub. It was built in 1690 during the time of the 6th Dalai Lama.

Golden roofs surround the Red Palace — the seven roofs are made of gilded bronze. They are the tops of the holy stupas of the Dalai Lamas. Every golden roof is decorated with one to five flower-and-bell-shaped spires, which also serve as lightning conductors.

The Red Palace was used as a house of prayer by Dalai Lamas. This part of the Potala Palace was dedicated to the study of Buddhism and the advancement of the religion.

In terms of architecture alone, the Potala Palace is not only a palace or a fortress but also a religious sanctuary and a mausoleum.

The best time to travel around Tibet is between April and October, and the peak season is July to October. See more on Tibet Weather.

The Potala Palace is a protected site. For this reason, the government has limited the number of visitors allowed each day, as well as the visit duration, during peak season.

In peak season, about 3,000 visitors per day are allowed and visitors have approximately 1 hour to visit the site. If you travel with us, we will do our best to book your tickets.

Be aware that your visit may not be at the planned time (for example, the itinerary may show that you will visit the Potala in the morning, but we may only be able to book you a visit in the afternoon).

Also to find out the Best Time to Visit Tibet

3. Climbing steps at high altitudes requires good physical condition. There is no lift to the palace or inside, so visitors need to climb 100 meters (300 feet) of steps. Go slowly and enjoy the view to avoid altitude sickness or other discomforts.

Steps to the top of Potala Palace

4. Photography, video equipment, and other recording devices are not allowed in the palace.

5. Flammable items (such as alcohol, sprays, lighters, cigarettes) or sharp items (such as scissors and even nail clippers) are not allowed in the palace. Two good options are to carry a few things as you can when you visit the Potala or to deposit your bags at the entrance.

1. What is the meaning of Potala?

Potala (Tibetan, from Sanskrit; Putuo in Mandarin) refers to the fabled mountain residence of the Bodhisattva (Buddhist saint) Avalokitesvara ('Looking-Down Lord', Chenrezig in Tibetan, Guanyin in Mandarin), who embodies the Buddhist 'eye' of compassion and is believed to manifest as the Dalai Lamas.

Tibetan people began to venerate Red Hill (Marpori) as a holy site of Buddhism in the 7th century where the soul of Chenrezig resides, and thus it was known as their Mount Potala.

2. Who lives in Potala Place now?

After the 14th Dalai Lama fled to India in 1959, there was no one living inside. Not until the 1980's the Potala Palace was opened to the public and has been a museum. In 1994, it joined the UNESCO World, Heritage List.

Find Out More about the Potala Palace in Person

Nothing rivals going to the Potala to listen to its history in person. China Highlights' Lhasa tour guides are picked from the best. They can tell you more tales of Tibet history, which will mean so much more when in context.

If you are interested in touring Tibet, we recommend our popular Tibet itineraries for inspiration:

If we haven't listed what you're looking for, no problem! We can tailor-make a tour to visit Lhasa your way.