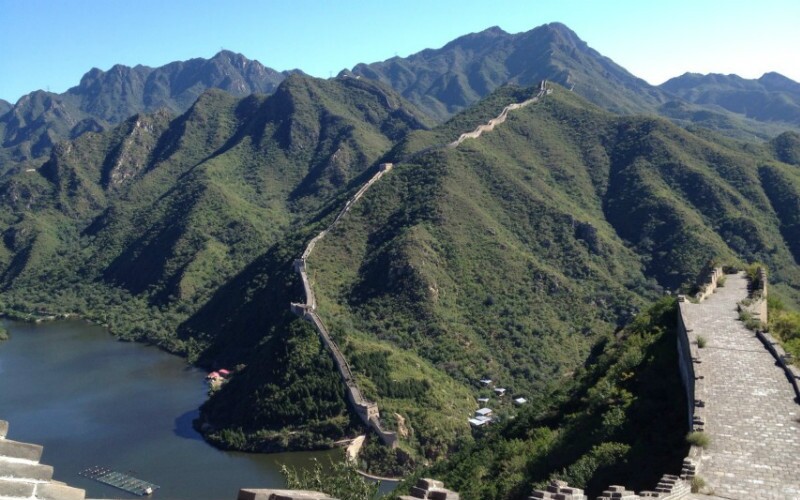 Huanghuacheng's Great Wall area is a beautiful tourist spot, combining mountains, lakes, and ancient Great Wall of legendary solidity. It is the latest section to become popular with hikers. It provides a challenge for hikers because the paths are steep and out of repair.

Important Facts You Should Know To enhance the defense of the northern border, the emperors of the Ming Dynasty (1368–1644) built an outer Great Wall and an inner Great Wall. The Huanghuacheng section is part of the inner Great Wall that connects the Mutianyu section of the Great Wall in the east, via Jiankou, and Juyong Pass in the west.

Less-Traveled, But More to Do…

Huanghuacheng section is an uncrowded section. You can experience different activities like taking a boat on the lake to appreciate the Great Wall on the surrounding mountains. You can hike around the lake and across the dam instead of climbing the mountains. The Great Wall at Huanghuacheng is surrounded by mountains with verdant vegetation, lots of flowers, and other seasonal beauty. During summer the countryside around Huanghuacheng's Great Wall is swathed in yellow, as masses of wild flowers come into bloom.

The Huanghuacheng wall is divided by reservoirs, and some parts are even immersed in the water, which is a very unique characteristic, distinguishing it from other sections of the Great Wall.

This section's wild wall is pristine, and hasn't been repaired like the Badaling Section. Its stone rebuilt section is not as magnificent as the restored Mutianyu Section, but it retains its original composition from when it was built. And then there's the underwater wall that nowhere else has…

Some stairs are very steep, but you will be satisfied with the achievement and the scenery when you climb to the top.

Accommodation and Restaurants at Huanghuacheng

The nearest restaurants are small local ones in the valley bottom, in villages just outside the tourist area. The nearest hotels are in Changping or half the way from Huairou.

(Because there are reservoirs, it's a "water-source conservation area", so no hotels and restaurants are allowed to be built in the catchment.) While one nearby reservoir is called Huanghuacheng Reservoir, the name of its nearby village is Jintang Village.

The Story of the "Metal Soup Great Wall"

A general named Cai Kai, who led the construction of Huanghuacheng Great Wall, was beheaded after completion of his task, because the emperor mistakenly believed other ministers' lies that his job was sloppy. But when a survey report, stating that the walls were solid, steep, and exemplified the finest workmanship, reached the emperor, the emperor realized that he had misjudged General Cai Kai.

The emperor ordered a tomb and memorial stele to be erected in honor of the loyal general. He also had the characters 金汤 inscribed on the face of a huge rock below. the wall. If you would rather design your own Huanghuacheng tour with our help, tell us your interests and requirements, and China Highlights will tailor-make your Great Wall tour.