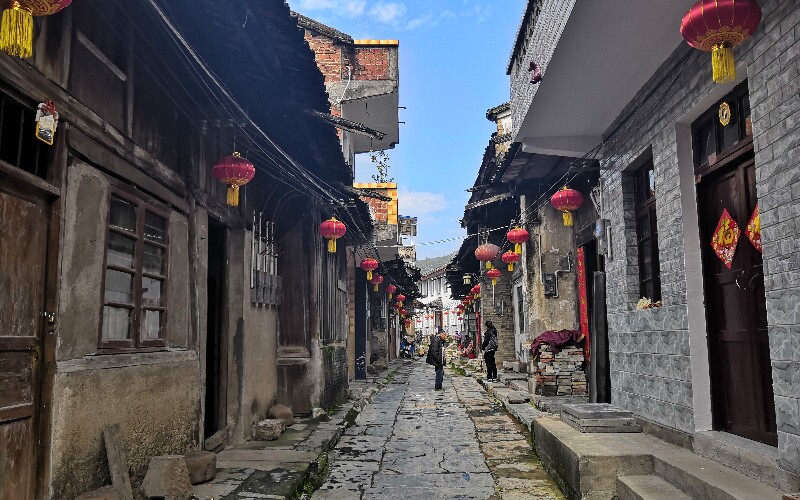 Nestling at the foot of the mountains and by the streams, Xingping Ancient Town boasts of being the most beautiful town along the Li River,

where the cultural relics retain their original appearances, including ancient bridges, pavilions and ferries, and the natural scenery is strikingly breathtaking.

Transportation: a bus from Yangshuo Bus Station will take you there

Daxu Ancient Town was built in 200 AD, and the stone-slate-paved Daxu Old Street stretches 2 kilometers along the Li River, with archaic architectural buildings scattered along the street.

A number of ancient handicraft workshops, such as woven bamboo workshops and straw sandals workshops still remain in Daxu Ancient Town, and the idle residents live a peaceful life, most of whom spend their time playing mah-jong or cards. The buildings of the Ming and Qing dynasties along the streets are brick-structured and have green tiled roofs. Each building is traditionally composed of the main gate, dooryard, main hall, wing rooms and backyard. The arch-shaped Wanshou Bridge was built in the Ming Dynasty, offering spectacular views of the Li River.

Transportation: a bus from Guilin Bus Station will take you there

Jiangtou (江头, ‘River Head’) Ancient Village was listed among the Key Cultural Relics Units under China state protection in May 2006. It is an ideal place for visitors to appreciate China’s historical and cultural atmosphere.

A great number of architectural expressions of the Ming (1368–1644) and Qing (1644–1911) dynasties are well preserved in Jiangtou Ancient Town, including civilian residences, wells, ancestral halls, memorial archways, bridges, temples, and incense halls, which are scattered like a labyrinth. The civilian residences are of an antique flavor, on whose windows are decorated various patterns, such as orchids and bamboo, displaying the profound quaintness of the town.

Transport:Local transportation can take you there but we don’t recommend foreign travelers to use these local vehicles. Travel with us, and we have private car to take you there.

If you decide to use the local vehicles, then consider:

A bus from Guilin Bus Station will take you to Lingchuan (灵川) Town, and then take a motor tricycle to Jiangtou, only 1.5 kilometers (1 mile) from Jiuwu Town (九屋).

Xiushui has lots of original historic residences, stages, memorial archways, and plaques. It is called the ‘Outdoor Ancient Architecture Museum of the Song, Yuan, Ming, and Qing Dynasties’. There are beautiful countryside views around the village, and it is less-touristy.

With over 1,300 years of history, Xiushui Ancient Village has been known for many generations as a village of palace graduates.

In the 13th year of Tang Emperor Li Longji's reign (724 AD), Mao Zhong, then governor of the ancient Ci Prefecture of Zhejiang Province, arrived at what is today's Xiushui Village to conduct an inspection. He was surprised by the beautiful landscape: the mountains and rivers, large farmlands, verdant and luxuriant trees, singing birds, and fragrant flowers, and decided to live there after he retired. His principle of "maintaining family prosperity through plowing and education" was passed down from generation to generation.

Fuchuan County has produced 27 palace graduates; of them, 22 were from Xiushui Village. The most famous of those graduates was Mao Zizhi, who was the best scholar in the imperial exams of the Song Dynasty (960–1279).

Transport: A bus from Yangshuo Bus Station will take you there in about 2½ hours.

With a history of over 1,000 years, Huangyao Ancient Town is surrounded by peaks, where most residences are listed under the surnames of Huang and Yao, hence its name. Huangyao Ancient Town was easy to hold but hard to attack in history owing to its poor transportation, and it remains semi-enclosed now, therefore, the cultural relics in the town have survived men’s destructive influence.

The town is abundant with karst caves, pavilions, temples, ancestral halls, inscribed tablets and ancient trees, through which the Yao River runs, and the streets are paved with black stone slates. The architectural buildings of the Ming and Qing dynasties in the town are arranged according to the Eight Diagram Theory, standing silently witnessing how time passes by.

Transportation: a direct bus from Guilin Bus Station will take you there

Praised as one of the top ten charming Chinese towns, Xing’an Ancient Town refers to a stretch of the Ling Canal in Xing’an County, along which streets, residences, pavilions, towers and bridges are scattered.

With a long history of over 2,200 years, Xing’an Ancient Town is composed of the Ling Canal, Water Street and Qin City. Ling Canal links Xiang River and Li River, and it’s one of the oldest canals in the world. The historical atmosphere is fully shown on Water Street, along which antique buildings are dotted, highlighted by the Horse Neighing Bridge and the Ancient Stage.

Transportation: train 2514 will take you from Guilin to Xing’an; then take a bus from Xing’an Bus Station to the town.