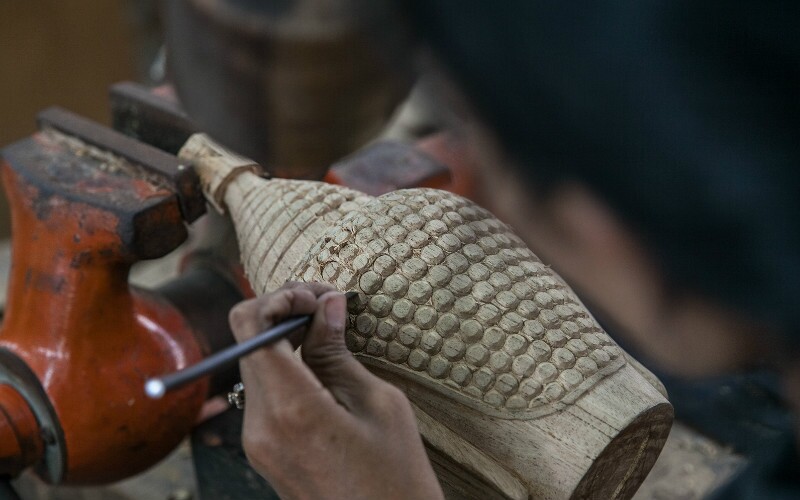 A little way south from the center of Guilin lies one of Guilin's most fascinating, and yet still little-known, true artisan craft industries - woodcarving.

This place is essentially an 'un-touristy' street, an area where artisan wood-craftsmen carve, shape, and create grandiose hardwood pieces.

Perhaps especially because of its ‘untouristy’ nature, it's very much worth an hour or two of any discerning travelers' time - a chance to explore some ‘real’ undiscovered Guilin.

It’s essentially like a living art gallery of the woodcarver’s art at its finest.

Walking along the street you'll see the artisan shopfronts, which display many of their larger works right outside - and large they are!

Reasons to visit the Woodcarvers Street

Some of the woodcarvings are truly huge!

The Woodcarvers Street is a truly memorable visit!

A visit will allow you sights that few visitors to Guilin ever get to see. Guilin’s woodcarver’s street is a genuine treasure trove of truly wonderful artworks, and a magnificent display of true craftsmanship and artistry - breathtaking indeed.

You'll see why within a few yards of walking, as you are greeted by a twelve-foot-high, hand-carved statue of Buddha, virtually the first of these huge testaments to this ancient woodcraft that you come to as you walk down the street.

For as pleasant a place as Guilin City is for any tourist, there's nothing to compare with what you see here, either downtown or in the immediate city surroundings - or, for that matter, in many other places in the world - with the magnificence of the craftsmanship and uniqueness of the  artwork.

The Art of Chinese Woodcarving

Many of the carvings are well over head height, and there are many massive-scale carvings of various animals specific to Chinese culture, a complete tree showing the origins of the Silk Road, not to mention several larger-than-life ‘living museums’ depicting famous episodes from China’s history. (These would probably be destined for an actual museum or possibly some public space.)

Classical woodcarving artisans begin a work by choosing the trunk of a particular tree, or a whole block of wood, which is then cut into a regular. Then various carving tools are used to sculpt artistic forms, pictures and figures, either in bas-relief or fully in three-dimensions.

China to Chippendale - It's a Fact!

Thomas Chippendale himself was said to have been inspired by the techniques and craftsmanship of Chinese artisans working in this style.

Chippendale of course is still widely renowned for the fineness of his work as a furniture craftsman, as well as an interior designer whose works now command great prices. Chippendales' work is to this day regarded amongst the finest of antique desirables.

There are ‘burls’, often formed on the trunks and root systems, which are known as ying wood or yingzi from a variety of trees that are used for the creation of both figurines and standalone sculptures. These can come from any kind of wood, but burls from Phoebe trees are the most prized.

Phoebe Zhennan is a large species of tree which grows up to 30 meters (98 ft) tall. It is one of the Lauraceae family. Zhennan was originally a Chinese word that related to its Chinese name 楠 (nan).

Phoebe trees are endemic to China where they occur in Guizhou, Hubei, and Sichuan provinces. Now threatened by habitat loss, the species is under second-class national protection in China. They were considered so valuable that only royal families could afford to use them.

Most often, it is hardwoods that are chosen for their stability and density, which also makes them difficult to carve. Some aromatic woods such as the Tung tree are also used.

Woods of various colors are used.

Red sandalwood, or zitan (紫檀, or Pterocarpus santalinus) is a slow growing tree and also quite rare, and so furniture made from red sandalwood is difficult to find and can be expensive. It has been one of the most prized woods for millennia. You’ll find quite a bit of it down here!

Red sandalwood has historically been valued in China, particularly during the Qing Dynasty (1644–1912). An exquisite chair made of red sandalwood can be seen today in China's Forbidden City in Beijing, inside the Hall of Supreme Harmony, and once used by Qing emperors.

Teak is also used. Teak has a high oil content, and has high tensile strength and its tight grain makes it particularly suitable where weather resistance is desired. Though comparatively easy to work, it can cause severe blunting on edged tools because of the presence of silica in the wood.

The whole length of the street has numerous ‘showrooms’ which openly display exquisite and larger-than-life carved statues and artworks outside their frontages, and they house many more of their carvings inside. So it's all quite simple!

Walking around them is like being in an Aladdin’s' cave of exquisitely carved treasure!

Taking a peek down one of the alleyways or around the bends at the end of the main street you'll see various yards strewn with seemingly useless and certainly unattractive tree stumps, trunks and wood cuts of varying descriptions, none of which would appear to be destined for greatness.

It is from these seemingly colorless, shapeless hunks that the woodcarvers of Guilin create their amazing carved statues, frescoes and also indeed, furniture of varying types.

Many of the carvings are unforgettable, and well over three meters high - the sheer scale is amazing - there are lions, dragons, bulls, elephants and even a camel, not to mention some truly epic carved statues of the Buddha, Lao Tse (Laozi in Chinese), and Confucius.

Prices of the Woodcarvings

A lion woodcarving and tea table

It is interesting to note that whole logs of Phoebe Zhennan wood were used in the construction of the Forbidden City. Their value increases even more when they are semi-fossilized and become ‘black wood’ (乌木 wumu), the market price (as listed in 2012) could be as high as over $10,000 per cubic meter.

The artistry and craftwork you will find here is usually better known for being carried out in other areas and cities in China, such as Dongyang Township in Zhejiang Province and Sanyi Township in Taiwan, but right here in Guilin it's clear to see that Guilin is also a great epicenter of this ancient yet timeless art form.

Many people here are only too happy to chat and explain things to interested parties, though a guide would be recommended in terms of translating, if you might need to inquire more deeply, or indeed, to make a purchase!

Woodcarving of a maned lioness (hence cub), probably substituting a stone lion for in front of a building.

There are 'regular' shops and stalls along the street selling Chinese street foods, noodles, and fruit if a snack or drink is required in the immediate vicinity.

Take Your First Steps Towards a Deeper Guilin Experience

You could start from our most oft-chosen Guilin itinerary choices:

There's so much to see and do - you may want to stay longer... Let us know your interests for a quote on a tailor-made deeper Guilin tour.

Guilin is 72-hour visa free for travelers with an international flight transit in Guilin. See more on Guilin Visa-Free Travel - How to Make the Most of It.