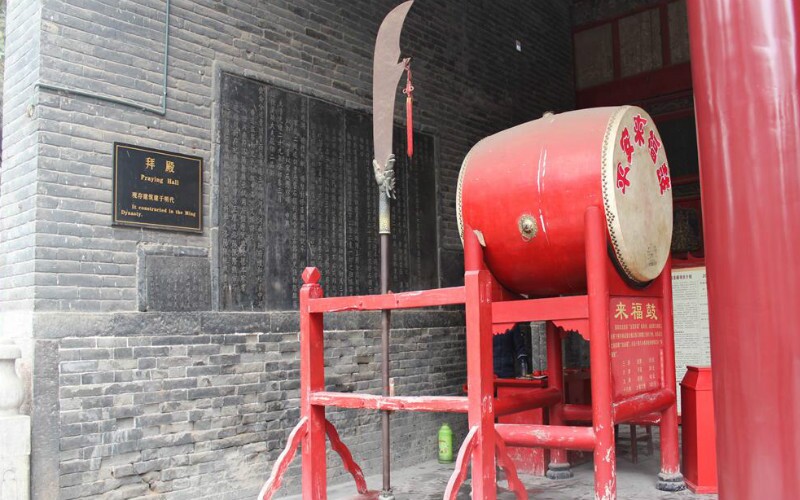 Guanlin Temple was built to commemorate the great General Guan Yu of the State of Shu during the Three Kingdoms Period. It is said that the head of General Guan Yu was buried here. Furthermore, it is the only complex combining a forest with a temple in China.

The structure is now comprised of halls, temples, pavilions and Guan Yu's tomb. Valuable stone tablets with elegant calligraphies can also be found here. The place is very popular among the locals who worship the valorous general by burning sticks of incense.

In the "Romance of the Three Kingdoms", the Shu general, Guan Yu, was defeated, captured and executed by Sunquan, the ruler of the State of Wu. Fearing revenge from Guan Yu's blood brother, Liubei, who was the ruler of the State of Shu, Sunquan ordered that Guan Yu’s head be sent to Cao Cao, ruler of Wei, in an attempt to deflect responsibility for the death. Cao Cao, however, was an admirer of Guan's loyalty and bravery. He ordered a wooden body to be carved to accompany the head before Guan Yu was buried.

Very little is known about when the temple was first built. The complex was developed during the Ming Dynasty and underwent several renovations and expansions during the succeeding Qing Dynasty.

The First and Second Hall

In the First and Second Hall of the Guanlin Temple, the statues of General Guan Yu are standing in the middle of the halls. There are twelve wooden carvings on the walls in the First Hall, telling the story of what happened in the "Romance of the Three Kingdoms". In the Second Hall, the statues of Guan Yu reading the book and sleeping express people's respect and care for him.

Because Guan Yu often stayed up nights reading the book "Chunqiu", Cao Cao asked construction workers to build this hall for him. In this hall, a statue of Guan Yu on the left is reading the book. People praised him as an almighty general in that he could compose and perform military exercises.

Stone Lane is 10 meters high and 6 meters wide. The characters on the lane were written to commemorate Guan Yu.

Before the tomb, there is a stone tablet which was built in the Qing Dynasty, carved with the highest of inscriptions of Guan Yu by many emperors.