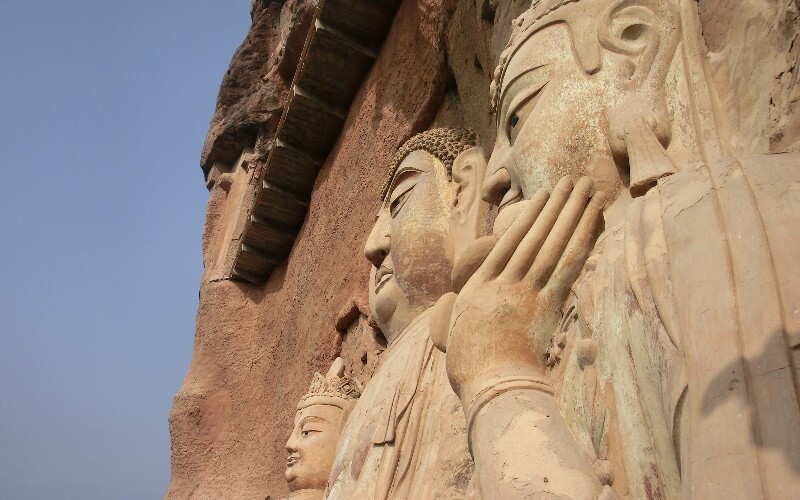 Along the Silk Road, there are many cultural relics that attract many visitors, especially the religious grottoes. In ancient times, Buddhists made caves on remote mountains into shrines filled with carvings, sculptures and other religious art to practice their religion. These caves were developed as places for Buddhist pilgrimage.

The caves have witnessed the development of the Silk Road. The elegant statues and fantastic mural paintings show you the high level of art in ancient China. Here we have listed the eight most famous Buddhist cave complexes along the Silk Road by order of importance.

The Longmen Grottoes enjoy a good location where two mountains (Mount Xiang and Mount Longmen) confront each other and the Yi River flows between them. Spanning a length of about 1 kilometer on a hillside along the river, the niches resemble dozens of honeycombs dotting the area.

The grand scale of the stone carvings is magnificent. The Longmen Caves, as they are also called, are of great value to the history of world sculpture.

The Yungang Grottoes, with 252 caves and 51,000 Buddhist statues, are examples of classical masterpieces of Chinese Buddhist art from the 5th and 6th centuries.

The whole grotto complex is magnificent with delicate carvings. It extends for about 1 kilometer (0.6 miles) from east to west. The statues are precious and vivid, representing the development of art, architecture, music, and religion at the time of construction.

Caves 5 and 6 are the highlights of the Yungang Grottoes. There is a 17-meter-tall Buddhist statue in the fifth cave. Inside the sixth cave, there are precious sculptures depicting the story of Shakyamuni.

Dunhuang's Mogao Caves, or Mogao Grottoes, lie in the steep cliff of Mingsha Mountain, which is located in a desert.

There are 492 caves, 2,000 statues, and 45,000 square meters of mural paintings. The Mogao Caves are most famous for the mural paintings of Buddha and flying apsaras as well as sutra illustrations. You will be impressed by the vivid and beautiful paintings.

To protect the mural paintings and statues, only a few caves are open to the public, and photography is not allowed inside the caves. The tickets are limited to 6,000 visits per day. The scenic area has developed new techniques for visitors to see the caves and paintings via high-definition videos and ball screen cinemas.

No matter whether you are in a group tour, an independent traveler, or in a private tour, you will need to be in a group that is led by the scenic area's staff. Different tour groups will visit different caves, but the must-see caves will be included in the visit.

There are 42 caves with 250 colored statues and about 5,000 square meters of mural paintings. The artistic skills and painting compositions in the Yulin Caves are similar to those in Dunhuang's Mogao Caves.

The sixth cave's Maitreya Buddha is 25 meters high and is covered with gold foil, making it look very majestic. The 11th cave's Eighteen Arhats have vivid faces and poses.

The caves are carved into a cliff of an isolated peak. The visiting route is via a steep stairway on the cliff, which is quite breathtaking but is safely reinforced with cement.

There are 221 caves, 10,632 clay sculptures, and more than 1,300 square meters of mural paintings. The Maijishan Grottoes are famous for their clay sculptures. The tallest clay sculpture reaches 16 meters in height.

Sculptures in the Maijishan Grottoes look so similar to ordinary people that some sculptures even appear to smile at people.

To protect the caves, visitors are separated from the caves by iron gauze and the number of tickets sold are restricted to 6,400 tickets per day.

The Bingling Temple, also known as the Bingling Thousand Buddha Caves, is on a cliff at the side of the Yellow River. This means you will need to take a boat trip to reach the caves. You can enjoy seeing the Danxia landform alongside the river.

Unlike the construction of other caves, most parts of the Bingling Thousand Buddha Caves consist of niches. There are 183 caves and niches in total, with 694 stone sculptures and 82 clay statues. The beautiful mural paintings spread out across the 60-meter-high cliff for 200 meters.

The site has one of the biggest surviving carved statues of Buddha in China, hailing from the Tang Dynasty era (618–907). The statue measures about 27 meters, or 89 feet, tall. It is similar to bigger giant statues that were built about 250 years earlier in Central Asia, showing the cultural link with the region.

You can take photos and see the paintings up close in the ordinary caves and niches; however, you are not allowed to take photos in the special ones.

Mati Temple Grottoes consist of five parts: North Temple, South Temple, Thousand Buddha Cave, Golden Pagoda Temple, and Upper/Middle/Lower Avalokitesvara Caves. There is an interesting legend that a horse from heaven once left a mark from its hoof there, so the place was named Mati Temple (mati means 'horse's hoof'). Visitors can still see the horse's hoof in the Mati Hall inside Puguang Temple.

The landmark of Mati Temple Grottoes is the Thirty-Three Heavens Cave in the North Temple area. You need to walk inside the rocks on a narrow pathway to get from one cave to another.

There are 83 caves, but only 40 of them have retained mural paintings and these cover a total area of 1,200 square meters. Not all of the caves are open to the public but you will have the chance to go into dozens of them to see the relics inside.

The 33rd cave is the most famous cave with a painting of the Buddha's nirvana. The highlight of the painting is the Buddha's disciples' different expressions, such as being happy or sad.

Most of the Bezeklik Thousand Buddha Caves were badly destroyed, including the eyes of figures having been dug out. Many paintings fell off the walls and you can only see part of them. Only with the surviving paintings can you imagine how fantastic the caves looked before.

Walk Along the Silk Road and Visit the Caves with Us

Traveling along the Silk Road is a rich cultural journey into the heart of China, and we can provide what you need for a comfortable, enjoyable, and worry-free experience designed to suit you.

If you are interested in visiting the caves on the Silk Road, why not have a look at our itineraries below for inspiration? Our tours can be customized and are flexible.