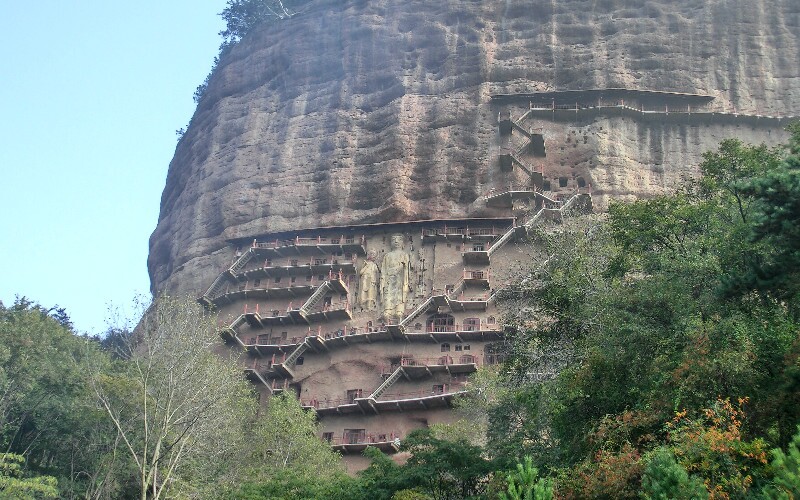 The Maijishan Grottoes, together with the Dunhuang Mogao Grottoes, Luoyang Longmen Grottoes, and Datong Yungang Grottoes, are called “the Four Great Grottoes” in China.

If the Mogao Caves are considered a large mural museum, the Maijishan Caves are undoubtedly a large sculpture museum. There are 10,632 clay sculptures in Maijishan and it is praised as “the Oriental Sculpture Art Exhibition Hall”.

Like the Parthenon temple in ancient Greece, the stone and clay carvings in Maijishan have been well-preserved since ancient times, so the Maijishan Grottoes are also called “China’s Parthenon Temple”.

Highlights of the Maijishan Grottoes

The Maijishan Grottoes were excavated into Maiji Mountain. The mountain is 150 meters (490 feet) tall, and it was named for its shape — like that of a pile of wheat.

According to historical records, the Maiji Grottoes were excavated during the Latter Qin Dynasty (384–417 AD) of the Sixteen Kingdoms Period. There are 194 caves in Maijishan, carved in different dynasties with different characteristics of the times. However, unlike the exotic sculptures in Mogao Caves, the sculptures in Maijishan Caves are more secularized, human, and more Chinese.

Sculptor N. Klinduhov of the former Soviet Union once said excitedly after visiting the Maiji Grottoes, "The sculptures of the Northern Wei Dynasty and Song Dynasty are the most fascinating to me. They have an amazing inner world, and their compositions and forms are expressive."

Cave 133 is also known as “Ten Thousand Buddhas Cave” as it has the most Buddha scultures of any one cave in the Maijishan grottoes.

You will be impressed by a small monk among these numerous sculptures. The statue is simple, with a sweet smile on his mouth. The smile can still move us deeply after a thousand years, and it seems that we can still dialogue with him.

Why does he smile happily? Is it because he remembers something amusing? Or has he just been praised by his master? Maybe this question has been asked for more than a thousand years and might be asked for another thousand.

This little monk not only brings the charm of history to life, but also shows a smile from the ancient East to the modern world.

There are one incarnation of Buddha, two Bodhisattvas, and one disciple in Cave 44. The Buddha's face is goose-egg shaped, full of muscles. Her eyes are long and slender, and the corners of her mouth are slightly embedded. She looks down slightly with a kind smile. She shows not only the mercy of the Buddha, but also the kindness and love of a mother. She is praised as “the Eastern Mona Lisa”.

We can see the smile on her face, but what we cannot see is the beautiful and sad story behind her smile...

It is said that this Buddha statue was created to commemorate the Queen Yifu of the West Wei Dynasty (535–556). She was the first beautiful queen in dynastic Chinese history. For the nation’s stability, she was forced to become a nun in Maiji Mountain. Even more pitiful, she was finally executed by the weak emperor, because the new queen could not stand that there were two queens in the country.

This is the sad love story behind the smile, attracting countless tourists from ancient times to the present.

Excavated high in the face of Maiji Mountain, about 70 meters (230 feet) from the ground, the Cave 4 is its largest and most famous cave. It is called Seven-Buddha Pavilion and it has the most splendid hall.

The cave is also called “the Sprinkling Flower Tower” because of a Buddhist story. It is said that the Bodhisattva tested his disciples by sprinkling flowers from there, and the flowers would fall onto a disciple if he was not a sincere Buddhist. You can try to drop a flower when you are there and see if it lands on anyone (insincere).

Besides the above three caves in Maiji Mountain, Cave 127 is the most complete cave with the most murals of Buddhist stories and paintings, which are the largest and oldest existing ones in China.

The frock patterns of statues in Cave 78 and Cave 128 were carved with vivid detail.

All these should not be missed in a Maiji Grottoes trip.

The Best Time to Go

The Maijishan Grottoes are part of the Maiji Mountain Scenic Reserve area (also including Xianren (‘Fairy’) Cliff, Shimen, Quxi, and Jieting Hot Spring), which has forests and a large variety of plants and animals.

The Maijishan Grottoes can be visited all year around. However, the best time to visit the Maiji Mountain Scenic Reserve area is from July to October.

In Summer (July to August), Maiji Mountain, covered by dense foliage, is a good place for a summer vacation. Autumn (September to October) is the best time to see the colorful leaves on the mountain.

The Maijishan Grottoes are 45 kilometers (28 miles) from Tianshui city, Gansu Province. Tourism buses, taxis, or private transport make the journey in under an hour.

You can take a high-speed train from Lanzhou, Xi’an, Jiayuguan, and Zhangye to Tianshui Nan (‘South’) Railway Station. Or you can take a flight from Tianjin, Nanjing, Hangzhou, Chongqing, or Xi’an to Tianshui Maijishan Airport.

Usually half a day is suggested to visit the Maijishan Grottoes. Travelers can take the bullet train from Xi’an or Lanzhou to Tianshui in the morning. It takes about 1½–2 hours.

We would be more than willing to customize a Maijishan Grottoes trip based on your special requirements.

The Maijishan Grottoes and the Mogao Grottoes are both in Gansu Province on the Silk Road, and you may wonder which one to see on a Silk Road trip. Though they are both grottoes, they are different, so you might want to see both.

The breathtaking Maiji Caves are carved into the steep cliff of Maiji Mountain, which rises to about 100 meters (330 feet) above the ground. It contains two parts: the East Cliff and the West Cliff. The caves are "as dense as honeycombs in hives" and connected by plank walkways hanging in the air, suspended from the cliff face.

Have you ever thought how that was done more than a thousand years ago without modern machinery?

It is said that the Maijishan Grottoes were excavated at the cost of cutting down all the woods near Maiji Mountian. The people of old built wooden scaffolds from the foot of the mountain to the top, and these scaffolds were the precursors to the “plank roads” of later generations.

In the Tang Dynasty (618–907), Maiji Mountain was divided into two cliffs, east and west, by an earthquake. During the following Song, Yuan, Ming, and Qing dynasties, the Maijishan Grottoes were developed and gradually formed the totality that we see today.

The Maijishan Caves are the crystallization of human wisdom and art on the Silk Road, and they also represent an infinite respect for Buddhism and limitless yearning for a better life.