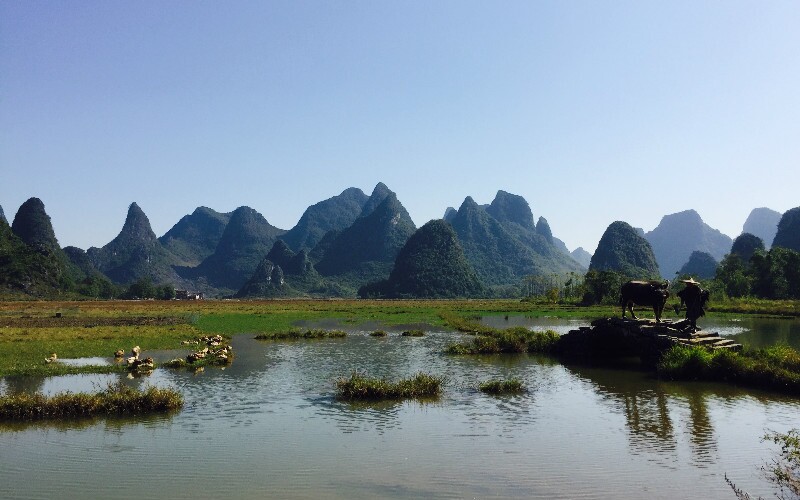 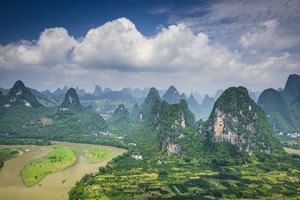 The South China Karst is so impressive and is such an important part of China that it is World Heritage listed. It covers half a million square kilometers (193,000 square miles) of southern and central China.

There are many parks protecting these eroded limestone formations in the southeast, south, and northwest of China. They range from watery green terrain to otherworldly rocky outcroppings, and they are beautiful places for recreation, hiking, and sightseeing.

World Heritage listing in 2007 and 2014: Recognizing the beauty and unusual geology of the karst rock formations and their importance for China's ecology and economy, four park areas in southern China were declared World Heritages by UNESCO in 2014. These are: Guilin Karst and Huanjiang Karst (Guangxi Province), Shibing Karst (Guizhou Province), and Jinfoshan (Chongqing).

Limestone covers 12% of the earth's land surface, so karst isn't a rare geological feature. But China's limestone landscapes are uniquely big and unusually interesting. They helped to define what Chinese consider to be beautiful natural landscapes. Many of the famous paintings of the Ming and Qing era were of these weathered hills.Karst is limestone that has been eroded by dissolving in rain water and runoff, forming steep peaks and caves.

Guilin Karst — Splendid Scenery that Is Easy to Enjoy by Boat 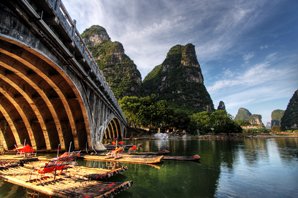 The Li River's scenery is easy to see by tour boat. It is noted for the moodily sculpted hills and green landscape. It is the most popular karst scenic region in China.

Guilin's karst country is extensive, and the weathered hills fill the countryside all around the city, around Yangshuo, and areas north and south of Guilin. Yangshuo is a popular tourist town about an hour away by road. But most of the rugged countryside's karst outcroppings are difficult to access.

People can hike and ride bikes around Yangshuo and its countryside. Several caves are popular such as Reed Flute Cave.

The area is noted for its sheer beauty, and the karst is acclaimed around the world. It is best to visit in the summer and early fall when you can enjoy rafting and swimming in the rivers. See our popular 3-Day Li River Highlights Tour. It is easily modifiable, and you can tell us what you want to do and see.

The Swords at The Stone Forest 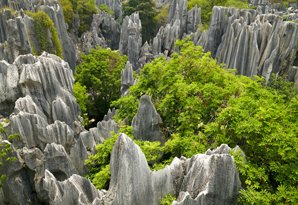 It is only 99 kilometer meters by road from Kunming and enjoys the same comfortable climate as the city. This is an excellent place for photography since the weather and time of day changes the shadows and color of the rocks. Many tourists enjoy a tour of the Kunming area.

Wulong is in Chongqing. It isn't in the city itself, but it is about two and a half hours away from the huge municipality. Well-known scenic spots in Wulong County include Furong Cave, the biggest group of natural bridges in Asia, and Houping Tiankeng that is a huge pit made by the collapse of a huge cave.

Like the Li River in Guilin, tourists enjoy riding cruise boats or rafts there and seeing the fantastic scenery. It is a good area for hiking and ecotourism. 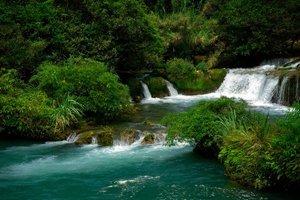 Libo in Guizhou has spires shaped like cones instead of needles or swords as at The Stone Forest. The Libo karst is in a forest that is considered to be one of China's most beautiful. The fantastic limestone forms shoot up in front of you out of the trees while hiking through the park.

There are several ethnic villages and towns of Buyi, Shui, Miao, and Yi people that you can visit during a hike or tour of the area also. The Maolan National Nature Reserve protects a 20,000 hectares area reserve and has a rich variety of plant and animal life.