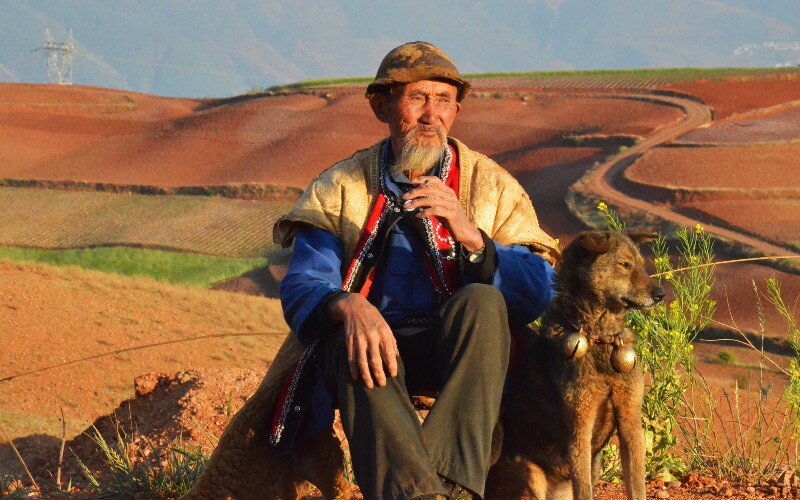 The 7 Most Spectacular Landscapes in China for Photographers

China's vast land area gifts the country with many spectacular landforms, which formed millions of years ago. These natural wonders could be the inspiration of your photography or simply a visual feast for your eyes.

1. Land of the "Red Flame" – the Red Land of Dongchuan, Yunnan

Dongchuan Red Land is about a four-hour drive southwest from Kunming City. Some sections of the road pass mountainous areas, so you'd better prepare for possible carsickness.

If you plan to take photos of the sunrise in the red land, you might want to spend a night in an economical family hotel near the red land, but prepare for basic conditions there. Or you will need to get up very early, because the red land is about a 1½-hour drive from Dongchuan Town, where there are star-rated hotels.

Best times to travel and photography tips: The suitable period for visiting the red land can be long as from May to December. However, the best months for taking photos are

The land is extremely red after rain. It is located in a mountainous area, with lower temperatures and windy weather, so prepare warm clothes.

Travelers who have visited the Li River might have found that even a common photo of the Li River can be made into an elegant postcard.

The Li River Scenic Area is renowned for its karst landforms, limestone cones, cylinders, and hills, which have inspired countless Chinese poets and artists, and have been repeatedly depicted on the country's newspaper and magazine currently.

Taking a cruise on the Li River in early summer, when the weather is not so hot, you can have more enjoyment of the river, when its limestone hills are decorated with fresh green plants.

The dock for boarding a Li River cruise is quite near Guilin City. The whole journey is 55 kilometers long, passing various colorfully named peaks and shoals, Crown Cave, Yangdi Village, and Xingping Town, and disembarking at Yangshuo Town (another Guilin highlight with graceful idyllic landscapes).

You can also check out other Guilin's attractions.

Some years ago, an ordinary farmer's photo of the landform brought this hidden magnificent sight to light, and soon it became a base of the Gansu Photographers Association.

The Zhangye Danxia Landform formed 600 million years ago, covers an area of more than 510 square kilometers. It looks like a oil painting when the vast red rock formations is simply set against pure blue skies.

Best times to travel: September and October are the best two months to visit Zhangye Danxia Landform. The sunrise and the sunset glow are very spectacular.

4. The Red Wave of China

Many Americans have heard of the Wave of Arizona. China also has this kind of phenomenon - the Wave of Jingbian Prefecture (靖边县), northwestern Shaanxi Province, about 450km from Xi'an City. Different from the white and red waves in Arizon, the Wave of China is mainly red (which is fitting considering China's flag).

The Wave is formed in sandstone with peculiar shape and "grain". It is said that the formation of the Wave started in the Jurassic Period, carved by millions of years of wind and rain.

The Wave of China is an undeveloped attraction, so the locals of nearby villages are quite simple and unsophisticated, and there are few facilities there (such as accommodation, restaurants, and shopping places). The Wave of China is about 1.5 kilometers from a small town (Longzhou). This 1.5-kilometer road is a basic unsurfaced road, so prepare for a bumpy ride.

The Colorful Bank is situated on the way to Kanas Lake Scenic Area (where there is one of the most beautiful ancient villages with graceful autumn scenery). The Colorful Bank is by the Irtysh River, facing the valley with verdant trees on the opposite bank.

The Colorful Bank (the north bank) is cliffs exhibiting Yardang landforms, rolling and splendid. Millions of years' geological processes have carved the rocks on the bank into peculiar shapes: castles, towers, canyons, and ravines. Nature has painted these rocks red, yellow, purple, and blue.

Kanbula National Forest Park is well-known for its Danxia landforms, with peculiar shapes including square hills, pillars, towers, and castles. The hills there are bright with red or brown colors.

It combines amazing natural scenery, Tibetan Buddhist culture, and a modern hydropower station. Nanzong Temple, a Tibetan temple with more than 1,000 years of history, is located in the park. Besides Tibetan villages, there are seven Mongolian villages in Kanbula area.

Photography tips: The most colorful months in the park are June and July (when wild flowers are blossoming), and September (when the park is decorated with its colorful "autumn coat").

7. The "Soil" Forest in Yuanmou, Yunnan

Kunming has a famous stone forest, but the Soil Forest in Yuanmou is also worth a visit.

The Soil Forest consists of pillars (generally 8 –25m high, and the highest one is 43m) of soil-like material, which record the progress of palaeogeographic transition and landform evolution. The tops are red-brown, and below is yellow, mixed with gray and white.

Transportation: The Soil Forest is located in Yuanmou County, Chuxiong Yi Autonomous Prefecture, about 219 kilometers north from Kunming City. You can take a train or a coach from Kunming. The road conditions are basic and winding, so prepare for possible motion sickness.

Photography tips and best time to travel: The sunrise and the sunset there str quite splendid. The best period for visiting is September – April, when there are usually pure blue skies and white clouds. Recommended visiting duration is two days: to appreciate the sunset on the first evening, and enjoy the sunrise on the follow morning.

See China's Spectacular Landforms for Yourself

If you are interested in the spectacular landforms in China, please see our popular photography tours below for inspiration:

Not interested in the above tours? You can contact us to have us design a tailor-made tour , which will allow you to see these magnificent landforms and to visit your other favorite attractions in China.