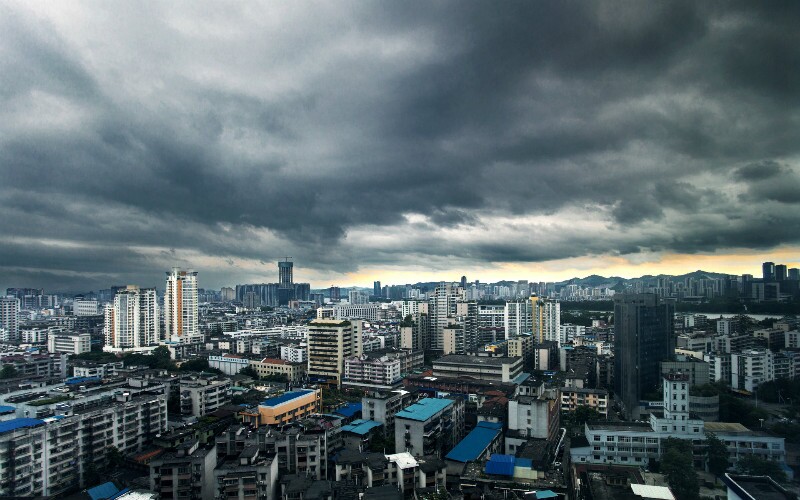 Typhoons hit China more often than any other country in Asia. On the average, about 7 or 8 land each year. The Shanghai region is so large, densely-populated, and low-lying that if a strong typhoon ever hit the city, there could be great devastation. The Pearl River Delta area is considered by specialists to be in even greater risk of storm surge, flooding and damaging high winds from a typhoon.

Since 2015 and 2016 has an unusually strong El Nino weather pattern, there has been an unusual number of strong typhoons landing in or coming near China, and many more are expected through 2016. Here is information about the high, medium, and low risk areas of China for typhoons along with traveler's tips about what to do in case a strong typhoon hits.

This might be surprising to people, but of all the metropolitan regions in the world, the Swiss Re's insurance company ranks Shanghai as 8th riskiest and the Pearl River Delta 3rd riskiest for major natural disaster in the whole world. Some other cities in the world face earthquakes, but China's coastal cities are mainly endangered by typhoons.

There is little danger for tourists overall though because the chance of a direct hit each year in these cities is low. However, it isn't known whether Shanghai or the Pearl River region is well prepared for a direct hit of a strong typhoon because there hasn't been a direct hit for decades.

Duration and severity: Storm winds usually only last a few hours unless the eye passes nearby. Then high winds may last for about 8 hours. Shanghai is built on the alluvial plain of the Yangtze River, and it is an unusually flat and low lying megacity of 25 million people. The average elevation is only four meters including some hills. Most of the city is less than two meters (6 feet) above sea level. The famous Pudong central business district is at an elevation of about one meter. The main problems would be a high storm surge and/or heavy rainfall that could flood most of Shanghai.

Tianjin is built in the Hai River Delta. In the low risk region north of Jiangsu Province, it stands out as a uniquely endangered big city according to Swiss Re's. The elevation ranges from two to five meters in most of the city which makes the city vulnerable to a typhoon storm surge.

The further north in China, the less of a chance of a typhoon, and the later in the year a typhoon is likely to land. Since the 1970s, there have been many less typhoons in Guangdong than previously. There has been a shift in the path of typhoons northwards, and the strength of typhoons may be increasing.

El Nino 2015 to 2016: An unusually strong El Nino developed in 2015 that has been breaking records. The record number of ten Category 5 typhoons set in 1997 may be broken in 2015. Unusually many strong typhoons have been developing and landing in China this year.

A 50-year record for super typhoons may be set in 2015, and meteorologists are predicting that 2016 may be warmer than 2015 since the El Nino is still developing. If this happens, then more and stronger typhoons or other destructive storms may arrive then.

In Shanghai and Guangzhou, if a typhoon approaches, there are four warning signals that are broadcast for the public: Shenzhen has a new warning system that is basically like Shanghai's. The main difference is that there is an additional initial signal white that is posted if a storm might hit the city within 48 hours. White is the lowest warning signal. Schools may close if a signal yellow is issued.

There are five signals that are broadcast for the public in case of a typhoon. There are no signals in between these such as 2 or 5 or numbers other than the five signals below.

Of the two cities, Macau is more in endanger of destruction if a typhoon hits since much of it, such as the Cotai Strip, is at a low elevation. See more Hong Kong typhoon information and our Traveler's Tips.

The Four Risk Zones for Typhoons

Inland dissipation: In general, a typhoon loses about 60% or 70% of its strength when it travels about 100 miles (160 kilometers) inland. For example, a medium-strength Category 3 typhoon (winds 110 mph) downgrades to a tropical storm with winds of about 39 mph (60 kph) about 100 miles inland. So regions that are more than 160 kilometers away from the coast are generally safe from typhoon destruction unless it is located on a big river where heavy rains might cause flooding. Historically, in the last century, Guangdong received about 1/3 about all of China's typhoons, but the path of typhoons has shifted northwards in the last 15 years. There are two areas of main risk. One is the Xi River area of Zhuhai. The other is the Pearl River area and the Shiziyang (獅子洋) tidal straight and delta. The river flows down to Shiziyang straight that is between Dongguan on the east and the Panyu and Nansha areas of Guangzhou on the west. These are densely populated metropolitan areas most at risk for a serious flood. Swiss Re calculated that a flood would occur more than twice per century.

Flooding risk: Most of Guangzhou and Shenzhen is expected to be little affected by a severe flood. But the Yantian District of Shenzhen is on the Pacific facing coast, and it may experience a storm surge. Hong Kong is rarely affected by flooding according to Swiss Re's calculations. Most of Hong Kong is at high enough elevation to protect from storm surge or flood, and the major urban districts are protected by the topography of Victoria Harbor.

High winds: In the whole Pearl River area, Hong Kong and Macau, the destructive winds from a direct hit by a strong Category 5 typhoon is a danger.

Typhoon hits on Hong Kong are rare: Since 1987 there has only been one typhoon to hit the city. There was also a near miss in 2012. The beach in Hainan Province

Highest number of typhoons annually: Hainan and Zhanjiang peninsula north of it stand out as the area along the southern coast that receives almost 1 typhoon a year since 1950.

The typhoon struck during China's National Day holidays, and tens of thousands of tourists were in Hainan at the time. It disrupted bullet train service on the island and flights to the island, but there was little or no damage to the island's beaches and hotels. This typhoon shared the same name as a tropical storm that landed in Hainan in 2009.

September and October are the most likely months for a typhoon. The end of July to early November is Shanghai's typhoon season. Shanghai's climate and weather forecast>> Recent typhoons: Though the topology puts the area of the Yangtze River in danger, typhoons land less often than the southern area. Only three typhoons have landed within 200 miles of Shanghai in 35 years. In 1997, a typhoon of category 1 (137 kph or 85 mph winds) landed 180 miles (289 kilometers) from Shanghai and 240 people died.

Yangtze River basin: For about two hundred or three hundred kilometers inland from the coast, the Yangtze River area is flood prone. This area include Suzhou and Nanjing. A major typhoon might flood the region.

Recent Major Typhoons in the Region

Chan-hom: because of a strong El Nino, typhoons have been unusually active in 2015. On July 11, 2015, a category 2 typhoon with winds of about 100 mph (160 kph) called Chan-hom landed at Zhoushan City that is about 155 kilometers or 96 miles from Shanghai. Wind speeds at Shanghai's Pudong Airport were low with a peak gust of 96 kph or 56 mph. In preparation for this storm, more than a million people were evacuated from coastal areas and bullet trains and flights were cancelled.

These northern areas of China only receive a typhoon every 10 years or so. Compared with the areas southwards where many cities face some danger from storm surge, only the Tianjin area in the whole region faces a significant risk. The Forbidden City in Beijing

The rest of China including the popular tourist cities of Guilin and Kunming face almost no danger from typhoons. The major exceptions are Wuhan and to a lesser extent Beijing.

Pack your bag and come with us to explore the beauty of China's coasts. Below are popular tours for your inspiration that you can modify.

If typhoons are forecast to affect your trip, your China Highlights travel adviser can change your itinerary to make sure your tour won't be affected. If already in an affected area, our tour guides also have the flexibility to take you to visit places indoors instead. We suggest you don’t go to isolated or remote places if a typhoon is forecast.