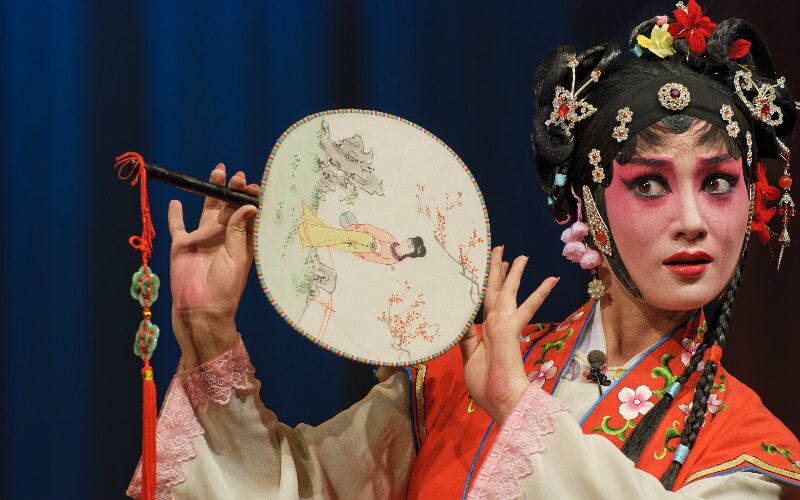 A wealthy family in Deng-Zhou was marrying off the daughter, Xue Xiang-Lin. To ensure the daughter would never be in need, the parents prepared a lot of properties with the daughter. A local tradition was to have a large purse, called "unicorn-trapping purse", to accompany the bride, hoping that she would have powerful and promising sons. Miss Xue was in a sad mood for she would leave her mother soon. And the mother filled the purse with jewlaries to make her daughter happy.

A sedan chair carried the bride to her husband's home. On their way, it suddenly began to rain. The group went to the nearby Chun-Qiu Pagoda to avoid the rain. At the same time, there was another sedan chair and the accompanying people coming in the pagoda. The other bride, Zhao Shou-Zhen, turned to be from a poor family and so was her husband. During the stay in the pagoda, Miss Xue's maiden, Mei-Xiang, said some words that hurted the poor girl. And Miss Zhao knew she would face a hard life and the maiden's words made her began to sob. Miss Xue heared the sobing. The sedan chair had a round curtain and the bride usually did not see what outside world was. Now Miss Xue took a look outside and she asked her maiden to check what was going on. The maiden did not like to go to talk to the poor girl. Miss Xue got very angry and instead she asked a servant, Xue Liang, to see what was going on. When the servant informed her why the poor girl was crying, Miss Xue wanted to help her. Both of them were sad, for the poor girl because of her poverty and for Miss Xue because of her getting everything. But sitting in the sedan chair, Miss Xue had nothing handy but her jewlary purse. So showing her ladyness and generous, Miss Xue gave Miss Zhao her purse without revealing her name.

Six years passed. Miss Xue had lived happyly with her husband. They had got a son and the son was now 5 years old and was very like what she had been in her childhood. One day, they went to visit her parents. Then there suddenly was a flood which washed all the family's properties away. To escape the flood, the family was scattered. Miss Xue, accompanied by her life-time nanny only, escaped to Lai-Zhou and did not know where her husband, son and mother were. Her nanny luckyly got her a bowl of rice from a local relief site. She was very hungry but the food was in anyway not a comparable to what she used to have. So when someone asked for it she gave it him.

The nanny heard that a rich family, surnamed Lu, was looking for a young nanny for their son. Miss Xue was encouraged by her nanny to be interviewed. Miss Xue was then hired. The boy, Lu Tian-Lin, was making requirements just like Miss Xue's own son had done. This made her to miss her family and began to sob. Tian-Lin was playing a ball and throw it into a window on the second floor. Miss Xue had been informed in any case she was not permitted to enter that room. But the boy asked her insistently to get the ball back for him. She obeyed and entered that room. To her surprise, the room was arranged like a memorial hall with a purse hung on the wall which she recognized as the one she had given away in that pagoda. She faded. The boy ran to his mother for help.

Mrs Lu was very angry for Miss Xue had disobeyed her order. But she was also amazed by the happening so she began to query Miss Xue. When Mrs Lu found whom Miss Xue was she had her changed with new and gorgous addresses but Miss Xue did not know why.

The nanny found Miss Xue's husband, mother and son and led them to her. Her husband thought she might have done something bad so she was given good clothes. Miss Xue asked her mother to talk to the landlady to find out why. The landlady told them that she was the poor girl. She and her husband had used those in the purse to maintain a happy and wealthy life since their marriage. They were very grateful but they had not been able to locate who and where the giver was. They set the memorial room to express their appreciations.

beijing-opera The Orphan of the Zhao Family