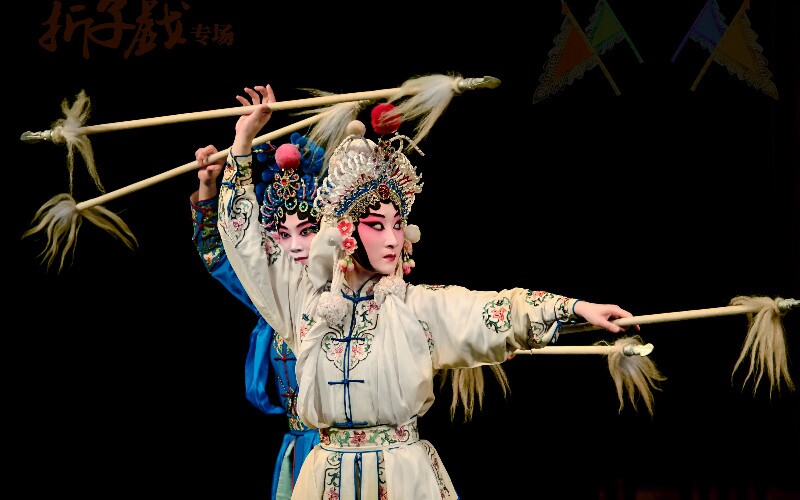 The Legend of the White Snake

This is a story adopted from a classical Chinese novel. But the story in the play is totally a different account to the origin novel. This is a traditional play but may have different arias with different performing styles.

Once upon a time in the Mountain E-Mei, there were White Snake and Black Snake. White Snake changed into a very beautiful girl, named BAI Su-Zheng (Qing Yi). Black Snake also became a lovely maid, named Xiao Qing (Wu Dan). They came to West Lake of Hang Zhou (Hangchow) for a visit. They were attracted by the beauty of the scene. There over the Duan-Qiao bridge came a young man named XU Xian (Xiao Sheng). BAI immediately fell into an unrequited love. To help her sister, Xiao Qing set a trick to let it rain and they took a tree as shelter. XU Xian opened his umbrella and came near. When he saw them, he offered his umbrella and asked them where they lived. On a quick action, Xiao Qing told him they lived somewhere near WestLake. A boat was then in sight. XU Xian called, paid the boatman and asked him to ship the two ladies to their destination and himself home. He lived with his sister's family. On the boat, they talked a little. BAI Su-Zheng began to know XU Xian a little more. The rain gradually stopped. When the boat made its first stop, Xiao Qing made it rained again. So XU Xian told them to keep the umbrella and he would take it back next day. Xiao Qing told XU that nearby there was a red mansion, which was their home.

Next day, BAI made a red mansion by her magic. XU went there as promised. Having him seated, Xiao Qing made him and BAI some tea. They exchanged a few sentences. And Xiao Qing asked XU whether he had married. When receiving a negative reply, Xiao Qing told him that BAI was also unmarried and suggested they two got married. When the three-attendee wedding ceremony was on, the Abbot, named Fa Hai, of a remote Buddhist temple, Jin Shan (GoldenMountain) Temple, sensed something and then found what was going on. He pledged to capture the white snake.

After the marriage, the three of them moved to Zhen Jiang, a city on the YangtseRiver where BAI provided her husband with a medicine shop. She used her magical powers so that all medicines became especially potent, and the business in consequence prospered exceedingly. Fa Hai found Xu Xian there and warned that his wife was a snake. He suggested Xu a way to find her real self, a festival alcohol drink for the September 9th Day. September 9th was crucial for the two snakes. There would be a moment when they had to change back to their real selves. Xiao Qing suggested to BAI that they both went back to Mountain E-Mei for the day. BAI did not want Xu sense any unusualness. She believed that her magic power could prevent her from the changing and told Xiao Qing to go alone. Xu Xian bought the festival alcohol to celebrate the day and asked BAI to drink with him. Did not want to disappoint her husband and thought she still could control herself, she agreed and finished a cup. But XU asked her a second cup. The second cup made her feel awful. She rushed to the bedroom and warned XU did not get in. Xu Xian saw her in her old form in the bed, and simply just died of fright. When Xiao Qing came back, she waked BAI up. Then risking her life, White Snake went to steal the glossy ganoderma, which was heavily guarded. Moved by her brave and true love, the owner of the drug released her and gave her the drug.

The life of Xu Xian was restored. He suddenly remembered what the Abbot said to him. Recovered from the illness, XU Xian went to the Temple. To separate him from his wife, Fa Hai forced him to become a monk. BAI, along with Xiao Qing, chased to JinShanTemple and begged Fa Hai to let her husband go but got refused. Then in anger, she gathered together a great army of underwater creatures to attack the monastery and used water to submerge the temple. Fa Hai had a magic outer vestment, which made the mountain to grow so that the waterlevel was kept under the temple. Fa Hai also had the magic to command heavenly soldiers. BAI had been pregnant. She could not fight the battle any longer.

BAI and Xiao Qing fled to WestLake to where they first met Xu Xian. Xiao Qing was very angry at Xu for his unfaithfulness and pledged to kill him when she saw him. XU was secretly released by a young monk when the two sides were fighting and happened to come to the same place. When they met him, Xiao Qing was for attacking him with her sword, but BAI held her back and told XU the truth. With fully understanding each other, they went home.

Fa Hai went to the heaven and asked the heaven emperor to help him. A powerful fighter with a magic lantern was commanded to assist Fa Hai. BAI was given birth to a son. One day, XU Xian went to buy a hat for his son. The hat was actually the lantern, which made BAI Su-Zheng physically under the spell of the fighter. The White Snake was then imprisoned under the Thunder Peak Pagoda by WestLake. Black Snake fled to her original place and practiced her magic. Several years later her magic was strong enough to take the revenge. She managed to destroy the Pagoda and rescued White Snake. White Snake reunited with her husband and her son. Black Snake then defeated Fa Hai and had him swallowed by a crab. They live together happily forever.

beijing-opera The Orphan of the Zhao Family