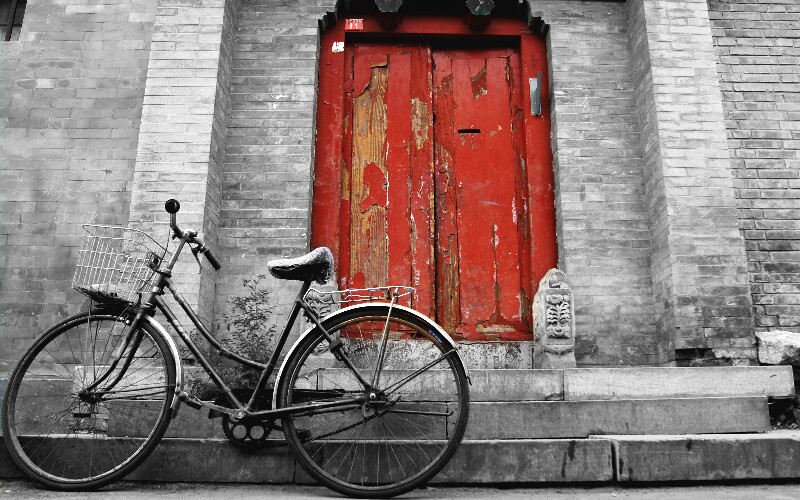 Scenery of the Great Wall

Pictures of thousands of peoples biking in the Beijing streets are a thing of the past, but cyclists are still common. Instead, there are lots of cars. There are poor neighborhoods even in Beijing's inner city, so it is still a common way to get around.

With a bike, you can have the freedom of mobility to get around off the tourist stops and see the working-class neighborhoods, and you can also quickly get from place to place.

The Beijing subway system is good, but the crowds and the long distances to walk around, and the confusion of Chinese signs and the dearth of English language signs make taking the subway and buses time-wasting, tiring and confusing for foreign visitors.

It is a well-known fact that Beijing is home to some of the worst traffic of any major city. Luckily, you can avoid spending much of your vacation time waiting around in a cab by biking your way among the sites. Although the traffic can seem daunting, it is really easy to navigate once you get the hang of things. Make sure to familiarize yourself with transportation in China.

There are many bike rental shops and stands around the city, but in order to avoid the hassle of finding the nearest one and the risk of paying too much, it may be best to inquire at your hotel or hostel. To give a rough estimate of the expected price, the Beijing Hotel in Wangfujing charges just 5 yuan per hour, or 20 yuan for the whole day, though there is a 100–440 yuan deposit depending on the bicycle.

You can rent a bicycle online through companies like Bike Beijing and Bicycle Kingdom, but expect to pay more. This may not be a bad option, however, as they offer delivery and a great selection of quality bikes.

There are places to rent bikes around tourist sites such as Houhai Lake. In this area, you can find rentals for 10 yuan per hour with a 100 yuan deposit.

Once you find a bike rental shop, which bike should you choose? Check out more cycling in China tips, including more information on renting the right bike for you.

One good route for experiencing a mix of ancient history and modern times is a bike ride straight through the center of Beijing from the Forbidden City to the Olympic Village. It’s especially fun to depart in the afternoon and arrive at the Olympic Village after dark, when the Bird’s Nest and Water Cube will be illuminated.

Start at the Forbidden City, (also beautifully lit after dark) and go to the West side, where you’ll take Nanchang Street north along the Forbidden City’s outer wall. Veer right and then left at Jingshan West street, continuing north until the street winds to the east. Then go left on Dianmen Inner street, which will take you straight to the Drum Tower.

There is a lot to see and do in the Drum Tower area — there’s the Drum Tower itself, along with a lot of true-to-Beijing restaurants and bars that give Beijing so much personality.

After exploring the Drum Tower area, you can continue straight north to the Olympic Village. The Water Cube and Bird’s Nest are truly impressive sites when lit up at night, while the Olympic Forest Park is fun to explore in the daytime. No matter what time you visit, though, there is a lot to see in the Olympic Village, and a great final destination on a bike tour through Beijing.

Depending on which leg of the itinerary you spend the time exploring, this route could be a one-hour blitz through the city center or an entire day’s (or evening’s) adventure.

Need more ideas for bike routes? Try this guide, where you'll find routes to the more scenic suburbs and the Great Wall.

One of the best ways to visit Beijing is to ride a bike and to surf the streets, sidewalks and hutongs. One suggested route is among the hutongs.

You can ride from one scenic spot to another leisurely on your own schedule. You can stop in for snacks at the thousands of restaurants. Compared to US cities, Chinese cities have maybe 10 times more places to eat and drink per square mile. So some favorite sightseeing spots and suggested routes are described herein.

The inner city of Beijing is divided into Dong Cheng (East City) and Xi Cheng (West City). So here are two routes for the East Side and West Side.

Dongcheng is the eastern part of the central city of Beijing. It is where the Beijing Train Station is, and about a million people live there. In Dongcheng, there are Wangfujing Street, Yonghe Lama Palace, Temple of the Earth, the Ancient Observatory, the Temple of Confucius, and Guo Zi Jian that was an ancient imperial academy.

This area has Xidan, the Drum Tower, Baoyun Taoist Temple, Yuetan Park and Prince Gong's Mansion. An old mostly Muslim and poor commoner area called Xuanwu District (宣武区) is a part of Xicheng District. Xuanwu District is about 16 square kilometers in area. Much of the traditional architecture was torn down to make way for Olympic venues, and the people were moved to other places. Popular tourist places there include Ox Street Mosque, Huguang Gild Hall, Fayuan Temple, and Liulichang that is an antiques market. Although the touring stops aren't as good as in the Dongcheng District, you can visit Shi Chahai Park and see the greenery and the pond and rest there and see some hutongs that are tourist favorites for the shopping, old architecture, and restaurants.

Biking in the Northern Suburbs

Baiyang Valley is about 55 kilometers or 34 miles northwest of Beijing. It isn't far, but the change of scenery from urban zone to a rugged green canyon with red cliffs is surprising since it is so close to the city. There is a scenic area there called Beijing Baiyang Natural Scenic Area (中国北京昌平区白羊沟自然风景区). The roads in the area are great for cycling, and there is an big annual bike race held there. The road is considered to be suitable for bike racing contests. The attractions in the area are some old architecture including some of the Great Wall, the valleys, trees and rugged mountains, and a reservoir and a stream that flows through the mountains and rocks.  Here is a suggested route.

Baiyang Valley is 3.7 miles long. Starting from Shahe Town (北京市昌平区沙河), turn left to Yangfang Beige Village (阳坊北葛村 yáng fǎng běi gě cūn), and then ride to the west to Liucun. Then, you can go on the creek road from Liucun (流村). The road there is quiet and flat. There are a lot of vehicles before Yangfang (阳坊). You should be careful when riding.

In order to guarantee a safe biking journey, please check and repair the bikes well before setting out. Prepare well for the sun: sunscreen and sunglasses. Be ready for a long bike ride.

Biking around the Ming Tombs Reservoir

The Ming Tombs Reservoir was built in 1958. The area of the reservoir is 20 times larger than that of the Kunming Lake of the Summer Palace. It has a capacity of more than 60,000,000 cubic meters. The reservoir is between Mangshan Mountain and Hanbao Mountain. The dam is 627 meters (0.4 miles) long and 29 meters (31.7 yards) tall. The bottom of the dam is 179 meters (195.8 yards) wide, and the top is 7.5 meters (8.2 yards) wide. You can see the words “十三陵水库” that were written by Chairman Mao. The characters are inlayed with white jade. It is quite spectacular. On the top of the dam, you can see the beautiful classic- style gallery in which you can buy artwork, cold drinks and snacks. There are docks at both ends of the dam for the visitors boating on the river.

The Ming Tombs Reservoir is located in Pingchang County of Beijing. It is 40 kilometers (25 miles) from Beijing. After the establishment of the Beijing Jiulong Amusement Park, more and more tourists have been visiting the area. When you arrive at Changping, you can go to the reservoir through Huancheng South Road and start your riding journey. The whole journey of the Ming Tombs Reservoir is 18 kilometers (11.2 miles). There are several flat mountain roads and beautiful scenery. In the morning, a lot of people ride bikes and exercise. You can enjoy yourself while riding. At noon, you can have lunch in the wood at the edge of the lake. And then, you can go back to Beijing at 3:00 p.m.

This area has a section of ancient wall called the Huanghuacheng Great Wall (黄花城水长城). It is about 25 kilometers or 16 miles northeast of the Ming Tombs in a straight line. So all these three biking destinations are in a straight line going from the northwest to the north of Beijing over a distance of 50 kilometers or 31 miles. The area is about 75 kilometers from Beijing. The Huanghuacheng Guan is also called the First Pass. It is about 1 kilometer (0.6 miles) away from Huanghuacheng, and it is one of the key passes of the wall. Going along the valley 0.6 miles to the north, you will find another pass that is called the Second Pass. At the First Pass, a dam forms a reservoir. On the giant rock of the west hillside, there are two words carved – “金汤.” What these words mean is vague. It could mean “Golden Current” or the golden Tang Dynasty. Here is a two day bike trip you can take from Changping to Huanghuacheng

You can start from Changping. There will be more and more orchards and bigger trees on both sides of the road. On the right of Qikong Bridge is the Ming Tombs Reservoir. The following mountain road is a little bit difficult, but it will be a feast for your eyes. After the watershed, you will get to Huanghuacheng. You can eat and find accommodations in a hotel. It is a popular tourist area. If you still have energy, you can climb the Jintang Great Wall. On the second day, there will be another challenge for you to bike on the Silver Mountain and the mountain road of Xingshou. Finally, after visiting Xifu Town, you can go back to Beijing.

Huanghuacheng is located 29 kilometers (18 miles) northwest of Huanrou County pass. The Huanghuacheng Great Wall is one of the few Great Walls in Beijing that link the mountains and river. It combines the advantages of the Badaling Great Wall and the Longmen Gully. It is famous for being embosomed by yellow chrysanthemums annually. It is a resort with charming scenery, quiet and pleasant environment, and good climate.

China Highlights can help you design a tour to bike around Beijing, or just see our Beijing tours.