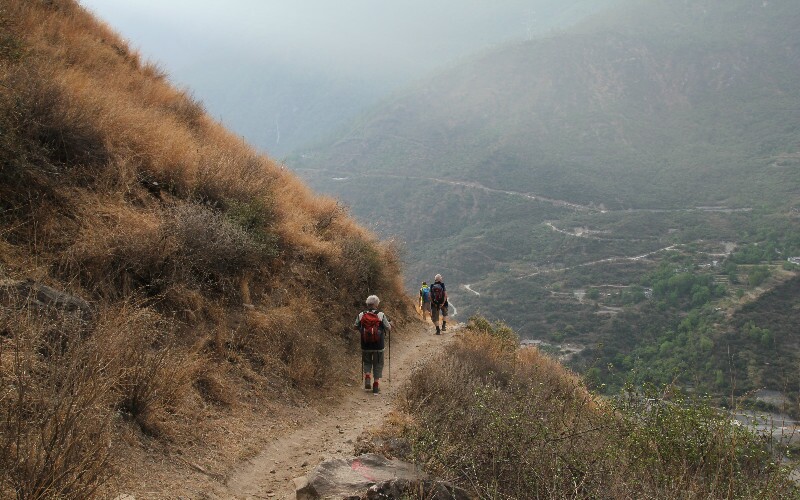 Tiger Leaping gorge  is considered one of China's best hikes. It isn't very strenuous except for the initial climb along a series of switchbacks near the entrance to the gorge at Tiger Leaping Gorge Town. If one walks the trail slowly, takes advantage of the accommodations and is in good shape, the trail isn't strenuous. The inns and hotels for backpackers along the way make the trek comfortable.

It is strenuous if you attempt to do the whole thing too quickly however. The scenery is spectacular, and backpackers generally say that it is worth it. Though it is one of China's popular trails, it is not crowded. Mainly foreigners, Americans, Europeans, and Israelis, take the high path above the river. Few Chinese tourists hike it, though you'll see the native people using the route and grazing their animals. So it isn't a crowded tourist pathway. According to what some people say, you may pass about one group of hikers each hour.

The path isn't really dangerous either, except when it rains, when there are gusty winds, or where there are rockslides. Rain makes the rocks slippery and the path muddy. Walking over a fresh rockslide might be tricky. There are places where you have to walk carefully next to a cliff, and the path gets very narrow in some places. For safety, it is best to go with a group. It is easy to get a little lost. But take a good map so that you know where the hotels are. The rainy season extends from June to September. To avoid the rain, you could go in the fall. If you walk off the path, be careful.

The medical facilities in the immediate area are poor. Even in Lijiang, the hospital staff may not speak English. Foreigners may have a difficult time getting medical treatment. Recently, a foreign tourist was badly injured in the area, and he was taken to Lijiang. He didn't have medical insurance, and the staff didn't treat him. An emergency medical team from another city flew in to take him to Hong Kong.

The gorge consists of three parts: the upper, middle and lower gorge. The upper gorge is nine kilometers from Tiger Leaping Gorge Town, and its degree of difficulty is the lowest one among the three, where most tourists prefer to visit. The drop of the river in the middle gorge is high, especially in a rock region named "Mantianxing"(满天星); a lot of foreign backpackers enjoy hiking there. A dangerous region named "Slippery Flagging" (滑石板) connects the middle and the lower gorge. The lower gorge has a one-kilometer-deep cliff, near the exit point of the spot.

One of the attractions in the area is the cave drawings that have been found in caves. There were cavemen in the area, and some implements and artifacts have been found. There are also branch trails and local paths and hamlets about. You can walk among them. Some people go down to the"middle rapids." Two paths go down there that are probably more dangerous than the main path. The High Trail extends for 30 kilometers or about 19 kilometers further than the road along the river down below. You can see other highlights that the tour buses don't reach.

At present, there is one main trail that runs the length of the valley called the High Trail. Here is a recommend two day hiking tour.

On the first day, hike from Qiaotou to Halfway Guesthouse. The whole distance covered on the first day is about 17 kilometers, and you'll hike for about six hours in total. Halfway Guest House really is at the halfway point on the High Trail. First, hike for two hours to Naxi Family Guesthouse and have lunch. Then continue to hike another 2 hours up the steep switchback called 28-bends before the next break. The views are unforgettable. After a break, hike another one or two hours, and then we will arrive at Halfway Guesthouse which has a great view of Yulong Snow Mountain and overlooks the Jinsha (Golden Sands) River Valley. You can sit out on a deck facing the mountain, and there are hot showers and clean beds.

Hike down to Tina's Guesthouse (about 2 hours) and pass through some pretty waterfalls and canyons on the way. And then walk for 1 hour down a side trail on the steep cliff to the bank of Jinsha River to see the Mantianxing Reefs. This is a another narrow part of the gorge. Continue along the road to the Lower Gorge (about 1.5 or 2 hours) where there is a ferry across the River to Daju.

Located at the entrance to Bendiwan Village (本地湾), the inn has a special washroom which is known as "the best washroom in the world" with a big viewing gazebo above. There are about 50 beds in the inn, so some tourists pitch tents in the yard in the busy season; however, sometimes there may not be any hot water supply or electricity supply.

It is on the only way to the middle gorge. There are about 40 beds and foreign residents usually stay there.

It is located in a walnut garden with its back against Haba Snow Mountain; its yard is filled with flowers and it has a good view of the gorge. Both Chinese food and Western food are offered with good flavors in good surroundings. It is said that in ancient times, local people controlled and timed their lives by observing sunlight shining on the cliff of Zhaozhai (赵寨), and the landscape of the cliff formed 18 faces, which contributes to the name of "Shanbailian" (which means 'white faces on the hill').

China Highlights can help you customize a hiking trip along the gorge, or just see our Tiger Leaping Gorge Hiking tour.