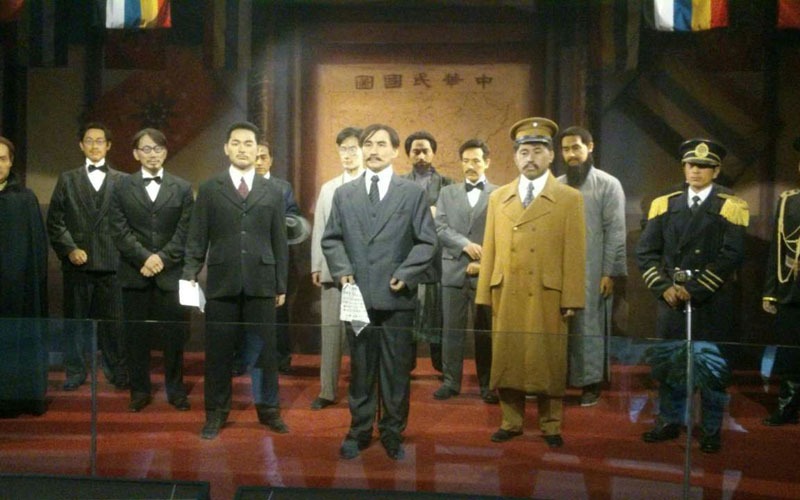 Yuan Shikai (1859 – 1916) was a Chinese politician, militarist, general, warlord and the first official or formal President of the Republic of China. He had huge influence during the last days of the Qing Dynasty (1644–1912) and the beginning of the Republican era (1912 – 1949). Here are top ten facts about China's greatest general.

1. He was the first official president of the Republic of China.

The Presidential Palace in Nanjing

Yuan Shikai was named the first official president of China on February 15, 1912 after the abdication of Qing Dynasty's last emperor Aisian-Gioro (Puyi) who became emperor at the age of 2 years, 4 years earlier, after being summoned by Empress Dowager Cixi, the true, behind-the-curtain ruler at the end of the QIng era.

After the 1911 Revolution, Yuan Shikai negotiated the abdication of Puyi, which led to the formal fall of the Qing Dynasty after a brief civil war with Sun Yat-sen's forces. Sun Yat-sen was the provisional president until Yuan Shikai took power.

2. He was the self-proclaimed "last emperor of China".

He attempted to bring back imperial rule and was unanimously appointed Emperor of China on November 20th, 1915 and subsequent swearing in on December 12th, 1915. The Presidential Palace was renamed Xinhua ('New China') Palace.

His argument was that the republic had failed and an autocratic monarchy would be the one to unify Chinese people. However his imperial ambitions were ended three months later by Republican generals. Yuan, disheartened, died of kidney failure two months later.

3. He was based in Beijing.

The Forbidden City was the seat of power from 1420 until Yuan Shikai's rule began in 1912.

He built a palace in Zhongnanhai, just west of the Forbidden City. Last Emperor Puyi lived at the imperial palace until he moved to the Summer Palace in 1912.

General Yuan created the current main gate to Zhongnanhai, Xinhua Gate or "Gate of New China," which was a new entrance from Chang'an Avenue, independent of the Forbidden City.

The yuan note is the modern equivalent of the Yuan Shikai dollar.

The Yuan Shikai dollar was the earliest form of official money in China in the form of coins first issued in 1914 by Yuan Shikai. It became a dominant coin in China.

It was first minted by Tientsin Mint (Tianjin Mint), and used at least until 1929, with the total minted estimated at 750 million pieces.

5. He built the Villa of Yuan Shikai in Tianjin

The Former Residence of Yuan Shikai in Tianjin

He lived in Tianjin before relocating to the country's capital. His former residence (39 Haihe East Road, Hebei District) is now a hotel.

The posh Austrian mansion, was designed by English designers and built in 1908. It is located beside the Haihe river.

Yuan Shikai approved the construction of the Beijing-Zhangjiakou Railway, China's first railway, in 1905.

He raised the money and supervised its building.

He founded Shandong College, a provincial junior college and forerunner of Shandong University) in Jinan, which adopted western ideas of education.

Shandong University was established in 1901 under Yuan's advocacy. It is one of the largest universities in China today.

8. Japan forced him to give away Jiaozhou Bay and the Jiao–Jinan Railway.

Japan sent troops to take over German occupied territory in Jiaozhou Bay and the Jiao–Jinan Railway in Shandong Province.

Shikai was forced to sign the Twenty-One Demands. European countries were at war in Europe after World War I broke out in 1914 and could not help Shikai resist Japanese interference.

9. He was the Qing Dynasty’s most successful military commander.

He was appointed by General Zhang Xueliang to go to Korea to support administration there. Due to his successes and fame in Korea, Shikai was appointed to be in charge of training new Chinese army after China's humiliating defeat by Japan during the Sino-Japanese War.

10. His portrait, painted 100 years ago, was recently donated to Capital Museum.

6 portraits of dignitaries of the late Qing dynasty including those of Li Hongzhang, Yuan Shikai and Prince Yi Kuang, were donated to Beijing's Capital Museum in 2011 by a grandson of the Dutch painter Hubert Vos, who painted them more than 100 years ago.

They were stored at Harvard University but the grandson refused a request by the university to collect them saying it is better for them to go back to their original home in China.

Explore Chinese History with Us

The Forbidden City is probably the best place to go to appreciate Beijing and China's history.
Create my trip